48North Cannabis (TSX-V: NRTH) Is Worth a Closer Look

How to Triple Your Cash in 6 Weeks

It’ll likely go down as the biggest IPO of the year.

Beyond Meat (NASDAQ: BYND), the company that makes a pretty spectacular plant-based burger, debuted less than two months ago.

Since then, the stock has climbed more than 313%.

Those who got in early made a boatload of cash.

Those who are chasing it now, however, are going to lose a lot of money.

Although Beyond Meat is a solid company that will do very well in the coming years, those who choose to buy the stock now are going to lose a fair amount of cash.

The bottom line is that chasing stocks like these — after all the big money has been made — is a very easy way to lose money.

That stock launched out of the gate like a juggernaut, making early investors small fortunes but setting up the latecomers for huge disappointment.

Take a look at what happened to Tilray after the enthusiasm wore off and reality set in: 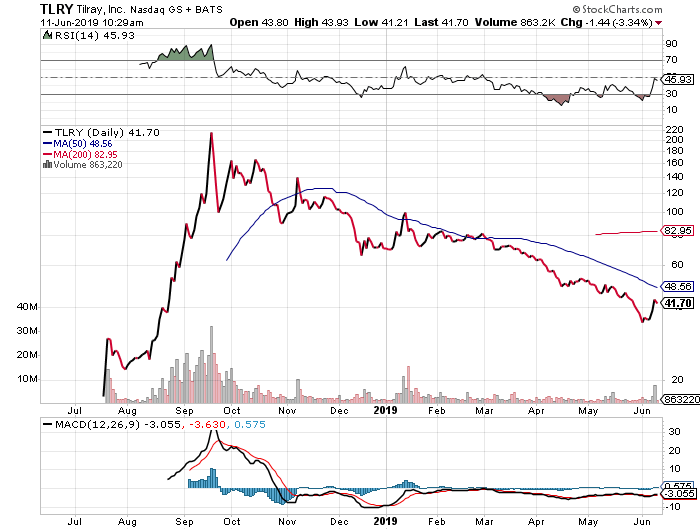 Of course, those who got in early couldn't care less. And who could blame them? They made a fortune.

Truth is, I’m always looking for new ways to get in early on stocks just like these, then unload them at their peaks. That’s actually when you see a flood of buyers willing to take your overvalued shares.

And these don’t have to just be IPOs.

In fact, I spend a lot of time finding undervalued stocks, buying them on the cheap, and then selling them on quick upward moves.

I even started a small trading group that does nothing but buy and sell these stocks — on a weekly basis.

It’s called the Weekly Score, and since launching it earlier this year, I’ve locked in 10 double-digit gains, with only three losers.

But I’m not telling you about this to brag.

Instead, I’m telling you about this to point out an opportunity for you to make a ton of cash. And relatively fast, too.

My Next Big Winner

This is a licensed Canadian cannabis producer that recently fell into “undervalued” territory.

Then, last month, the company accelerated its warrant expiry date, which will give it an extra $13.5 million.

With all that cash, 48North is planning to make some big moves, but most investors aren’t paying attention to these details.

What makes this particularly interesting, too, is that earlier this week, the company announced that it signed a supply agreement with the only cannabis wholesaler and online retailer of recreational cannabis in Ontario.

You don’t need to be a rocket scientist to figure this one out. Which is why I personally picked some up while it’s still cheap.

48North is about as undervalued as they come, and hardly anyone on Wall Street is paying attention. And this is why I’m in.

Truth is, what I see with 48North is what I’ve seen in the past on every one of the double-digit trades I’ve pulled in this year: opportunity. And there are plenty more of these to come — at least 31 more this year, as I make new trades every single week.

Or, if you want to learn more about my process of identifying and, of course, capitalizing on these trades, click here now.

Investing in New York Cannabis Stocks
The New York cannabis market is growing rapidly... and it's not even legal for recreational use yet. But legalization is coming soon thanks to a measure put forth by Governor Andrew Cuomo, and Jeff Siegel has the stocks to watch.
Energy Politics from New York City
Former New York Mayor Michael Bloomberg wants to give away $500 million to end coal power in the U.S. Energy and Capital editor Christian DeHaemer says this is just more politics and tells you how you can still profit from coal.
Guns, Gold, and Textbooks?
Last week, Energy and Capital editor Luke Burgess explained why socialism was coming to America. This week, he dives into how you can profit from it when it finally arrives...
Hydrogen Fuel Cells: The Downfall of Tesla?
Lithium has been the front-runner in the battery technology market for years, but that is all coming to an end. Elon Musk is against them, but Jeff Bezos is investing heavily in them. Hydrogen Fuel Cells will turn the battery market upside down and we've discovered the tiny company that is going to make it happen.