Predicting the path of the Gulf Oil Spill is no easy task. NOAA is viewed by some as the authority in this field. But they're currently only providing 24, 48, and 72 hour trajectory forecasts to the public.

Recently the National Center for Atmospheric Research (NCAR) weighed in on the issue. The video below shows results from a 4-month computer simulation, showing a path that could take the oil spill all the way to Cape Hatteras, North Carolina, and far out into the Atlantic. As you can imagine, it's stirred up quite a bit of controversy.

Here is more information on the video from NCAR. Note: this was published June 2nd 2010, 8 days ago. Since then, estimates on how much oil is leaking into the Gulf have at least doubled. So I would expect a current version to show higher concentrations of oil.

This animation shows one scenario of how oil released at the location of the Deepwater Horizon disaster on April 20 in the Gulf of Mexico may move in the upper 65 feet of the ocean. This is not a forecast, but rather, it illustrates a likely dispersal pathway of the oil for roughly four months following the spill. It assumes oil spilling continuously from April 20 to June 20. The colors represent a dilution factor ranging from red (most concentrated) to beige (most diluted).  The dilution factor does not attempt to estimate the actual barrels of oil at any spot; rather, it depicts how much of the total oil from the source that will be carried elsewhere by ocean currents. For example, areas showing a dilution factor of 0.01 would have one-hundredth the concentration of oil present at the spill site.

The animation is based on a computer model simulation, using a virtual dye, that assumes weather and current conditions similar to those that occur in a typical year. It is one of a set of six scenarios released today that simulate possible pathways the oil might take under a variety of oceanic conditions. Each of the six scenarios shows the same overall movement of oil through the Gulf to the Atlantic and up the East Coast. However, the timing and fine-scale details differ, depending on the details of the ocean currents in the Gulf. The full set of six simulations can be found here. (Visualization by Tim Scheitlin and Mary Haley, NCAR; based on model simulations.)

The video above shows 6 models. Note: the "virtual dye" in these models was injected near the surface. Other models that inject the dye deeper show a less dramatic spread. 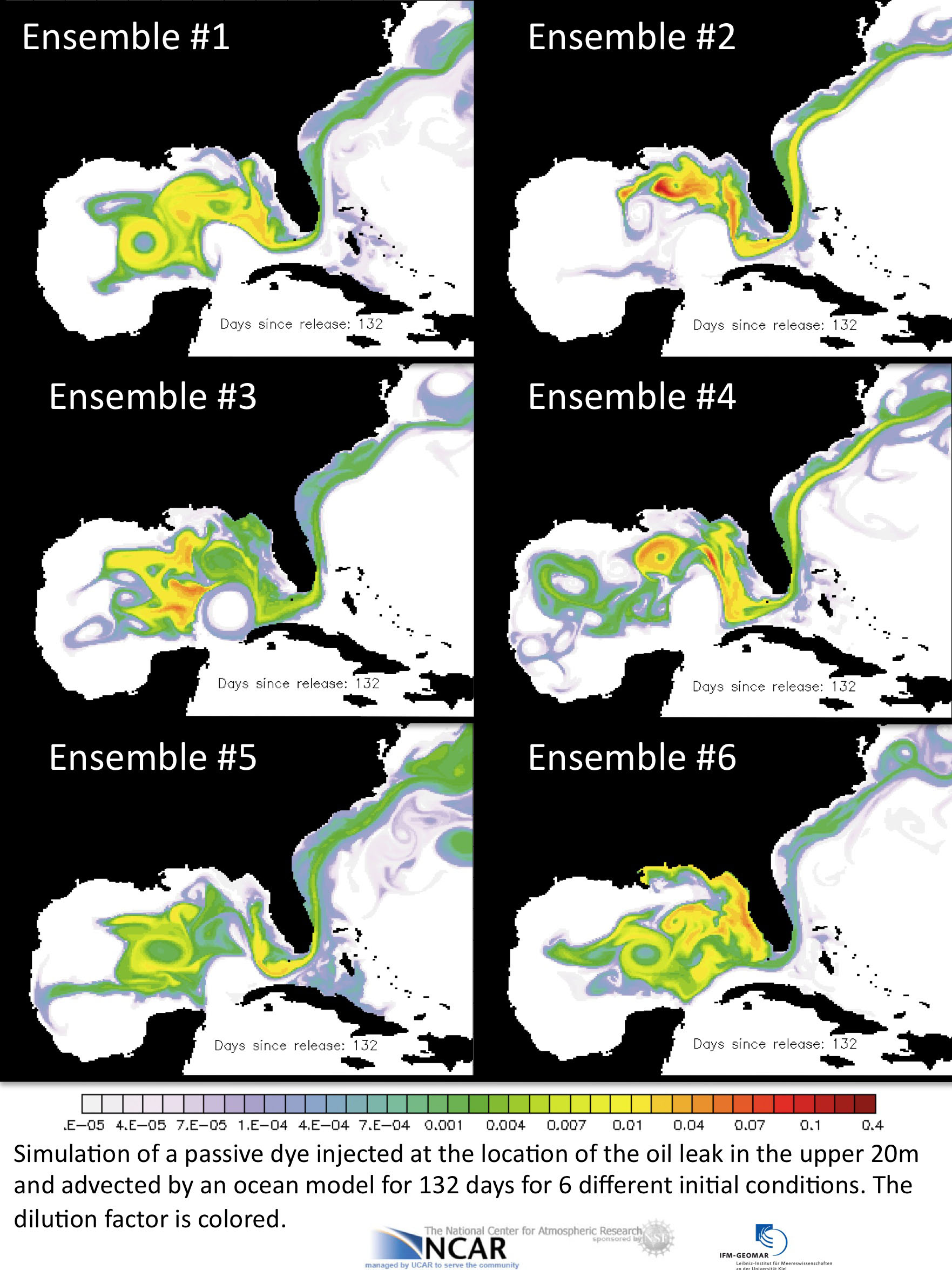 See more of these models at NCAR's website. There are tons more videos, graphs, PDFs, and more for those who are interested.

And check back soon for more charts, video, and pictures as we learn more about this ongoing disaster.