On the back cover of my 2008 book, Profit from the Peak: The End of Oil and the Greatest Investment Event of the Century, Professor Charles Hall wrote:

This book is a clearly written, succinct, and well-referenced summary of information about, and related to what I believe will be the most important issue to strike Western civilization ever: The end of cheap oil.*

In the August 2012 issue of Oil and Gas Investor Magazine in an article titled, "From Peak to Plateau?" Ray Leonard, president and CEO of Houston-based Hyperdynamics Corp., says:

The age of plateau oil is also the age of price-sensitive oil. All the cheap, easy oil is gone.*

The only question is how do we deal with that reality.

What are we willing to pay for? Generally $70 to $90 is the transition range. Below $90 a barrel some production becomes marginal. Below $80 you start to see decrease in production. And $70 is the floor.

As legendary resource investor Rick Rule has said many times before, Peak Oil is not just a geological event. It's also an economic event.

Let me clear up any confusion...

What Peak Oil means (and has always meant) is it will cost us more resources to produce the oil that's leftover.

It's all about accessibility. The more accessible a resource is, the cheaper it is to get. The less accessible, the more it will cost... pretty straightforward, if you ask me.

Gasoline prices across America are still close to historical highs — and in California (though it's the result of local events), prices are at all-time highs! 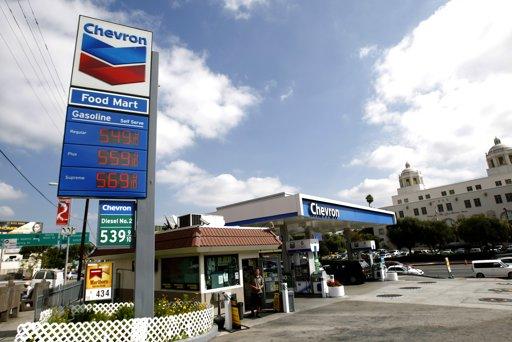 This hasn’t stopped a plethora of investment analysts to come out and declare the global oil crisis is solved by the miracle of fracking... but most of their analysis is amateur at best.

Make no mistake; horizontal and hydraulic fracking in the United States is a miracle. In fact, America is in a bona fide energy supply boom, an oil and gas renaissance.

And that was the core thesis of my 2008 book: that the high price of oil would spawn a drilling boom by innovative companies responding to price and the profit motive — in other words, the free market. (We've seen exactly that in the Bakken and Eagle Ford Shale oil formations.)

But in all of the analysis, I haven’t read one shred of data that talks about the decline rates of existing oil fields...

There’s no debate: The super giant oilfields are in decline.

We have covered this fact ad nauseam in Energy and Capital.

The 20 largest oil fields in the world account for roughly 25% of total global oil production. The majority of these giants are already in decline. And predictions point to Saudi — and much of Mideast — oil exports dropping to zero as their population growth surges.

In other words, the surge of domestic oil production in the U.S. is merely offsetting current decline rates of old production.

We are simply replacing lost production at a time when demand is still rather robust.

We’re on a treadmill going nowhere... and that means that oil prices are destined to remain high.

Just as recently as seven or eight years ago, $70/barrel oil would’ve been unthinkable.

I can remember back in 2005 when oil prices breached $50 a barrel that summer... The so-called experts called it everything from a “bubble” to a “crisis” to a “conspiracy.”

In fact, just after Hurricane Katrina (oil prices launched to a record high of $70 a barrel), Steve Forbes said oil was in a bubble and that the price of black gold would come down to $35 a barrel.

It never did. And it never will.

It’s simple: It costs more to get shale oil. Period.

Co-author of Profit from Peak Chris Nelder wrote over the summer:

Producers in the Persian Gulf, North Africa OPEC, Russia, Venezuela and Canada report "reserves" estimates that can only be economically produced if oil prices are at least double the $70 per barrel assumption in his analysis. He [Harvard professor Leonardo Maugeri] does not provide any further details about the economics of production in his analysis, except to say that "More than 80 percent of the additional production under development globally appears to be profitable with a price of oil higher than $70 per barrel."

This claim seems highly dubious given recent estimates of production costs. Research by petroleum economist Chris Skrebowski, along with analysts Steven Kopits and Robert Hirsch, finds a new barrel of production capacity in deepwater, some OPEC countries, the Canadian tar sands, and Venezuela's Orinoco belt will cost up to $80 or $90 a barrel. Canada's Globe and Mail reported in June that $80 a barrel was low enough to cause several tar sands operators to slash their expansion plans.

And a recent report from Bernstein Research found that the real floor of new production in 2011 was around $92 a barrel, and will be closer to $100 a barrel this year.

We also know that the cost of new oil production has been climbing sharply in recent years, along with the cost of all commodities, as shown in the following chart. Maugeri acknowledges this fact, noting, "Over this decade, another problem affecting the production of all shale/tight oil plays in the United States will be the inevitable rising costs of services, rigs, labor, and pipelines, caused by the inflationary pressure from the frenetic activity throughout the shale/tight oil and gas sector." This does not square with this subsequent assertion that "the advancing knowledge of shale oil development and the gradual expansion of the infrastructure necessary to each shale play should balance the rising costs, and eventually drive them down," and he offers no empirical basis for it.

Likewise, his acknowledgement that "the oil market will remain highly volatile until 2015 and prone to extreme movements in opposite directions, thus representing a major challenge for investors, in spite of its short and long term opportunities," doesn't square with his assumption of a minimum $70 per barrel holding firm through 2020 and beyond.

You might recognize the name Maugeri. He's the Harvard professor who recently published the glowing report "Oil: The Next Revolution," which argued that the world is on the cusp of an epic energy revolution based on fracking.

It may be true that we are entering a new oil revolution, but we will pay more for it.

Ten years ago, China and India were just beginning to enter the Automobile Age.

Although their economies are slowing, to catch up with America in terms of car ownership will strain the current oil production infrastructure. That's why China and India are attempting to buy U.S. oil and gas resources.

In terms of oil consumption, China has a lot of room to grow: 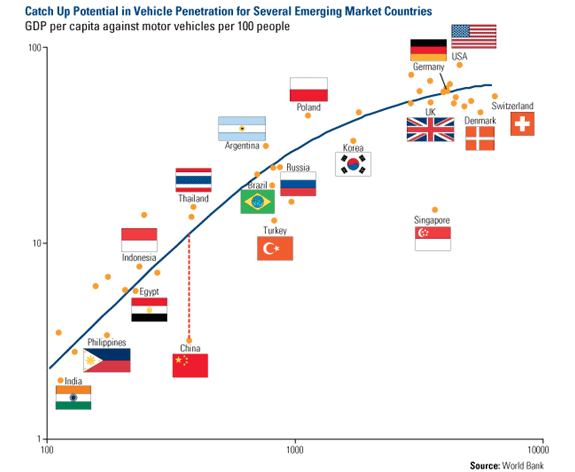 And catch up they will. It's only a matter of time.

Arab Spring. Israel/Iran tension. Potential war. Supply disruption. Pick your poison. All of these issues go with us into 2013, and the risk premium — which I calculate to be around $10 per barrel — will remain.

In fact, I think this risk premium could increase next year...

Just yesterday a fresh report was released that predicted a doubling of oil prices if Iran was permitted to get a nuclear weapon. According to news about the report:

Oil prices “could double,” increasing the U.S. price of gasoline by up to $2.75, if Iran is permitted to obtain a nuclear weapon, according to a new economic analysis by a bipartisan team of current and former government officials.

While much attention has been given to the costs of preventive military action against Iran, a new report by the Bipartisan Policy Center shows that, over time, “gasoline prices could increase by more than 70 percent,” sending America “into a severe recession” and costing the country “more than five million” jobs.

“If any of the conflicts or energy disruptions that become more likely from a nuclear Iran actually occur, the energy impact and economic consequences would be more severe,” the report states. “Inflation could skyrocket to almost 5 percent,” leading to widespread job loss.

Authored by a team of former military leaders, economists, and lawmakers, the report examines a handful of scenarios that could result if Iran is permitted to obtain a nuclear weapon. In each outcome, oil and gasoline prices increase exponentially.

Another risk that really worries me is an outright ban on fracking in the U.S. If the EPA bans fracking, that means anywhere from 1 to 2 million barrels per day could come offline. That would be disastrous.

And that's my point.

One has to wonder how, when oil production in the United States is booming, we are still paying over $3.50 per gallon for gasoline.

The answer is simple: There's no slack in the system. It's a super tight oil market — and it will only get tighter. And the market knows this. It's pricing in the potential for all of these scenarios.

And I believe at least of one will hit home next year...