An Electric Car You Can Actually Afford!

That's what the PR guys and leggy models always tell you as they recite their boilerplate pitches in front of massive displays of cars, trucks, and guys in white lab coats. Then they hand you a pen or a mini-flashlight and move on to the next person in line. I'd say they're right about ten percent of the time.

Still, I'd be lying if I said I didn't thoroughly enjoy checking out all the latest gadgets, technologies, and concepts the automakers roll out every year at the Detroit Auto Show... especially over the past few years, where hybrids and electric vehicles have taken center stage.

Of course, this year it was less about fuel economy and more about muscle; GM made a huge splash with its new 2014 Corvette Stingray.

Still, there were a number of new hybrids and electric vehicles on display that upped the ante on performance, design, and even price... 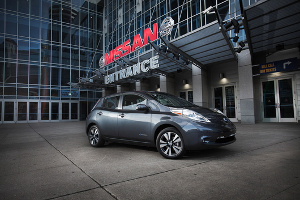 The Nissan LEAF has become the first household name in pure electric cars.

The all-electric vehicle debuted a couple of years ago and has sold about 50,000 units globally.

Although this may not sound like much, consider that the first year Toyota's hybrid superstar Prius came out, only 3,000 units were sold, and the following year, only 20,000.

Still, Nissan needs to get more units out of its factories and on the roads. And while sales have been relatively good, given the nature of the disruptive vehicle technology, the Japanese automaker has fallen short of sales goals.

So in an effort to improve sales, Nissan's 2013 LEAF will sell at an 18% discount. The company can actually pull this off, as its manufacturing costs are falling with its production moving from Japan to Tennessee.

At this price, California residents, who get a $2,500 tax credit, can get a brand-new Nissan LEAF for $18,800 — or about the same price of a size-comparable internal combustion vehicle. Of course, this one won't require you to spend a dime on 87 octane.

Now, I'm not saying the new price will definitely increase sales, but certainly this will put the vehicle's purchase price well within range of a few more car buyers who want the environmental and national security benefits that come with owning an electric vehicle, but until now just haven't been unable to come up with the cash. 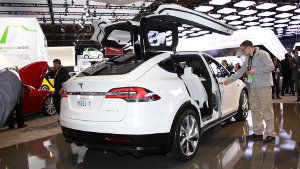 Tesla brought some excitement to the Detroit Auto Show again this year as it showed off its electric SUV crossover, the Model X.

Due out in 2014, the Model X is Tesla's version of a family vehicle that can take you from 0 to 60 in five seconds.

This particular vehicle was actually unveiled last February, but the company used this year's Detroit Auto Show to show off its interior...

And while the interior is certainly impressive, I'm more interested in how far the vehicle can go on some homemade domestic electrons. Word is the model X is expected to deliver an all-electric range of between 250 and 300 miles (though it should be noted that no official numbers have been released by the company).

The all-electric SUV crossover is likely to run you about $58,000 before the federal tax credit. Certainly not a cheap vehicle, but at roughly the same price, Tesla has had little problem selling its Model S. And to be honest, Tesla's not a company I'd bet against.

No, they probably won't do the numbers that GM, Nissan, and Toyota will do over the next few years... but they don't have to.

And that's why I expect to see Tesla pumping out the cream of the crop in electric offerings for years to come. 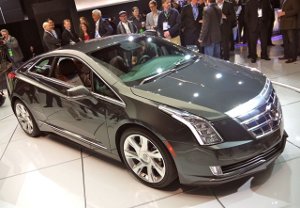 Basing its powertrain on that of the Volt, GM's new Cadillac ELR was unveiled this week in Detroit.

This vehicle is intended to be the first luxury electric coupe in GM's lineup — and word is it's looking to position this vehicle as a competitor to Tesla's higher-end offerings.

Although I do think the Chevy Volt is one hell of a great car, I believe the company's going to be in for a tough ride with the ELR — unless the price is ridiculously low.

Looking at the vehicle, it just doesn't have the same modern look, sparkle, and shine that we see from Tesla. As well, it's really an apples-to-oranges comparison in that the ELR is an extended-range vehicle, while Tesla's offerings are pure electric.

Quite frankly, I think GM would be better off focusing on price reductions on the Volt or a cheaper extended-range vehicle that maybe wouldn't be as shiny as the Volt, but would deliver greater fuel economy at a cheaper price.

If you want to get these vehicles on the road, I don't think pumping out expensive, high-end vehicles is the way to do it — at least, not ones that look like the ELR.

The only reason Tesla can get away with it is because when it comes to vehicle design and performance, it's in a league of its own.

This isn't your Father's Prius 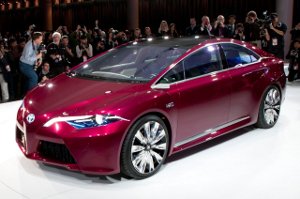 But the real star of Toyota's lineup was the NS4.

Some are calling it the Prius of the future, but Toyota insists it isn't part of the Prius family.

A dedicated plug-in hybrid electric vehicle (PHEV), it's more fuel efficient, offers a longer all-electric range compared to the PHEV Prius, and comes with better acceleration as well. Charging times are also expected to be shorter.

But the real sell on the NS4 is that its really upping the ante on what consumers can expect from a PHEV...

First, the NS4 comes with a Human-Machine Interface (HMI) that provides a user interface built around a multi-touch screen.

It basically looks and feels like a smartphone. The multimedia and vehicle-controls of the HMI system can direct air conditioning, audio, battery charging, and navigation functions. It can also “learn” driver preferences and habits to anticipate driver responses in specific environments and situations.

Toyota is also using the NS4 to showcase its new glass technologies that are integrated into the windshield and front triangle, door, and rear windows. These new technologies allow for improved driver visibility, gas mileage and electric drive mode mileage efficiency.

This really is some next-generation stuff. And here's how Toyota is touting it:

President and COO of Toyota Sales USA told reporters that by the middle of the decade, the automaker plans to transfer its plug-in hybrid technology into other models — and also aims to launch a midsize sedan that runs on hydrogen fuel cells.

Change is coming, my friends... fast and furious.

Embrace it. Enjoy it. And most importantly, profit from it!