2013: Demand for OPEC Oil to Decrease

That's not just wishful thinking; it's a fact. OPEC itself has forecast a decline in demand for its product.

The Organization of the Petroleum Exporting Countries released its report today, downgrading its 2013 demand forecast for the second time in two days to show a 400,000 barrel-per-day drop in demand from this year.

That's not insignificant for the Organization, whose members rely heavily on oil production to drive their economies.

World oil demand will also grow less than expected, averaging a growth of only 770,000 barrels per day for total demand of 89.57 million bpd.

“The forecast oil demand growth has a notable downside risk, especially in the first half of the year,” said the monthly report from OPEC's Vienna headquarters. “Much of the risk is attributed to not only the OECD, but also China and India.”

Still, even if it's by a smaller margin than originally expected, global oil demand is still increasing. OPEC oil demand, on the other hand, is falling.

Non-OPEC supply is what will fulfill that demand increase. With an anticipated growth of 0.5 million bpd this year, non-OPEC production will grow to 0.9 million bpd next year from growing suppliers like the U.S., Canada, South Sudan and Sudan, Brazil, Australia, Kazakhstan, and Russia, RTT News reports.

Growing U.S. production, particularly from unconventional reserves, could be a major reason for this demand decline. As the chart shows, U.S. OPEC imports have been declining for the last four years – as the shale boom gained momentum – and as domestic production increases, the trend will likely continue: 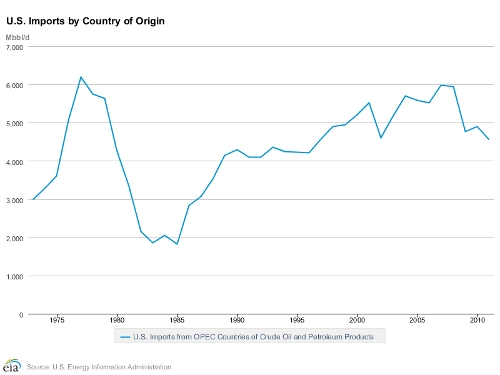 OPEC has already slowed production down. Iran in particular has seen a decline of 47,000 barrels per day after sanctions from several Western nations, including the U.S., hurt its exports.

Nigerian output has also been damaged, in particular by flooding in the Niger Delta region and by pipeline siphoning and attacks.

Meanwhile, the U.S. Energy Department reported yesterday that domestic oil production hit a high not seen since 1994. Domestic production is now at 6.68 million barrels per day.

“Every added barrel we make here is another barrel we don't need from somewhere else,” said Kyle Cooper, director of commodities research at IAF Advisors, a Houston consulting firm. “U.S. production could reach 9 million to 10 million barrels per day in another five to 10 years.”

And though that high number won't cut out imports (U.S. demand is closer to 18 million bpd), it could cut out the oil imported from OPEC, which was at 4.5 million bpd last year.

Here's to independence from OPEC.

Shale Oil's Threat to OPEC
North America's shale oil glut could shake up OPEC exports.
The End for OPEC Crude
What happens when the Organization of the Petroleum Exporting Countries can no longer export?
OPEC Forecasts Oil Demand Growth Slowdown
OPEC will not have to increase production for 2013 if demand growth slows as forecast.
Hydrogen Fuel Cells: The Downfall of Tesla?
Lithium has been the front-runner in the battery technology market for years, but that is all coming to an end. Elon Musk is against them, but Jeff Bezos is investing heavily in them. Hydrogen Fuel Cells will turn the battery market upside down and we've discovered the tiny company that is going to make it happen.