We are edging ever closer...

The date is locked in, with billions of dollars on the line.

Certainly, it will mark a critical moment for the U.S. natural gas industry.

In February or March 2016, the United States will finally start shipping liquefied natural gas abroad, signifying a 180-degree turn since 2008.

Cheniere Energy (NYSE: LNG) is scheduled to begin sending shipments from the first of four processing facilities at their Sabine Pass terminal. The Sabine Pass project sits roughly 3.5 miles off the Gulf Coast; at first, it will only be able to process a little more than eight million metric tons of LNG from two of the four planned trains.

Despite being the first project in the U.S. approved to export LNG, we weren't wholly convinced this new outlet for natural gas producers would really take off...

The first sign of trouble came in a budget hearing when former Energy Secretary Steven Chu was grilled by Congress about why we would even wantto export our cheap natural resources.

One look at what other countries are paying for the same resource, and it's easy to question any benefits to losing our edge: 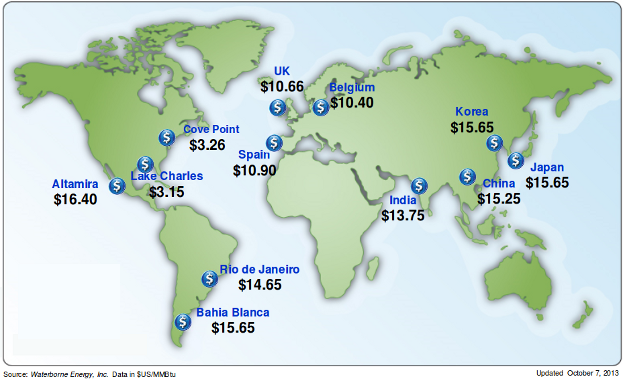 Exporting natural gas to Europe and Asia — where prices are more than double and triple what we're paying in North America — will directly cause prices to rise here in the States...

Which in turn would increase costs for the manufacturing sector.

The argument has some weight if you buy into the advantage natural gas gives both the manufacturing sector and the U.S. economy.

The shale gas boom reportedly supported 870,000 jobs in 2015. Over the next 25 years, the shale gas industry will generate more than $933 billion in tax revenues for local, state, and federal governments.

It's helped create over half a million manufacturing jobs over the past five years and could create more than five million additional jobs over the next six.

And if you don't think the government can delay these types of energy projects, look no further than the mess surrounding the Keystone XL Pipeline.

Now, I'll be the first to admit I haven't been among the most ardent and outspoken supporters of Uncle Sam becoming a heavy natural gas exporter.

But to be honest, I've slowly been warming up to the idea. If there's one sure-fire way to make me jump the fence, it's with numbers...

The Department of Energy's December 2012 report evaluates the impact of potential LNG exports on the U.S. economy. (Click here to view the full report.)

In every one of the reference cases, they saw a net benefit to the U.S. — with natural gas production increasing by as much as two trillion cubic feet. 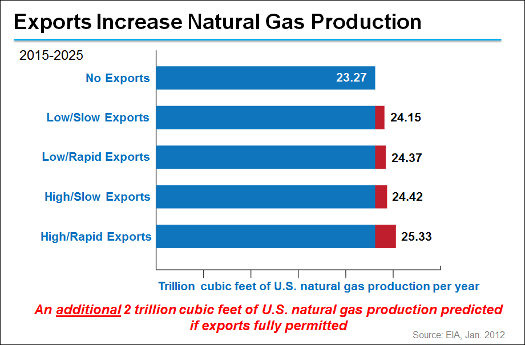 The real kicker is the report's conclusion regarding the manufacturing sector: “Manufacturing sector output decreases by less than 0.4% while EIS and electric sector impacts could be about 1% in 2020 when the natural gas price is the highest.”

Unfortunately, boosting production might not prove as easy as you'd think...

If you break down previous U.S. gas production using the EIA's own data, you'll find that production was either flat or declining in every area exceptshale gas wells (click chart to enlarge):

To put it bluntly, the success of U.S. LNG exports will depend on how well we develop our shale gas resources. And so far, the numbers say it's working. The U.S. is producing about 30 trillion cubic feet of natural gas even as conventional production circles the drain.

Race for the Prize

Canada and the United States find themselves in a heated battle over who can reach LNG customers in Europe and Asia first. Both these places are promising, especially China, since neither will meet their respective demands for natural gas in the decades to come... 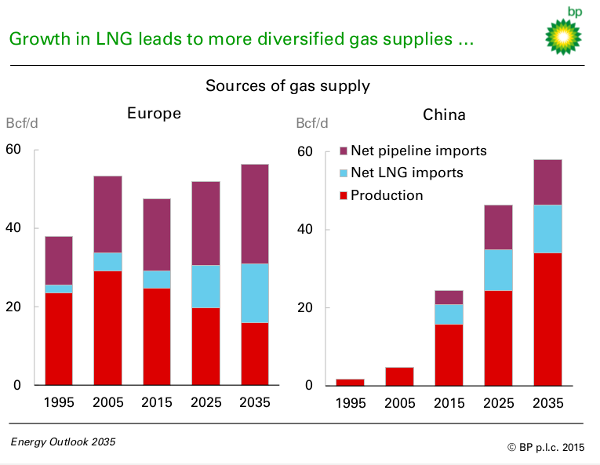 But trust me when I say the last thing China wants is a dependence on cheap North American gas.

That's why the Chinese are spending billions here in the U.S. for shale exposure. The end goal for them isn't to simply get rich off of U.S. energy resources (although that would help their supply-demand issue), but rather to use that technology on their own massive shale gas deposits.

You see, China is home to the world's largest shale gas resources, one that dwarfs even our own. But their struggle lies in their methods of extraction.

Thanks to complex geology the Chinese haven't figured out a way to extract these fossil fuels economically.

Which means they are years away from tapping their shale gas deposits — and they'll have a gigantic target painted on their backs until they do.

The bottom line: Potential U.S. and Canadian LNG exports will be one of the most explosive win-win scenarios for early buyers we've ever seen.

Will it happen? Absolutely. Again, Cheniere Energy already has their first shipment scheduled for early 2016!

And the excitement over Cheniere has rewarded investors handsomely over the last few years: 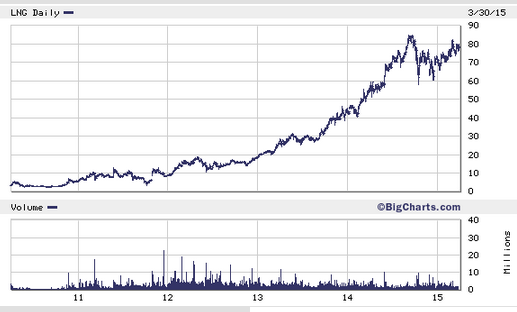 With Sabine Pass and the recent approval of Sempra Energy's (NYSE: SRE) Cameron LNG facility we can expect to see more export projects getting the stamp of approval.

Right now, there's more than a dozen LNG export projects waiting for the green light — and that's only in the lower 48 states.

So far, three export projects have approval and three more are under review by the Canadian government. Now they're trying to attract more interest by setting the tax bar as low as possible in the LNG industry.

Tack on a vigorous campaign to progress Canada's LNG projects in British Columbia, and the race is on...