In today's climate of political turmoil and economic hardship, it's encouraging to see deals going through that may help ease some of the stress of both problems.

In this case, I am referring to the Iran nuclear deal, which was solidified in July 2015.

The deal called for a culling of Iran's nuclear technology development, which the country claimed was only focused on nuclear energy production but which the world found was more likely aimed at creating nuclear weapons.

Regardless of its original intentions, Iran will be required to cut much of its development potential. In return, the U.S. and European powers that have held sanctions on the country for decades will drop most of their restrictions.

It seems fairly clear-cut: a trade of international safety for Iran's economic freedom. But there are a few more sides to the story than that.

For a clearer picture of the issue, let's look over the historical reasons for the sanctions and what effects they've had on Iran over the years...

History Leading to the Sanctions

The sanctions began in 1979 over the Iranian Revolution, when a total of 52 Americans were held hostage inside the U.S. embassy in Tehran.

This began a push from the U.S. to restrict Iran's ability to fund further terrorist and extremist events.

The U.S.'s first sanctions were against trade with Iran, with the intention of cutting of some of the country's oil, gas, and petroleum product investments.

In 1979, the U.S. began by freezing Iranian assets that it controlled, which amounted to about $12 billion. In 1984, the U.S. moved to prohibit all weapons sales to Iran.

In 1995, those sanctions were expanded to anyone doing business with Iran. That meant the U.S. would cut trades and impose fees on any country found to be supporting Iran's oil and gas businesses or selling any kind of weapons to the country.

This change also came in response to the fear of Iranian nuclear weapons development and was intended to keep countries from investing in Iran's energy sector and, by extension, its access to more nuclear materials.

While these sanctions have not been strictly upheld in recent years, they did deter most non-U.S. investment in Iran.

What's more, the UN and EU have their own set of sanctions against Iran's nuclear weapons development.

Beginning in 2006 and 2007 respectively, the international groups have passed their own resolutions banning the supply of nuclear materials to Iran, freezing Iran's assets in international banks, and placing embargoes on weapons of any kind in the country.

All three groups also have sanctions that restrict the movement of Iranian money through foreign banks, further restricting the country's ability to gain outside funding.

Below is a chart of the various sectors in Iran that have been sanctioned over the years and which countries still have those sanctions in place: 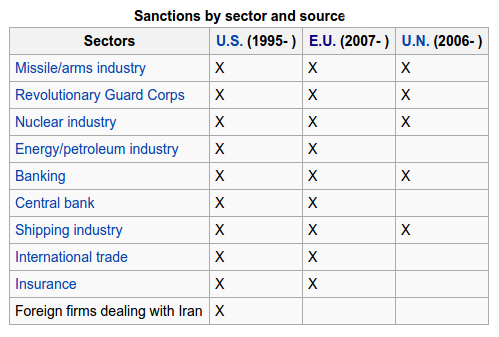 Japan and South Korea have also put sanctions in place that are similar in nature to those from the EU. Some of these extend to what kind of equipment Iran can use to enrich uranium for nuclear purposes, banning transactions between Iranian and international banks, and refusing to purchase, transport, or insure any Iranian oil and gas supplies.

As you can imagine, this many global trade restrictions has hurt Iran quite a bit. And it's not only the country's economy that has felt the sting...

Effects of the Sanctions

Once all three groups had their sanctions in place, Iran began seeing sudden drops in its value.

It's estimated that the loss of oil revenues was especially harsh. In 2012, Iran's list of oil customers dropped from 21 to six in just a matter of months.

The country reduced production from over 3 million barrels per day to about 2.5 million, and exports dropped to about 1.5 million. By 2015, Iran was only exporting about 700,000 barrels a day, with the rest of its production being used domestically.

It goes without saying that the country was highly vulnerable to the precipitous decent of oil prices that began late in 2014; minimal exports paired with record-low prices have left Iran's income extremely low.

Before 2012, oil exports accounted for about 50% of the Iranian government's revenue and 20% of the country's total GDP. And so, with the onset of the new sanctions, Iran's economy dropped about 10% in value.

The country's currency, the rial, also dropped, causing a rise of about 40% in inflation. Consumer goods became more expensive very quickly simply because the country relied so much on oil revenues.

And here began the non-economic effects: Due to the harsh situation the country found itself in, the competence of its leader at the time was brought into question.

And so, in June 2013, Hassan Rouhani was elected Iranian President. He replaced Mahmoud Ahmadinejad, who was a controversial figure accused of poor economic action and a lack of attention to human rights.

Though Rouhani has not yet been able to restore Iran's lost economy, he has made some major progress. In July 2015, he was able to negotiate peacefully with six world powers, and the Iran nuclear deal was finalized.

While the market is as of yet unsure of the effects the deal will have on the markets, the removal of sanctions can do nothing but good for Iran.

Effects of Lifting the Sanctions

As soon as the plan was announced, Iran started preparing for its re-entrance into the global marketplace.

One Bloomberg chart shows the trend of Iran's oil production in response to the sanctions — and later, the passing of the deal: 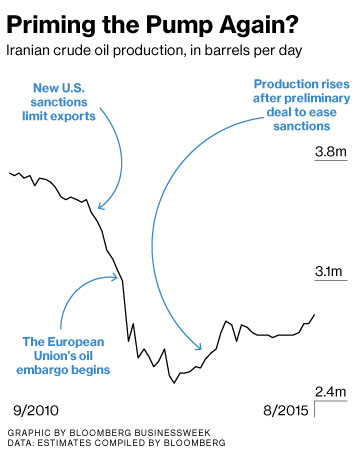 As the graphic shows, the country's production rose a bit right after the agreement to ease sanctions was made.

The country expects to start exporting an additional 500,000 barrels per day within weeks of the sanctions being lifted, doubling that to 1 million barrels per day months after.

But first, Iran has to conform to some restrictions as stated by the U.S., the UK, Russia, Germany, China, and France.

To have the bulk of its sanctions lifted, Iran must:

And this is in addition to ongoing restrictions on various weapons testing that the UN has enforced through its Security Council resolutions.

Already, this deal is being threatened, though. In December 2015, it was discovered that Iran had been testing ballistic missiles capable of carrying nuclear bombs.

This is a direct violation of the UN Security Council resolution 1989, which says, “Iran shall not undertake any activity related to ballistic missiles capable of delivering nuclear weapons, including launches using ballistic missile technology...”

The U.S. is already considering new sanctions against Iran for this transgression, though any such action would require approval from the rest of the groups involved in the Iran nuclear deal.

Iran has also challenged the decision that its missile met the requirements for carrying a nuclear bomb.

There has not yet been a concrete decision on how this action will affect the nuclear deal. The only thing that's assured now is stricter monitoring of Iranian nuclear developments if the deal still goes through as planned.

More than likely, the deal will remain valid. Earlier in the year, President Obama stated, “The truth is that Iran has always found a way to fund these [nuclear] efforts, and whatever benefit Iran may claim from sanctions relief pales in comparison to the danger it could pose with a nuclear weapon.”

So with a tentative relief of sanctions in place, where does that leave investors?

When the Iran nuclear deal was first announced to the public, the biggest reaction came from the oil markets. Because most of Iran's revenue was from oil before the worst of the sanctions came into play, oil will be the country's main concern when those sanctions are lifted.

Some expect Iran's contribution to the current oil glut to lower prices as much as 15%, even from their current lows.

That is not guaranteed, however. Iran must first find buyers for its oil, which may prove difficult. The oil that Iran produces is notoriously heavy and needs refining before it can be sold.

With decades of sanctions in place, Iran has had little funding for the oil refinement and transportation infrastructure it needs. It's been estimated that the investments for the oil and gas sector are about $20 billion per year below levels needed for strong growth.

What's more, the country's frozen assets will be available once more, freeing around $60 billion that is currently being held in foreign exchange reserves.

The country will need time to repair the damage done by the sanctions, and outside investments will be a huge boon.

For investors wanting a stake in this market re-entrance, the best place to look is large oil companies with the money to keep exploring in today's harsh oil environment.

One of the favorites in this category is ExxonMobil (NYSE: XOM). The company already has plenty of its own refining infrastructure.

So unlike ExxonMobil's stalled incursion into the Arctic oil fields, production in Iran will be more affordable.

Another company looking into opportunities in Iran is French Schlumberger (NYSE: SLB). The company exited Iran once U.S. sanctions were in place, though some of its affiliates continued to work minimally with the National Iranian Oil Company in recent years.

Its interest in the country was strong enough that one of its subsidiaries, Schlumberger Oilfield Holdings Ltd., paid a $232.7 million fine in March 2015 for continued business with Iran.

Schlumberger has already expressed interest in restarting full business operations in the country once sanctions are lifted. With a history of profits from the region as high as $418 million — a figure from the company's 2012 earnings — it's easy to see why.

Investments now in either of these historically strong and globally placed companies are likely to earn investors plenty when — or, indeed, if — the sanctions against Iran are lifted.