Special Report: Top 3 Renewable Investments to Profit From Without the Paris Agreement

So, it’s official: The U.S. is no longer part of the landmark Paris Agreement.

And even though President Trump said he’d negotiate a better deal, something that would be “more fair” to America in his eyes, the news seemed to signal doom and gloom for the American renewables industry.

That’s far from the reality of the situation, however.

Renewables are still growing at a clip, both inside and outside of the U.S.

Here’s the truth of the matter: There’s no need to panic!

We’ll take a look at why in just a moment — but first, let’s have a quick refresher on what exactly the Paris climate agreement was all about, anyway.

The agreement made in Paris at the end of 2015 was nothing short of absolutely amazing.

Across the world, 195 countries decided that it was high time to fix the planet and start with the growing problem of greenhouse gas emissions.

The goal, decided upon by representatives of each country, was to keep global warming from reaching more than 2 degrees Celsius above preindustrial levels, capping the warming at 1.5 degrees Celsius if possible.

This will be accomplished through the reduction of global fossil fuel consumption (which includes coal, oil, and natural gas) and through the use of renewable resources like solar and wind power.

In fact, why weren’t we doing this stuff already?

Well, consider the circumstances that the Paris Agreement was made under:

It was practically a no-brainer: A global initiative was proposed, and everyone jumped on board!

Why the sudden air of cooperation?

Well, it’s easy to say "yes" when it means you get credit for your support of clean energy without having any legal consequences should you not keep up your end of the bargain...

It could also be because renewables are so popular or because the rise of emissions everywhere goes unchecked.

Now, before the U.S. pulled out of the plan, two other countries exited the agreement: Syria and Nicaragua.

These countries both claimed that they made up little enough of the world’s emissions that their contributions weren't necessary.

The U.S., as the second-biggest emitter behind coal-heavy China, can’t use this excuse.

No one can deny that the U.S. is part of the problem and could do with some emissions reduction — whether you believe in global warming or not.

However, President Trump thinks there’s a better way to do it.

Rather than regulate and mandate emissions reduction left and right, it seems Trump has taken his “America first” approach to a new level in the energy industry.

He’s well-known for being pro-coal as it’s one of America’s oldest industries. It powered the industrial revolution and made the U.S. an energy superpower.

But I think even Trump realizes that it’s time to put money into something a little... greener.

It’s not just him, either. Many of his most trusted advisors are invested in companies with massive roles in the clean energy agenda, including but not limited to:

These and other major U.S. companies generate billions in renewable energy revenues, from producing parts for solar panels and wind turbines to providing analytics and development services to individuals and utilities alike!

Trump also recently suggested that the controversial Mexico border wall would be paid for through selling power from a massive solar farm along the same border.

Some would argue that this isn’t the best use of the technology we have at our disposal, but it is living proof that Trump is not out to kill renewables. His fight to save coal will also be unsuccessful in the end, which leaves cleaner energies as his only option.

And given how much the industry is growing, it’s not a bad option either!

As of right now, renewables at large (solar, wind, and hydropower) cover about 13% of U.S. energy generation — and climbing. 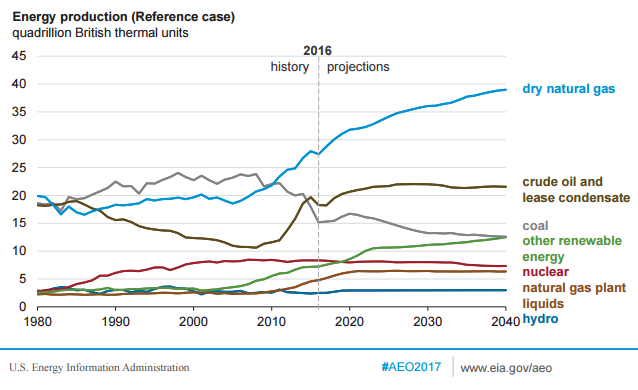 Estimates from the Energy Information Administration (EIA) call for renewable energy production to surpass nuclear in just a few years, then match declining coal production by 2040!

And here’s the best part: We were headed in this direction long before the meeting in Paris took place.

Moreover, the rest of the world will still be making progress along with the plan. And if the goal is still the same, there will have to be even more emissions cuts made in order to keep the warming below 2 degrees Celsius.

And that means that any progress the U.S. makes from here on out will be an added bonus, and will, in fact, bolster the global movement away from fossil fuels — even if we’re not officially part of the plan.

You see, the Paris Agreement was just a statement — a testament to just how seriously the world was considering this issue.

But as you can see from the progress we’ve already made in the industry, we don’t need it.

You don’t have to be a Trump supporter to get behind this movement. Renewables will take off with or without a global agreement, and now’s the time to start investing.

Coming in at All Angles

Remember those companies I mentioned above? Well, there are some good reasons for Trump and his advisors to be invested in them.

Of those listed above, the following are the top three investments for a market without the Paris Agreement:

General Electric Company is already a household name in home appliances and has quickly become a common pair for ENERGY STAR — the international standard for energy efficiency. You’ll see the two brands side by side in almost any store you go into.

But it’s much bigger than that.

GE has its own renewable energy branch, which invests an estimated $1 billion per year into the industry. The company offers hardware in the form of onshore and offshore wind turbines, and as of 2017, acquired LM Wind Power, a leading provider of wind turbine blades.

The company also provides hydropower turbines and generators. GE’s website claims that it has provided more than 25% of the world’s total hydropower production capacity, which includes both small- and large-scale installations.

GE also builds its own data analytics software, which allows companies to monitor and improve the efficiency and profitability of their wind and hydro installations. Better still, the company offers energy storage solutions for wind, solar, hydropower operations.

The company’s goal, as is everyone’s goal in the renewables space, is to create the most energy-efficient turbines at the most affordable prices. Scaling up of these technologies cannot happen until they become cheaper and more productive.

The stock is currently trading at a bargain below $30 and offers a quarterly dividend of $0.24 per share.

BlackRock is a multitrillion-dollar investment management company. Currently, it has around $1.1 billion invested in its New Energy Fund, which tracks the movement of companies in the renewable energy, alternative fuels, energy efficiency, and energy infrastructure industries.

In June of this year, BlackRock closed its acquisition of First Reserve's Energy Infrastructure Funds, another major private equity firm. This fund will be added to BlackRock’s existing infrastructure investment platform, which brings its total value up from $10 billion to $13.7 billion.

What’s important about this fund is its focus: pure energy infrastructure.

That may include things outside of renewables right now, but as the former head of the fund and current BlackRock Head of Energy and Power Infrastructure Mark Florian notes: “BlackRock is a best-in-class infrastructure solutions provider with a demonstrated ability to deliver on clients’ evolving needs.”

Those evolving needs will, without a doubt, include more and more renewable infrastructure that includes not only the energy-production tech but energy storage and grid services, as well.

You see, the U.S. energy grid is in dire need of an upgrade, especially as such intermittent power sources as wind and solar energies start to come online in more places. And don’t forget: The U.S. isn’t the only country making headway in the clean energy industry.

Over the past year, the stock has gained more than 15.5%. The company offers a growing quarterly dividend, which reached $2.50 in 2017.

This one is a riskier pick but with a lot of rewards on the way soon.

First and foremost, the company is well-known as the biggest name in electric vehicles (EVs), the world over. Its Roadster and Model S cars are credited with really getting the ball rolling on commercial EVs, and the upcoming Model 3 could either make or break this branch of the company.

Either way, the lithium revolution started with this fast-growing car company, and it’s not looking to pull back on that momentum anytime soon.

And more recently, Tesla has expanded its business far outside of the car industry.

It began with the Tesla Powerwall, a home battery system that could hold hours of charge to keep a household running without pulling electricity from the grid. Once upon a time, there was a deal to pair these systems with SolarCity panels, which would have given homeowners the option to go completely off the grid for portions of the day.

Last year, Tesla acquired SolarCity entirely and made it into a new branch called Tesla Energy.

Now, the company offers the Tesla Solar Roof, a series of panels embedded in industrial-strength glass shingles that look like regular roof tiles. These can still be paired with the Tesla Powerwall, and they offer all the style and green energy that regular panels lack.

Tesla also has a number of utility-scale installations that use both its solar tech and its energy storage tech. Larger Powerpack batteries currently power whole businesses, and in one case, an entire small island!

The fact that Tesla has a hand in so many separate (but similar) industries gives it a widely integrated feel — even though many of its businesses have yet to fully develop. As with most of the ventures of Tesla’s ubiquitous CEO, Elon Musk, there’s a lot at stake but also enough potential to put many of those fears to rest.