When was the last time you got excited about something with “nano” in the name?

Probably not recently. Once upon a time, putting “nano” on a product was all the rage. Devices of all kinds shrunk in size even while busting out higher capacities.

But that's just not the thing now.

Phones are growing back to the size of tablets, tablets are getting more accessories to become laptops...

“Nano” just isn't the catch of the day anymore.

But it should be.

And not just so your electronics actually fit in your pocket again.

Nanoscience, though not a hot topic on the market today, is still a massive part of the world's growing technological prowess.

It's probably already a huge part of your life, even if you haven't noticed.

And it should be a huge part of your investment portfolio if you're into making big money on small tech.

Sometimes, it's just obvious from the start what your life is meant for.

This is definitely the case with the man credited as the “Father of Nanotechnology,” one Mr. Richard Smalley.

Smalley was a professor of chemistry, physics, and astronomy at Rice University when he discovered a new carbon atom called buckminsterfullerene, or for something a bit easier to pronounce, buckyballs.

Buckyballs are spherical atoms of carbon connected in pentagons and hexagons, a bit like soccer balls. Here's a visual to wrap your mind around: 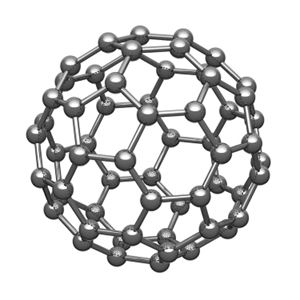 These particles have a wide variety of potential uses, including industrial lubricants, drug delivery, and even magnetizing non-magnetic metals.

Smalley also created a process called laser ablation to make carbon nanotubes, which are structured similarly to buckyballs, only they come out in long tubes rather than closed spheres.

Yet another nanomaterial made entirely of carbon is graphene: just a single carbon molecule thick, graphene is harder than most steels and has some interesting filtering qualities.

But of course carbon isn't the only nanomaterial being studied these days.

Some of the more notable materials today are cerium oxide, titanium dioxide, nano-silver, nano-platinum, and nano-iron.

Each has its own unique properties, which amounts to a long list of possible uses.

The U.S. National Nanotechnology Initiative has brought in billions of dollars in investments for nanotechnology research; its budget for 2017 alone was $1.4 billion.

Several individual industries are also researching and using various nanotechnologies. These include, but are not limited to, the medical, materials, and energy industries.

Those carbon nanotubes are already being used in a life-saving way: killing cancer cells.

The microscopic tubes can be placed directly into cancer cells, then heated with a non-invasive and otherwise innocuous near-infrared laser. This kills the cancer cells without hurting the healthy ones.

This treatment isn't open to the public yet — it's not entirely FDA approved. But it certainly got an impressive start.

In 2010, MIT created a nanoparticle that can carry medication straight to prostate cancer cells.

The medicine cells are bonded directly to the inside of a polymer particle, which is then tagged with a chemical that will drive it directly into the cancerous cell.

This process, while still in testing, has been shown to actually kill cancer cells better than regular treatments simply because the medicine can be so directly applied.

A little further out on the testing and commercialization time line are nanoparticles being used for genetic testing, blood purification, tissue repair, and even tissue engineering! 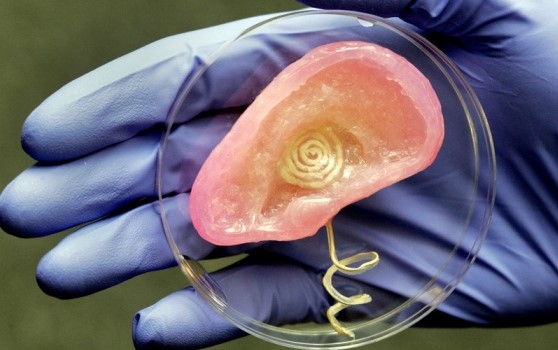 Of course, we're not betting on this sci-fi level technology just yet. Instead, we can focus on some nanomedicines that are more applicable today.

For instance, Avadel Pharmaceuticals plc (NASDAQ GM: AVDL) is working on a number of micro- and nanomedicine delivery systems, one of the most advanced applications in the field.

The company started with an idea called Micropump, which makes micro-particles of the medicine, coats them in a digestible polymer, then places between 5,000 and 10,000 of those coated particles into a pill.

The end goal is for the micro-particles to spread out and act as drug delivery systems in a more direct way, much like the nanoparticles MIT created.

And Avadel is still working on scaling down as well.

Medusa is Avadel's version of nanoparticle drug delivery. Instead of individual nanoparticles, however, Medusa uses a hydrogel that can be infused with particles of the medication, then injected into the body.

From there, the gel dissolves and releases the medication in controlled and extended doses. These doses can last up to seven days, meaning much less maintenance than with medicines that need to be taken once or more daily.

The technology is already going through clinical trials with positive results.

Meanwhile, the young company itself has recently reached an integral milestone: a positive cash flow. And it looks good to keep that up.

Early 2016 saw the acquisition of FSC Pediatrics, which brought Avadel four new commercialized products. Avadel also has two of its own commercial products on the market. Avadel used to be named Flamel Technologies, but as of January 1st of 2017 was renamed Avadel.

Since they're not a threat to your insides, industrial nanomaterials are much more prevalent than medical ones on the market.

Some examples of nanotechnology you may have in your home right now include “easy-to-clean” ceramic or glass dishes, scratch-resistant eyeglasses, water- and stain-resistant clothes, and sunscreen.

Yes, the zinc-oxide that keeps those pesky UV rays off your skin is nanotechnology.

Nanoparticles can also be used as strengthening agents in cement and steel and as fire-resistant coatings for just about anything.

Carbon nanotubes are an especially useful nanoparticle in this field. Their structure and strength makes them useful for strengthening other materials.

In longer strands, researchers are looking at the possibility of weaving the nanotubes together to create a super fabric. One experiment simply spun nanotube fibers together and found that the thread created was 17 times stronger than Kevlar.

I can think of quite a few uses for something that strong. But we're not quite there yet.

For an investment you can expect to see returns from a little sooner, 3M (NYSE: MMM) is a solid starting investment.

Let me explain a little about those last two.

The sun-control films are simply to be put over glass. They're not just a tint; rather, they use, as 3M states, “non-metalized nanotechnology” that lets natural light through but repels heat and infrared light, keeping the room on the other side of the glass cool.

This is done by adding nanoceramics to a polymer film, which is strong but thin and transparent.

As for the Crimplok Connector, this small, handheld device is made to quickly and safely connect or install fiber-optic wires by pulling them tightly together, crimping them in place, and even smoothing the glass fibers on a nano scale to keep them from fraying.

As fiber optics become more prevalent, products like this will become a must-have for connected homes and businesses. The advantage of 3M is that its products, nano and otherwise, are designed for easy use, which means a wider consumer base.

Plus, 3M will also be a nice addition to your portfolio. At the time of writing, the company's stock is up more than 9% since the beginning of 2018, and 3M has increased its quarterly dividend to $1.17. Annual increases are the norm for this company, if consistency is what you like in an investment.

The Father of Nanotechnology, Richard Smalley, was of the opinion that energy was the #1 problem humanity faced.

If the problem of reliable, sustainable energy was solved, he asserted, so too would be the problems of cleaning the environment, clean water and food for all, poverty, terrorism, and even war.

And while we can't speak to all of these, we can agree that reliable energy is essential to the future of humanity as we know it.

Smalley's buckyballs and carbon nanotubes both have several potential uses in the energy markets.

For instance, the two can be combined with polymers to create solar cells... in the form of paint.

You see, the carbon particles are highly conductive and can be used to gather light and heat from the sun. Their nano size means this can be done with just a thin layer of the material!

Something similar is being pitched in the UK. Two startups, Xefro and Inclusive Designs, are looking into inks made with graphene.

Similar to the use of nanoparticles in paint, Xefro's ink can be used anywhere in a home. But rather than absorbing heat, the highly conductive material is designed to give it off.

Inclusive Designs is going in the other direction, using graphene's ability to absorb infrared heat to create a cooling system that has no moving parts and uses no messy liquids.

These, of course, could both be major energy-saving applications for both home and industrial use.

Graphene also has another increasingly essential use in energy storage technologies.

Consider this: Graphene is one atom thick but extremely stable and strong and highly conductive of both heat and energy...

It's a perfect addition to today's lithium-ion batteries. It's being studied now as a possible battery anode material.

Currently, those anodes are made of graphite, which has a less conductive structure. And rather than replacing it with straight graphene, some research is being done to infuse silicon with carbon nanotubes or to layer graphene over it.

This combines the conductivity and energy capacity of silicon with the strength and longevity of these structured carbon nanoparticles.

Now, keep in mind that graphene and its carbon-based brothers aren't the only nanoparticles being used in the energy field. Gold, silver, silicon, titanium, and even nano-lithium are big in the energy industry.

But graphene has some of the most promising possibilities. And Graphene 3D Lab Inc. (TSX-V: GGG.V) is combining this versatile material with yet another technology hot topic that the world forgot: 3D printing.

Graphene 3D Lab, along with its subsidiary Graphene Laboratories Inc., creates advanced 3D printing composites. These graphene-infused polymers can be used to print physical items that are conductive and stronger than regular 3D printing materials.

It also means they can be used for any number of energy technologies.

In 2014, the company introduced its own 3D-printed battery technology, which, due to its properties and how it is printed, can be made in almost any shape and has the same voltage of a AA battery.

Here's a picture of the battery Graphene 3D Lab presented: 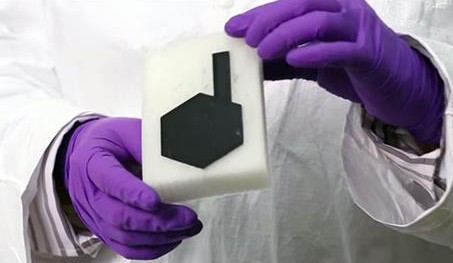 And really, there's not much chance this technology is going to get less valuable in the future.

Nanotech and 3D printing may come back in style very soon.

But in the meantime, these three stocks could be the start of your very own nano-portfolio... and your ticket to some giga-profits.