New energy technologies in this day and age need to be two things above all else: clean and efficient.

Of course, there’s a major disparity between those two things.

Our most efficient energies, such as coal and natural gas, aren’t clean enough to keep global carbon emissions from rising.

But our cleanest energies, solar and wind, aren’t yet efficient enough to replace our dirtier fuels.

As the world’s population increases by nearly 75 million people per year, we’ll need an energy source with a much bigger kick to cover our growing energy demands.

Is there really no energy source that’s both clean and efficient?

Hold On to Your Hazmat Suit

Despite the stigma against it, nuclear power has both the clean energy production and the high-energy capacity that the world needs.

Nuclear reactors have the highest capacity factor — the ratio between what a plant could produce ideally and what it actually produces when in use — of any energy-producing plant. 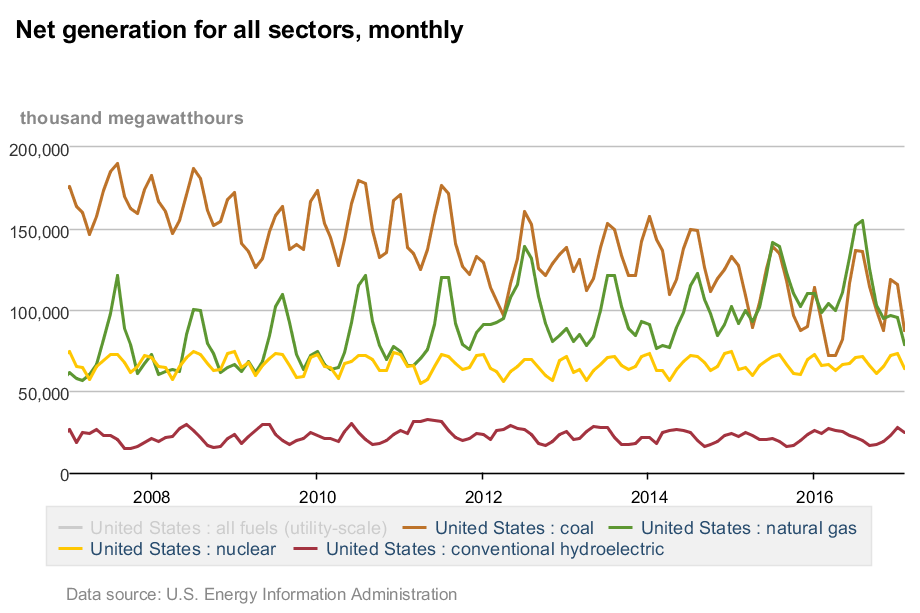 Month to month, you can see the change in the total electric generation. Solar and wind aren’t even on the map yet, while natural gas is quickly overtaking coal and is already far ahead of nuclear power.

Right now, low natural gas prices are taking it straight to the top of the U.S. energy mix anyway, and the high cost of construction in nuclear power plants is bringing non-fossil fuel back down.

But of these top three, we already know that nuclear is the most efficient.

Moreover, because the chemical reactions that produce nuclear energy don’t produce any emissions alongside them, nuclear is also the cleanest of the bunch.

If any of the world’s clean energy goals are to be met within our lifetime, we’ll need more nuclear energy.

I know, I know, the idea of more nuclear energy still conjures images of Fukushima and Chernobyl, right?

But what if I told you the investment that we’re looking at today will reduce the risk of a nuclear meltdown to almost zero?

Now, that’s worth taking a closer look at.

The Thing About Thorium

There are two huge things that are keeping nuclear energy from taking off in a big way: cost and safety.

Right now, the cost is a huge factor. The energy is comparatively cheap once the plant is up and running but building a nuclear plant can be prohibitively expensive.

Of course, if the safety issues were solved, that cost would drop quite a bit.

You see, the stigma against nuclear power is huge. When an oil spill or a gas leak happens, we patch up the pipe, clean up the area, and move on.

But when a nuclear power plant fails, we get more than a few years' worth of cleanup.

There haven’t been many accidents quite this big — and they certainly don’t happen as often as oil spills and gas leaks. But if it were possible to make nuclear power even safer, it could become a viable energy resource once again.

Here’s the kicker: It is, in fact, possible.

Right now, new reactors are in development that produce even more energy than the traditional nuclear power plant and are much safer to boot.

And it’s all thanks to a little thing called thorium.

Thorium is one of only two highly radioactive elements that can be found naturally in large quantities on Earth. The other is uranium, the traditional fuel for nuclear reactors.

The difference between the two comes down to chemical makeup.

Without getting too technical, uranium is simply more radioactive. Uranium atoms are “fissile,” which means they’re highly reactive without any extra catalysts. However, this also means that the reactions happen very quickly and leave behind a lot of waste.

Thorium, on the other hand, requires another catalyst to get the reactions going. This means that reactions can be shut down by removing the catalyst (usually a lesser form of uranium), which prevents a meltdown in case of an emergency.

Plus, thorium reactions leave behind hardly any unusable waste, all of which has a half-life just a fraction as long as uranium waste. And that makes the end results of thorium power production much more manageable.

According to a study done by Ralph Moir and Edward Teller at the Lawrence Livermore National Laboratory, just one ton of thorium could produce as much energy as 200 tons of uranium or 3.5 million tons of coal!

And there’s good news for thorium investors, as well: Monazite ore, from which thorium is mined, is also safer to handle, more abundant, and requires less costly refining than uranium-containing ores.

Thorium reactor designs by the Canada Deuterium Uranium (CANDU) have gone so far as to pair thorium with reprocessed uranium from traditional nuclear reactors.

Essentially, Canada has found a way to repurpose the world’s current stockpiles of nuclear waste for use in a process that not only uses much of that waste as fuel but also leaves it cleaner!

Another Canadian company, the startup Terrestrial Energy, is looking to improve upon this design even further by creating a molten salt thorium reactor.

The molten salt acts as a coolant and adheres to the liquid nuclear fuel inside the reactor. In theory, this means a molten salt reactor can never melt down since there is no way for the coolant to escape and leave the fuels to burn too hot. And that's exactly what escalated the Fukushima event from “malfunction” to “disaster” in a matter of hours.

But no matter what else is added, thorium will be the key to this transition.

Simply put, R&D is expensive — doubly so when tests must be done with the utmost care while handling radioactive elements.

But there's more than one country that seems to think it’s worth the risk.

China has been working with CANDU for the past few years on its nuclear industry development, with a focus on using advanced nuclear fuels (repurposed uranium and thorium) to bring more clean energy online.

Further studies are being done with thorium reactors in India, Indonesia, Norway, the U.S., and more.

However, the technology is still deep in the development phase. Even the partnership between China and Canada doesn’t expect its thorium reactors to be up and running until 2030 at the earliest.

Of course, that gives you a chance to get in on the ground floor of this high-potential market.

And for right now, there’s only one public company with its eye specifically on the growth of thorium.

This company’s stock took a dive along with interest in nuclear energy. As both a nuclear technology and nuclear energy consultant, Lightbridge has been losing out on the reduction of nuclear capacity over the past few years.

However, signs point to a much better 2017 for this company.

First, the company is one of the leading developers of nuclear reactor parts with improved efficiency and safety.

But given the recent climate that surrounds nuclear power, that’s not where it makes its money.

Lightbridge announced its earnings for the first quarter of 2017, and the entirety of its $0.20 per share net income came from its consulting fees.

All this means for us is that Lightbridge has a steady and building source of income while it continues the development of its modern nuclear reactors. And that, for the record, is being done in partnership with AREVA, an internationally integrated nuclear company.

In its latest update, Lightbridge also noted that it was in talks with “a leading U.S. nuclear utility” to be the first utility to use Lightbridge’s nuclear fuel in a commercial reactor.

As you can see from the stock’s movement, this news has gotten Lightbridge plenty of positive attention this year. Further exciting and profitable developments are sure to follow.