If you’re thinking of a possible building, you would be mistaken.

It can hold 20,124 TEU’s (twenty-foot Equivalent Units) of shipping containers.

To put that into perspective, that’s 1.06 billion pounds of cargo, which is longer than four football fields...

That’s about the size of seven supercenter Walmarts!

And this behemoth was stuck for over six days in one of the world’s most important and most traveled commerce liquid highways.

The name of that behemoth?

The MV Ever Given. 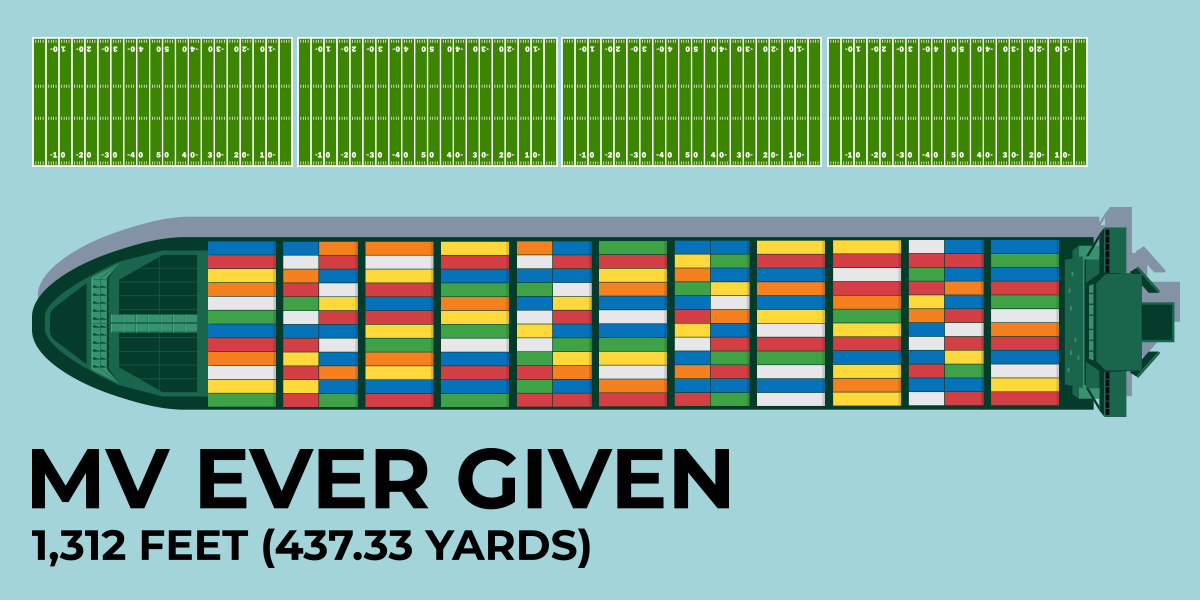 In 2020, almost 52 ships traveled through the Suez Canal a day. We can apply that math to determine how many other ships were stalled in their voyage, which equates to roughly 312 halted ships.

On those ships was an estimated $400 million in crude oil, with at least 6.3 million barrels delayed in their expeditions.

Keep in mind that the Suez Canal plays a minor role in global crude supply. Only about 4% of all seaborne oil traded today, or approximately 1.74 million barrels, passes through the canal every day.

Of course, there are multiple questions on everyone’s mind: What impact will this have on U.S. consumers? Will there even be a direct impact? How much more will I be paying for daily items?

Twelve percent of all global trade relies on the Suez Canal. Due to the disruption, it may take at least 60 days for the economic dust to settle.

In March 2021, oil output was expected to increase due to the recovery from ice storms and the overall cold weather.

Oil producers crossed their fingers as March came around, but little did they know that a blockage was going to set them back even further.

We know that the weaker the dollar, the cheaper oil gets in regard to other currencies, causing crude prices to go up. So when the S&P hits a record high, the NASDAQ is on a seven-week peak and the climate for gas inventories rises.

This called for a reevaluation of how to proceed with oil production post-crisis.

The week before, the Organization of Petroleum Exporting Countries (OPEC) and its allies agreed to a two-million-barrel daily production rate, which will be the rate for the next three months.

Russia believes that the global oil industry will continue experiencing the effects of the pandemic until 2024. However, Russia's oil output rate has surprisingly increased from March 2021 into early April.

Stephen Flynn, a professor of political science at Northeastern University, believes in an almost definite price increase on most imports:

It’s going to take a really long time, and they’re just beginning the process of sorting it out ... you’ve essentially created this traffic jam that doesn’t allow you just to reset and restart — you have to restack and reset the system and that’s something that’s going to take a lot of choreography.

The ripple effects on global capacity and equipment are significant and the blockage has already triggered a series of further disruptions and backlogs in global shipping that could take weeks, possibly months, to unravel.

So from an investor's perspective, what does that mean?

As global imports attempt to stabilize after such a drastic halt, monthly freight rates are forecasted to increase as high as 35% for the month of April 2021, compared to March 2021.

There were already instances of panic buying, an all-too-common phenomenon over the past year.

Nordic American Tankers (NYSE: NAT) won big time. Three days after the MV Ever Given got stuck, the company's share price increased about 19%.

This is why it’s important to watch West Texas Intermediate (WTI) prices, Brent prices, and OPEC+ decisions very closely. OPEC+ had a monthly report due out in mid-April 2021, which is we'll keep an eye out for.

Today, WTI prices are holding onto the $60-per-barrel threshold. Barring any dramatic weakness in prices, we’re going to see U.S. drillers slowly ramp up output — “slowly” being the keyword.

Yet U.S. crude output is just part of the fundamental equation that investors — us included — should pay close attention to.

We also need to know how OPEC+ and, more importantly, the Saudis decide to act moving forward. It’s clear that the Saudi crown is more than happy to keep crude prices around $60 per barrel.

And make no mistake, dear reader, any wild swings above $70 per barrel or below $50 per barrel would throw a wrench into the Saudis’ plans to balance this market.

What a miraculous thing demand can do.

Our oil consumption has been growing for decades. Then, a few weeks after our country's covid-19 lockdown, the U.S. oil demand crashed.

To this into perspective, during the week of March 13, 2020, the U.S. consumed 21.5 million barrels of petroleum products. Just one month later, our consumption levels plummeted roughly 35% to under 14 million barrels per day.

Those of you who saw that opportunity have made an absolute killing in the oil sector over the last eight months.

The American Petroleum Institute’s stockpiles rose by three million the week before the canal blockage.

Even the initial failed rescue attempt of the MV Ever Given affected oil costs.

Given the volatility of the oil market, Saudi Arabia and the United Arab Emirates have been vocal about their stance on changing the oil production flow for the next month.

Both have chosen not to make any changes to their production rate, understandably playing it safe.

OPEC+ and the Saudi royal family have agreed on monthly meetings to assess the market, giving signs to investors and consumers alike to remain diligent.

Rerouting from the Middle East to Rotterdam is usually done through the Suez, so a 15–⁠20-day voyage was planned for the awaiting ships to move around the blockage.

Compared to March 2021, monthly freight rates on the Suezmax routes are expected to increase up to 35% for April 2021.

There have already been freight rate increases a week after the crisis. The day before the blockage, the Suez Black Sea to Mediterranean freight rate ran $7/mt only for it to increase $3 to $10/mt on March 29.

The U.S.'s February 2021 cold blast also put a damper on its oil output. Consequently, the oil markets found themselves 100,000 barrels a day tighter.

When the pandemic hit the market and made oil prices sharply drop in March 2020, the number of active oil rigs was well over 800. A 67% fall in rig count followed the oil price drop, and the U.S has tried to regain its high rig count ever since.

Nicholas Caccohione, an analyst with consultancy RBN Energy, believes that 2021 looks “very good” for exploration and production companies. He says, "With the economy expected in recovery mode and travel poised to rebound, futures markets are indicating that oil and gas prices will remain strong throughout the rest of the year." 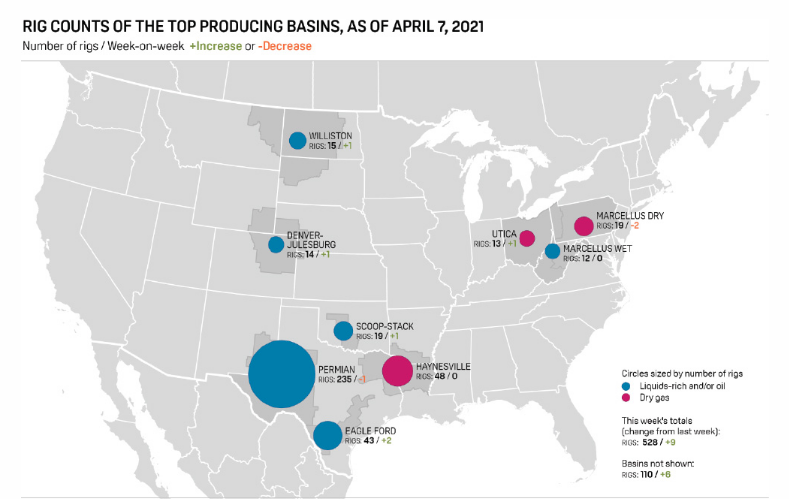 The oil market is showing signs of healing, even after setbacks like a massive ship being stuck in a major canal for almost a week.

OPEC+ is a little more optimistic in its outlook, believing that global demand will rise by 5.6 million barrels per day this year. However, I will also note that this is a downward revision from its previous estimates, thanks to renewed concerns over another round of lockdowns in Europe.

So what should we be watching?

As I mentioned, post-COVID-19 demand recovery is the true signal for future prices.

While the pandemic is not completely over and is still impacting markets, it is not unwise to get excited about the potential opportunity in the oil sector.

Progress in administering vaccines will allow more traveling on different scales, which is something oil producers have been waiting for.

If the market wants to see balanced increases in oil supply in the second half of 2021, the U.S. will be under pressure to speed things up, especially when huge global oil providers are planning to slow down.

Changed to: Higher oil prices could help U.S. oil producers get back into the groove of things — maybe not as quick as we'd like but at least it'd be an uptick in production.

Both Russia and Saudi Arabia are in favor of that move, and the two are powerhouse producers in the OPEC+ alliance.