Special Report: The One Stock to Buy For Massive Moly Profits

I've got a mouthful of a word for you today: molybdenum.

Or, you could just call it moly.

Moly is an element that you may or may not have heard of...

Its atomic number is 42, which may call to mind the answer to life, the universe, and everything...

But more realistically, it's just an extremely important part of us and our world.

And, as with some of our favorite investments, it's not an element that's big in the public eye.

It's got a variety of uses, and they're some of the most important uses an easily mispronounced element can have.

Let me explain exactly why you need to be aware of molybdenum...

You wouldn't believe the little — and I mean microscopic — ways that we use molybdenum every day.

For one thing, it's the element keeping your body in check.

Too little, and the sulfites in your food build up into uric acid, which can lead to anything from inflamed joints to total nervous system ruin.

In the other direction, too much molybdenum in your body can lead to a fatal copper deficiency.

So if the balance of this little-known element is out of whack in your body, in either direction, it could be curtains for you.

Luckily, it's not often a thing that people are deficient in, or really have a surplus of, so its use is more natural than you may think.

In fact, according to the Oregon State University's Linus Pauling Institute, molybdenum has been used to treat those with an illness called Wilson's disease, which causes buildups of copper in the body that can hurt your liver and brain.

But it's not just a biological balancing act...

The number-one use of molybdenum in our modern world is in strengthening metals.

The element has a high resistance to heat and pressure, as well as a highly useful level of conductivity.

Below, you can see the breakdown of molybdenum uses as found by SMR Research: 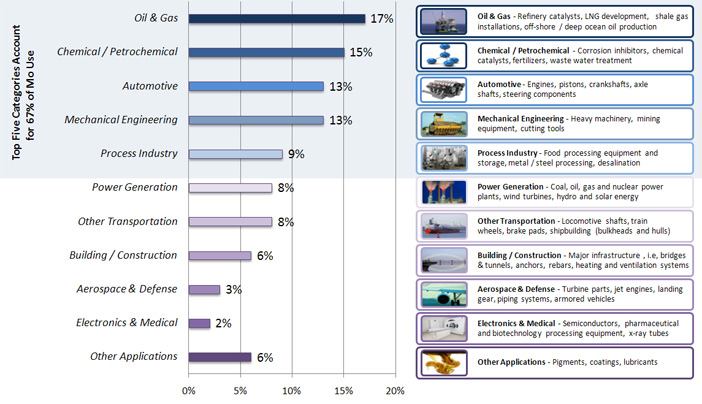 As you can see, the vast majority of the world's moly is used in metals across a variety of markets. The strengthening ability of molybdenum makes it useful for the building of any number of industrial and home products.

In stainless steels, which make up the infrastructure of many buildings and homes, molybdenum increases the metal's corrosion resistance.

This is a necessary enhancement for construction steels, which need to weather daily wear and tear for a long time. It's also the reason the element can be found in modern cars.

In alloy steels and iron, moly helps bump up a metal's hardiness, temperature strength, and weldability, as well as reduce how brittle the metal can become.

The International Molybdenum Association notes that these metals are used not only in cars, but also ships, airplanes, and rockets, plus mining and drilling for a number of resources.

Moly-metals are also useful in the processing of those resources. Later down the line, the same materials are strong enough to assist in energy generation and chemical processing.

As a commodity, the downturn in the oil and gas markets has reduced molybdenum's demand somewhat, but that only means a recovery in one will boost the other right back up!

Moly-chemicals are used in much the same ways, but on a smaller scale.

Molybdenum disulfide, for example, is used in industrial lubricants to reduce corrosion. Other moly-chem variations can be found in paint pigments, flame and smoke suppressants, and fertilizers.

Remember the bit about molybdenum in your body? Well, it's a big part of what makes your food grow in the first place.

Molybdenum is a necessity for agriculture, which is currently a multi-billion dollar market.

Moly is an important component of CIGS solar cells, which are thin, flexible cells with layers of copper, indium, gallium, and selenide over a molybdenum electrode.

Thus far, these kinds of solar cells haven't been the most popular. They account for a small percentage of the overall solar market, mostly due to the lack of commercial-scale production.

They're also a bit less efficient than traditional silicon crystal cells, but that's changing fast. In April of 2016, one German R&D center produced a cell with an efficiency of 22%, very near the world record for all solar panels of 22.8%.

The benefit of these cells will be seen in coming years. As solar cells show up in ever more versatile places, including home rooftops, building windows, cars, and even mobile devices, such a flexible but strong design like CIGS will be extremely valuable.

And that means molybdenum will be in high demand.

In some applications, it's even been found to be more conductive than silicon and graphene, both of which are also in the running for most important ingredient in the developing energy market.

Moly is also fighting graphene for another title: most useful water desalination tool.

You see, one of the major crises plaguing the world is a shortage of clean drinking water. It could be solved if there were an affordable way to make saltwater drinkable at scale...

And both graphene and molybdenum are candidates to make that happen. In November of 2015, University of Illinois researchers announced that they'd done virtual tests on both, and found that a membrane of molybdenum disulfide could filter water 70% better than the graphene.

There could be any number of uses for this amazing element in the future, in almost every aspect of our daily lives.

Let's talk for a minute about where the world will be getting its supply of this adaptable material.

IMOA provides this visual of global molybdenum reserves as recorded by the U.S. Geological Survey. Total reserves reached about 19 million metric tonnes in 2008: 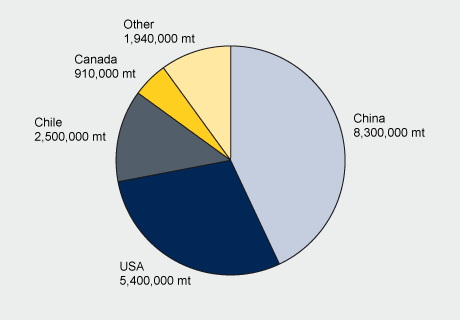 China has the largest reserves by far, and was the biggest producer of molybdenum in 2015 with 101,000 metric tonnes.

Moly can be the main resource of a mine with access to molybdenite resources, but can also be produced as a byproduct of copper or tungsten production.

So there are a plethora of companies with access to moly resources... but just a few that focus on it as a large part of their business.

For a company already deep into production, I would look at Freeport McMoRan (NYSE: FCX).

Right now is the time to get in on the moly market, before it comes back into the spotlight and the investment opportunities are gone!