Thank you so much for signing up to Energy & Capital. You've made an extremely wise decision, as the energy sector is just about the only one in our economy holding up right now. Below is your free bonus report, along with an important message at the end...

EU nations have their heads above the surface for the moment, but how long can they last? 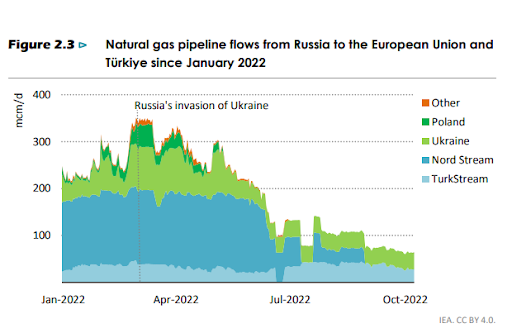 Just look at that dropoff. Many nations are operating with less than a third of their usual natural gas import levels.

One thing is for sure — none can hold out forever. Gas reserves were never meant to sustain the entire continent indefinitely.

But mark my words. Europe will be making some incredibly difficult energy decisions in the next 12 months.

European leaders might have successfully kicked the can down the road until next winter, but the Nord Stream pipeline is gone for good. Russian gas is unequivocally off the market.

And to be honest, I’m not even 100% confident that Russia itself will make it to the end of this fight in one piece.

To make matters worse, these proposed natural gas price caps are no match for the upcoming energy crunch. They're not the magic bullet that EU leaders seem to think they are.

It’s admirable that the EU is willing to sacrifice gas profits for the sake of the citizens, but it could backfire spectacularly.

All it takes is one country backing out for the entire arrangement to crumble. And support hasn’t exactly been enthusiastic from all parties.

For now, gas reserves are full to the brim. Some is leftover Nord Stream supply, while the rest comes from Europe’s new energy savior: the U.S.

But will it be enough?

The Answer Is Both Yes AND No…

Don’t get me wrong, the U.S. could theoretically pump out enough liquified natural gas (LNG) to keep Europe’s lights on for a long time.

But there's much more to the equation than that.

The names listed above are the earliest possible expansion projects. Until then, production will hold steady at 1.1 billion Bcf/d.

Producers won’t be able to scale up until at least 2024, which means Europe has at least one more winter to go.

The EU’s only hope is to buy LNG hand over fist from the U.S. — that, or carve out some kind of deal with Putin.

But like I said before, production levels are NOT the final word here.

Whether or not European countries will even be able to receive that LNG Is another story.

You see, regasification is not a simple process. LNG is cooled and pressurized to an ultra-cold liquid for shipping, so it must be brought back to room temperature and expanded back into a gas before it can be piped out and burned.

The facilities needed for this are so massive, they're most commonly pictured from above: 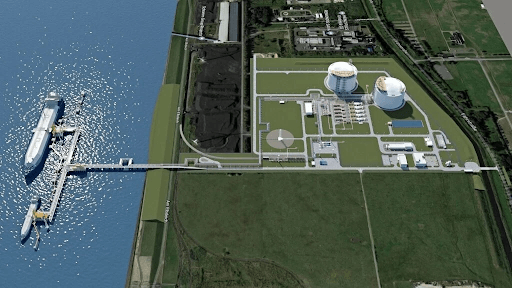 The cargo starts its delivery in a unique shipping vessel with specially designed LNG tanks. Each tanker can hold somewhere around 250,000 cubic feet.

In terms of natural gas, that’s about 5.5 billion cubic feet.

Since nearly 16 billion cubic feet of natural gas used to flow through the Nord Stream line EACH DAY, Europe is going to need a TON of these tankers.

Increasing regasification capacity is just as difficult as increasing export capacity. It can take years, which sort of undermines LNG’s reputation on the spot market.

For U.S. producers, you couldn't ask for a batter pricing situation. Pricing is almost guaranteed to be high, and orders are locked down for years in advance.

This captive market is as close to a bullish guarantee as you'll ever see in the energy market.

So, What Are We Waiting For? Time To Lock In A Trade

We’re staring down a situation that can go practically nowhere but up for U.S. LNG.

Domestic producers are booked solid for years to come, and at top-notch prices to boot.

Analysts are predicting demand will outpace supply by nearly 200 million tons by the end of the decade.

Right now, we have two main plays on our radar:

A battle-hardened LNG specialist with more facilities, pipelines, and expertise than anyone…

And a company that takes it where it needs to go — a floating pipeline with enough bandwidth to keep all of Europe warm and toasty through this winter and beyond.

The first company on that shortlist needs no introduction…

Not to be confused with its equally impressive parent company Cheniere Energy Partners (NYSE:CQP), Cheniere Energy, Inc is the largest exporter of LNG in the U.S.

It’s the obvious choice here — no other company has the same level of industry recognition as Cheniere.

This Texas-based gas giant has been working in both the Sabine Pass, LA and Corpus Christi, TX since 2005. The Sabine Pass currently boasts six liquefaction units, commonly called “trains”, each with a capacity of 5 million tons per annum (mtpa).

Cheniere’s Corpus Christi facilities have a total capacity of 115 mtpa, with 10 mtpa currently under construction.

Cheniere’s facilities condense around 4.7 billion cubic feet of natural gas into LNG each day. That’s about enough to send a fully loaded tanker anywhere in the world every 24 hours.

The U.S. LNG industry is riding a once-per-decade hot streak. Every domestic producer is looking to expand as quickly as possible.

Cheniere has already greenlit construction of an $8 billion, 15 mtpa expansion at its Corpus Christi location, expected to come online sometime in 2025.

A bit deeper under the hood, Cheniere is clearly benefiting from the surge in European exports. The company increased its business with the EU by 13.6 mtpa or 106% year-over-year. 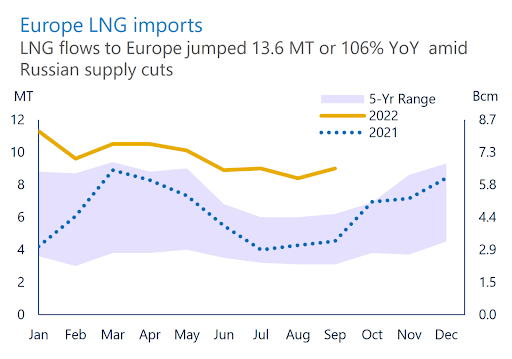 European buyers are willing to pay top dollar for these LNG shipments. Cheniere and the rest of its industry are running just under maximum capacity, and selling every ounce.

Now is the time to buy into Cheniere Energy, Inc. (NYSEAMERICAN: LNG).

Stock #2 Is A Globetrotting Network of Floating Energy Lifelines:

This is one of the fastest growing LNG operations on Earth. A study by Natural Gas Intelligence predicts that more than half of all new LNG exports in 2023 and 2024 will come from New Fortress Energy.

On land, New Fortress has a respectable production capacity of about 9.5 mtpa. It’s not the biggest on the block, but it’s also not where New Fortress really shines.

LNGCs and FSUs are critical, don’t get me wrong. But FSRUs are the real command center of the operation.

These massive vessels can be up to 290 meters long and 50 meters wide. If you flipped one vertically, it would be almost the same height as the Empire State Building.

Onboard, they have a full-fledged regasification plant and enough storage for 170,000 cubic meters of LNG. At the type of insane prices countries like France and Spain are reporting, a full tank could cost nearly $17 million.

But without the regasification systems, all that LNG is useless. Most countries taking these deliveries need more energy than their current infrastructure can provide.

You can park as many LNGCs and FSUs as you want. Without an FSRU, it’s as out of reach as the Nord Stream pipeline.

New Fortress has been sending these vessels to every European port it can find space in, Its production plants are humming at full capacity.

Oh, and did I mention that the company just posted a 3,000% dividend hike?

That’s right, New Fortress just pledged to return 40% of its annual profit to shareholders in the form of a $3.00 per share payout. The previous payment was only $0.10.

The company is on solid financial footing from just about every angle. It’s in one of the hottest markets on Earth with nowhere to go but up.

A perfect storm is triggering the biggest global crisis the world has ever seen.

Business Insider warns everyone to "get ready for blackouts from London to LA, as the global energy crisis sends energy prices skyrocketing."

Forbes sounds the alarm:
"Blackout: The Energy Crisis Looming Over Europe and the Rest of the World."

OilPrice.com reports, "One Billion People Are at Risk of Rolling Blackouts."

That’s why we urge you to prepare now for what’s coming this winter.

There are THREE simple moves  that Energy & Capital's Keith Kohl is recommending you make right now, these are CRUCIAL moves you need to protect your livelihood and your wealth.

Each passing day the situation is becoming more and more dire.  You owe it to yourself and your family to be prepared, click here to learn more.