When most people think “precious metals,” the first things that come to mind are gold and silver.

And there's a good reason for that: they're both extremely valuable. 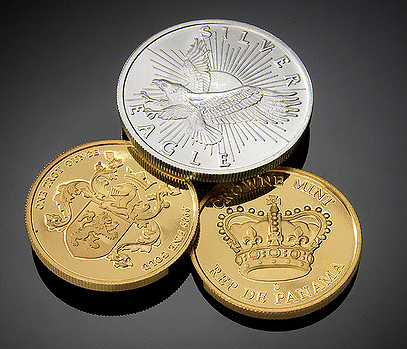 From the start, gold and silver have been used as currency, jewelry, and decoration. They've been a sign of wealth and power for as long as they've been above ground.

And now, in the modern world, they've retained that status. What's more, both have become important parts of today's electric and industrial markets.

Who could have guessed that one day the coin of the realm would be part of your cell phone?

But as two of the most valuable metals in the world, gold prices and silver prices are tracked relentlessly.

Those prices are also used for another metric: the gold-to-silver price ratio.

Before I explain how important that number can be to you, let's look back at why it was created in the first place...

When people began taking stock of everything in our world, it became immediately clear that some things were much rarer than others.

And this became an important metric in deciding exactly how valuable those things would be.

When the first numbers rolled in, it was believed that gold was about 16x rarer than silver, and so the price was about 16x higher. That is, every one ounce of gold was worth 16 ounces of silver.

When Rome ruled the world, that ratio was even smaller, set around 12x.

For some commodities, this pricing strategy still holds true. If there's more of it, it's cheaper; if there's less of it, it's more expensive.

But not so for our precious metals. You see, once they became safe havens for investors to hold onto in times of economic crisis, it didn't matter how much there actually was in the world.

All that mattered was the value placed on them by the markets at large.

You can see here how the ratio has changed in the last few hundred years: 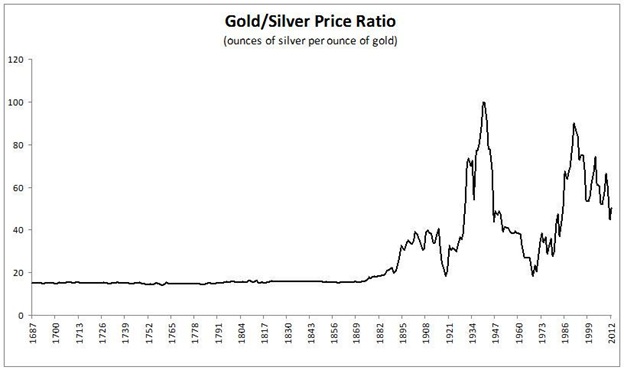 For a long time, that nearly 16x ratio held strong, with very little fluctuation. But over the years, after the late 1800s especially, that value changed dramatically.

You'll notice that the ratio never drops below about 15x; gold is never less valuable than silver.

Due to the intrinsic value the world has placed on it, it's simply the more precious of the two. And in the U.S., gold has been set by law at 15x more valuable than silver as of 1792.

Still, there have been some wild fluctuations over the years...

Why is gold even valuable?

In reality, there is no straightforward answer.

To even begin to get a grasp on the concept, we need to take a look at a bit of history.

We'll never know exactly what happened for sure, but we can assume that the first person to ever discover gold did not think of the metal as a monetary object.

Most likely, the first human to encounter gold saw it as a curiosity. It was yellow and shined like the sun. It could be molded into fantastic shapes.

Originally distinguished from other metals by its natural color, gold was eventually identified for its rarity.

Gold is still a very rare metal today. Estimates suggest that less than 6.5 billion ounces of refined gold exist above ground. Melted down into a single cube, all the gold in the world would measure about 25 yards on each side.

And that's it. That's all the gold in the world. There's less than one ounce of refined aboveground gold per person on Earth.

At some point in time, gold was also identified for its special physical properties. Gold is the most non-reactive of all metals — even with oxygen — and is benign in all environments.

The metal will not oxidize, corrode, or even tarnish.

For sure, there's nothing like it in the world. Nothing else has that color, that malleability, that resistance to tarnish and rust...

Silver, too, is malleable but durable. It's used in simple, everyday things like mirrors (for obvious reasons) and more complicated things like antibacterials.

One of its most attractive uses today is in solar panels as a paste that's essential to the collection of electrons and the completion of electrical circuits.

And to think they were once just considered something beautiful to have! But between beauty and solar panels, gold and silver became currency.

Following the Agricultural Revolution, more of the basic human conditions were met. The economy went from one of bartering to one of buying.

As people's needs became more refined, there was a need for a standard physical medium of exchange, common to all communities, that could be utilized in a broad trade market.

That's where metals like gold began to step in.

It didn't happen overnight, but gold eventually became a natural option to use as a store of labor — a standard physical medium of exchange due to its rarity, portability, ability to resist corrosion, and ease at which the metal can be identified by everyone.

Thus, gold became money. Silver became second in command for its own strength and longevity.

One of the world's earliest coins, minted in Lydia, Asia Minor (currently Turkey), around 600 B.C., was known as the Lydian Lion and looked like this:

Not quite as detailed as today's coins, but it served its purpose.

In reality, these Lydian Lions were made from a gold-silver alloy, which just goes to show how closely the two have been connected over the centuries.

But what decides exactly what these metals are worth today?

Well, it's important to note that, at least here in the U.S., our monetary system used to be tied directly to gold prices. If the dollar went up, gold went down, and vice versa.

We decoupled from gold in 1971, when President Nixon took the country off the gold standard. But, as a matter of habit, and what some think of as common sense, the trend is still pretty reliable.

Other factors include the original measurement of scarcity. Silver today is estimated to be around 19x more abundant than gold, but gold has the advantage of recoverability. It can be recycled and often is, simply because of its relative rarity.

Silver, on the other hand, has more industrial uses than gold, and is thus affected a little more harshly by outside market forces. Its price is far more volatile.

And that's why investors keep such a close eye on the going rate. Any big event — political, economical, or even social — could cause an extreme price movement, and they want to be ready.

The unexpected Brexit, the oil glut, and the uncertainty in China all weigh heavily on the price of our precious metals. Both are up, but how far they'll go or when those gains will stop is anyone's guess.

When in a crisis, investors rush to both metals for safety. Even with the market mayhem, they're still generally a safe bet.

The gold-to-silver ratio is what investors use to gauge which one of the two most popular precious metals is more worth investment at the time.

A lower ratio may mean that gold is down, trading at a bargain, and good to buy into now before it rockets back up again. A high ratio could indicate the same thing for silver.

This metric isn't always perfect, but then we all know that no single number can guarantee you a win. But comparing silver to gold has, for a long time, been a good way to gauge which is the better bet.

To get in on both — or either — of these precious metals, it's pretty simple to find a fund that covers them.

The best choices are those that deal in the physical bullion rather than individual stocks; that way you get all the gains of buying the commodity yourself without the risk of not being able to liquidate it when you need to.

Both are ETFs that buy and sell gold and silver and aim to deliver shareholders the same performance as the precious metals themselves.

And this is where that ratio will come in handy. Which ETF will you chose? How much to buy? It all depends on what the ratio says will bring in greater gains: silver or gold?