“We're talking terawatt scale. The goal is complete transformation of the entire energy infrastructure of the world.” — Elon Musk, Bloomberg (May 1, 2015).

Energy for the whole world?

It's not as far-fetched as it seems.

That's an easy connection to make.

Whoa, where are we going with this?

From the battery in your cell phone, the glass in your windows, the energy that runs through your home, and even the air that flows through spaceships: Lithium is an essential ingredient of life.

The world we live in thrives on energy, and our need for it will only increase in the future.

Just think of all the hybrid and electric cars that you see on the road today — rechargeable lithium-ion batteries are what keep them running.

And these new tech conveniences are not only here to stay, they’ve also become vital for everyday life.

Lithium keeps life at home that much more comfortable, too.

The glass in your windows has ties to lithium. It helps glassmakers save energy when they melt it down and mix in other materials to make the glass stronger and with fewer impurities.

The same goes for other metals like aluminum and copper.

And it all comes back to energy.

Without it, we should just forget about every single one of those products.

And no matter what you're using, there’s a good chance that lithium is fueling it…

Do I Have the Energy for This?

I want you to take a quick look at how the U.S. uses various sources of energy: 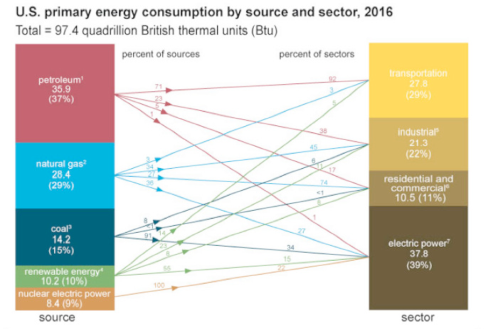 In 2016, the U.S. used five primary sources to generate electricity.

According to the Energy Information Administration (EIA): coal accounted for 30% of generation, natural gas made up 33%, nuclear power made up nearly 20%, renewables (including hydropower, wind, biomass, solar, and geothermal) was around 14.9%.

Now, if you’re scratching your head and are wondering why this is important to the coming lithium revolution, there’s just one sector to look at…

Take another glance at the chart above and you’ll see that petroleum powers 92% of the U.S. transportation sector.

Last year, approximately 276.1 million vehicles were registered in the U.S.

Make no mistake, dear reader: This is the transition that will take the lithium revolution to the next level.

Just imagine the amount of electricity needed for a full EV takeover.

And it’s becoming increasingly clear that the world’s largest automakers are just beginning to make the switch to EVs.

Granted, this is also not to mention that the Tesla Gigafactory 1 is officially churning out its affordable Model 3 cars and is projected to be pumping out 500,000 EVs per year within the next few years.

Here’s a quick list of just some of the major announcements:

In total, the world’s automakers are investing a whopping $90 billion in both battery technology and electric car development.

In other words, the world is going all-in on EVs, and it will drive lithium demand — and prices — through the roof!

But here’s the really interesting part…

It’s not just companies that are taking the lead on this push for all-electric vehicles.

China, the largest car exporter in the world, is planning to ban the sale of petroleum and diesel cars in the future.

Both France and the UK are also banning these traditional vehicles by 2040.

In the Netherlands, all cars are expected to be emission-free by 2030.

And in Norway, sales of gasoline and diesel cars will be banned by 2025.

Think about the amount of lithium-ion batteries that would be needed to replace the 1 billion motor vehicles on the road in the world today.

Below, you’ll see firsthand that the overwhelming amount of lithium supply in the future will be directed toward the battery sector: 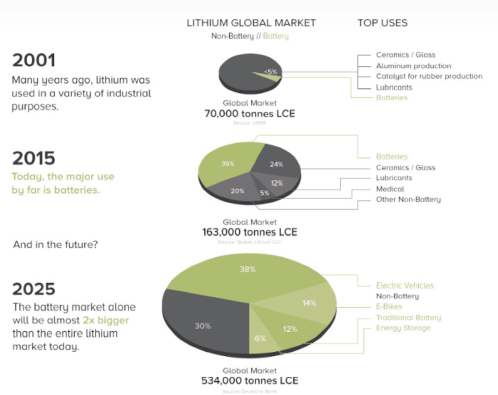 That, of course, begs another question: Will we have enough lithium for this revolution?

Where Is This Coming From?

First, you have to understand that lithium doesn’t occur in nature on its own.

It's abundant on Earth but only as a part of other mineral mixtures. Saltwater brines, rocks, and clays all have lithium in them. 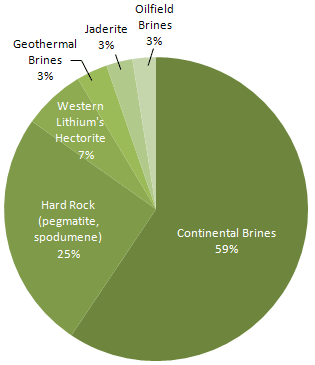 This graph shows the sources of lithium by percentages.

As you can see, the largest portion of lithium comes from continental brines.

Despite this, Australia (via hard-rock mining operations) was the biggest producer of this energy metal in 2016, producing approximately 14,300 tons of lithium.

The second-biggest producer of lithium in 2015, Chile, came close with 12,900 tons reported.

However, the important thing to remember when it comes to lithium supply is that half of the world’s lithium resources can be found in the “Lithium Triangle.”

The Lithium Triangle is located in Chile, Argentina, and Bolivia. In fact, more than one-third of the world’s production of lithium carbonate comes from this area.

In the U.S., there’s only a single operating lithium mine, which is located in Nevada.

Believe me, there’s a reason why Elon Musk chose to put his first gigafactory there!

The challenge in Nevada, however, will be developing efficient methods to extract lithium from the growing list of projects taking shape…

What Can I Do With This?

If you're planning to invest for the future, Tesla is the obvious place to start. But don’t invest in the company directly...

Tesla's Gigafactory 1 opened in 2016 and spurred a huge reaction in the lithium battery world. Tesla also has Gigafactory 2 in Buffalo, and Gigafactories 3 and presumably 4 being constructed in China and Europe, respectfully.

Now that it's operational, the race is on.

More importantly, there are several companies that have been making rechargeable batteries for new tech devices (think smartphones and laptops), and EV-hybrid cars for years.

The Gigafactory 1, however, is raising the bar. And like I just mentioned above, virtually all major automakers are quickly expanding their fleets of electric vehicles.

And that's not to mention the tech companies and transportation startups that have jumped on board!

Again, it brings up a serious question regarding supply…

Tesla's Gigafactory 1 began limited production of Powerwalls and Powerpacks in Q1 2016 and power cells in 2017. Nevada Governor Brian Sandoval estimates that Gigafactory 1 will bring $100 billion to the Silver State over the next twenty years.

However, rather than invest in Tesla and its history of slow production and missed deadlines, investors may find more value in its partners.

Panasonic, the company that's been providing major electronics to the world for years, has already invested. This battery company has business all over the world and not only has a stake in Gigafactory 1 but also the second one still being planned for construction in China.

Remember, lithium is not rare.

However, the supply chain is held tightly.

And to make matters worse, this lithium oligarchy also sets its own prices!

But even though supply is tightly controlled, we have to remember that demand will skyrocket.

And some of the smaller lithium producers (there are only a few) stand to rake in a fortune in future revenues as they bring more supply to the fold.

Tesla's current Model 3 preorders alone imply that it still won't be able to keep up with demand. And that isn't the only thing that the company produces batteries for. In early 2017, Tesla partnered with Southern California Edison to bring on line an 80 megawatt-hour (MWh) Powerpack system — just one of many utility-scale systems being installed around the world.

All of this means high demand that will deplete a huge supply of lithium. And Tesla is the springboard for getting this investment on the road and into our homes.

As valuable and useful as lithium is now, it’ll only get bigger as demand takes off.