Special Report: The Cash in Low E-Glass: How Everyday Investors are Reaping a Windfall Through the Looking Glass!

Do you know how many different types of glass there are in the world?

Countless variations of just the colorless kind are used in homes, businesses, and devices all over the world.

Yet what you may not know is that the varied uses for glass are enhanced by boron and borate minerals, which harden and strengthen the atomic structures, and are utilized to make everything from cookware to solar panels more versatile and long-lasting.

How many types of these glasses do you think you come in contact with every day? Let's find out.

Chances are you've at least heard of the brand Pyrex, owned by Corning Incorporated (NYSE: GLW).

Though the company produces materials for ceramics, optical fibers, and cable hardware, its most famous products are its sturdy household cookware.

In 2010, the U.S. Consumer Product Safety Commission began investigating complaints about American Pyrex products shattering in high heat; this was determined to be the result of using soda-lime rather than borosilicate, and indicates a likely switch back if the price of boron minerals becomes more affordable.

Erring on the side of safety, almost all modern laboratory glassware is still made with borosilicate glass, not only for its heat resistance but for its visual clarity.

Here's a fun fact: the same Pyrex brand glass is also used in telescopes. How much farther from the kitchen could you get?

The same properties that make the borosilicate glass resistant to heat — the ability to retain heat and not expand — make the glass a viable option for large telescope mirrors. The first of this kind was made in 1935 for the California Institute of Technology's 200-inch telescope at Palomar Observatory.

But we were talking about glass you use every day. Here are a few other types...

An Alphabet of Glasses

Among the borosilicate glass spectrum there are such things as E-glass, D-glass, C-glass, S-glass, and T-glass. We will not be going over them in order of the alphabet, but rather in order of their use.

E-glass is by far the most widely used version of borosilicate glass. It is actually an alumino-borosilicate, which makes it both strong and flexible.

The name was based on its original use in electronics, though now it is more often used to reinforce plastics. Occasionally, it is still used as a protective cover for touch-screen devices.

This range of flexibility means the glass could also be made into smaller-than-hair fibers, which can be used to make products with... get this: Fiberglass.

I'm sure you use things made of fiberglass on a regular basis. Your house is kept at an optimum temperature by fiberglass insulation, parts of your car are likely fiberglass, and even the sidewalks in your town may be reinforced by thin fiber mats set into the asphalt.

And that's just the beginning.

D-glass is named for its low dielectric constant, or its resistance to electric currents. This is useful for electrical insulation, as the borosilicate fibers will not break down with extensive exposure to electricity.

C-glass is so named due to its chemical resistance. T-glass has high thermal insulation. And S-glass is stiff glass with high tensile strength.

Each of these can have borosilicate fibers to reinforce them in these ways, much like the laboratory cookware I mentioned before. Glass used for heating and mixing chemicals must be able to withstand major heat and not react to any odd chemical mixtures.

I've strayed into science again, but let's stay there for just another minute...

Yes, I'm sure. But understand, that doesn't mean solar has nothing to do with it.

There is another type of glass that is being developed as we speak: low-e glass. It is like the above examples because it is an insulator, but the name comes from its low emissivity.

Now, this does not mean the glass has an emissions level — no carbon footprint here. Emissivity refers to how much light and heat the glass absorbs and radiates. Low-e glass is reflective, and so infrared and ultraviolet light are bounced off the surface while visible light is allowed through.

This reflective ability also keeps heat on one side of the glass. In winter, the heat in your home will try to escape to the cold outside. Low-e glass will reflect the heat back into the house rather than letting it escape. In summer, it reflects the heat back out rather than radiating it inside.

What does this have to do with solar? The U.S.'s major boron producer, Rio Tinto Borax (NYSE: RIO), and a subsidiary company 20 Mule Team Borax, cite the use of borosilicate glass in photovoltaic solar panels and in evacuated solar collector tubes for water and home heating.

The glass in solar panels must be able to withstand major heat — they are out in the sunlight all day, after all. And impact-resistance for industrial glass is a must.

The solar collector tubes are cylindrical borosilicate containers full of water which either produce heat from direct sunlight on the water, or from sunlight reflected from parabolic mirrors. These are especially viable in hot countries with solar farms in remote areas.

Low-e glass will surely be a valuable material not only for energy generation, but for energy storage. As the push for clean energy strengthens, household insulation will help save the huge amounts of energy expended on temperature control every year.

That may sound like a stretch, but have a look at this visual of residential energy use from the Energy Information Administration (EIA): 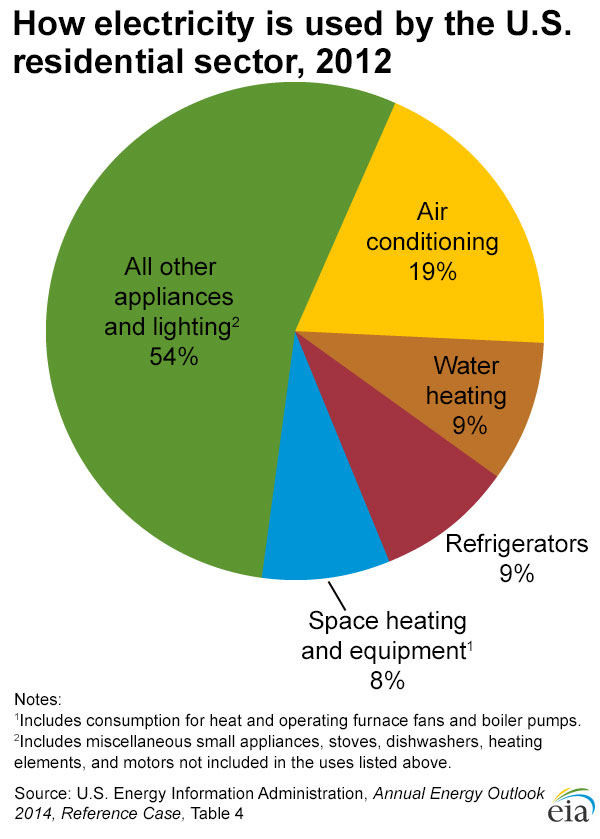 Notice that air conditioning and space heating take up 27%, more than one quarter of all residential energy use in 2012. Air conditioning has the single largest electricity consumption; only the onset of rechargeable devices and the growth of electronic appliances put together can match it.

However, using the boron-containing glass, that number could be even smaller. That could mean major energy savings for homes and businesses alike.

Another 9% of energy use comes from refrigerators alone. They, too, need strong insulation to keep your food fresh. Boron-enhanced ceramics cover most of these appliances, another energy-saving measure.

Saving energy means saving money. And as I'm sure you know, saving money is important right now. Which means anything that can do both will be popular with the public.

The countries with the two largest GDPs, China and the U.S., are also the biggest consumers of borate minerals and the largest producers of textile and insulation-grade boron materials. The more affluent the country, the more spending that happens. And these boron materials and products are in high demand almost everywhere.

With so many uses, just in glass no less, boron and its mineral compounds will stay valuable on the market and could take off as demand for derivative products grows.