The Beatles had a fifth member...

The ancient Greeks even had a fifth element...

And even though Rhodium isn't technically considered a “precious” metal...

That's because not only is rhodium one of the rarest metals on Earth — over 100 times rarer than gold — but it's also a key component to the multitrillion-dollar automotive industry.

Rhodium — along with platinum, palladium, ruthenium, iridium, and osmium — is part of a group of elements referred to as the platinum-group metals (PGMs), which all have similar physical and chemical properties.

Over 80% of the world's annual rhodium supplies go into autocatalyst manufacturing. And three-way catalysts for gasoline emissions control account for more than 95% of total autocatalyst usage of rhodium. So, the demand in this segment is critical for the metal's demand.

That’s because, despite the slip, demand is climbing once again. Global light-duty automobile demand is expected to double by 2019 and nearly triple by 2024. 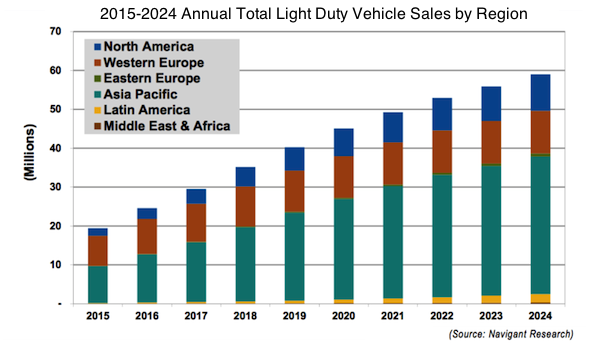 And far from stealing rhodium’s thunder, newly lowered emissions standards all over the world have boosted the demand for this metal. Its use as a cleaning agent in traditional gasoline cars is only getting more important as ideals for clean energy spread.

That could be a problem for end users because rhodium production is extremely limited.

Only about 1 million t. oz. of rhodium are mined each year. Compare that to the 6.6 million oz. of gold and the 35.2 million oz. of silver that were mined last year.

Rhodium is actually the second rarest element in Earth's crust, occurring at only about 0.0002 ppm.

In fact, there are fewer than 10 significant rhodium-producing mines in the world. And most are located in one single country: South Africa.

South Africa supplies about 80% of the world's rhodium. And this concentration of rhodium-mining operations often leads to extreme price volatility.

In 2008, supply shortfalls from South Africa caused the price of rhodium to spike to over $10,000 per oz.

The economic slowdown of that year eventually caught up with rhodium, which caused prices to collapse. 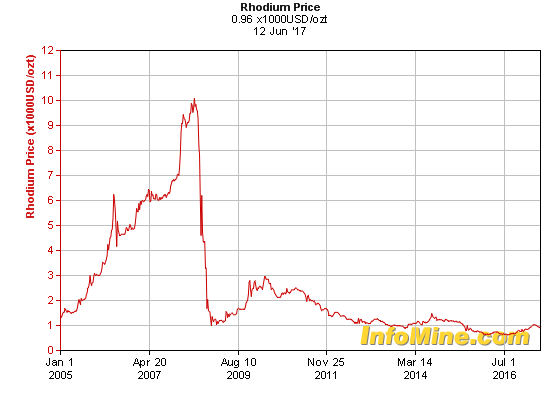 Lower energy prices led to a bit of an oversupply in the market starting in 2014. And in 2015, the rhodium market saw its first supply surplus in several years. Since then, the price of rhodium has remained under $900 per oz.

Rhodium’s price continued to slide throughout the first half of 2016 but began to rise again in October. As of the publication of this report, the metal is selling for around $950 with projections putting it back above $1,000 before the end of the year. 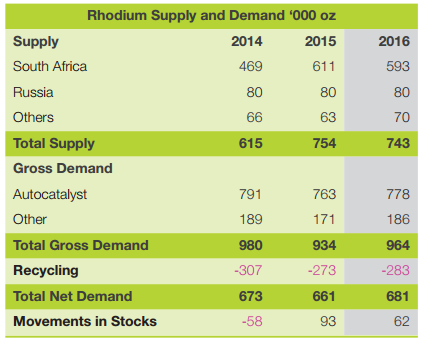 Not even a decade ago, there was virtually no way to invest in rhodium. There weren't futures, ETFs, or even physical rhodium aside from a handful of companies that sold rhodium “sponge.”

In 2009, the Cohen Mint was the first to produce .999 fine investment-grade rhodium in the form of rhodium bullion rounds and bars.

The following year, the Baird Mint introduced a line of physical rhodium bars — which are available in 1- and 5-oz. bars, as well as fractional sizes one-tenth, one-quarter, and one-half oz.

As far as rhodium stocks, there is no way to get pure exposure to the metal.

Rhodium is so rare that there are simply no primary rhodium mines. The companies that mine rhodium only produce it as a by-product, and they all have different primary interests:

That's because although the upside potential is astronomical — with prices once at $10,000 per oz. — there are serious issues with investing in the metal itself.

There's no good equity exposure to rhodium. The companies that produce the metal are all major mining conglomerates — all of which have various primary interests that don't include rhodium mining.

Aside from the outrageously high premiums, liquidity is going to be an issue with physical rhodium. An investment-size holding will be extremely difficult to sell.

Your local bullion dealer probably won't want to buy your rhodium when it comes time to divest. Owning the physical metal is probably best just as a curiosity.

The Rhodium ETF would be the best choice for investors who want to leverage rising rhodium prices. However, it only trades on the London Stock Exchange, which might make it difficult for some to buy and sell.

However, there are easier ways to cash in on this rare precious metal. Instead of looking for rhodium investments, I would simply recommend that investors look to either of its source metals — platinum or palladium — which are:

Although the long-term outlook for rhodium prices looks robust — and supply shortages could easily send prices into the stratosphere again — I think there are much better metals for investors.

The spot prices of rhodium are set by Johnson Matthey twice daily for the American market. You can see the latest prices and price histories here.

Be sure to stay tuned to Energy and Capital for more precious metal investing,