Ever since then-President Barack Obama said he would put coal companies out of business in 2008, Wall Street has ignored coal producing. And that's made it the most undervalued sector in the market.

It's true that coal production did go down for four years. But ever since President Donald Trump was elected, that's turned around. Don't get me wrong, the U.S. isn't burning more coal. It's exporting it both to China to replace low-quality coal and to Germany, which shut down its nuclear power plants: 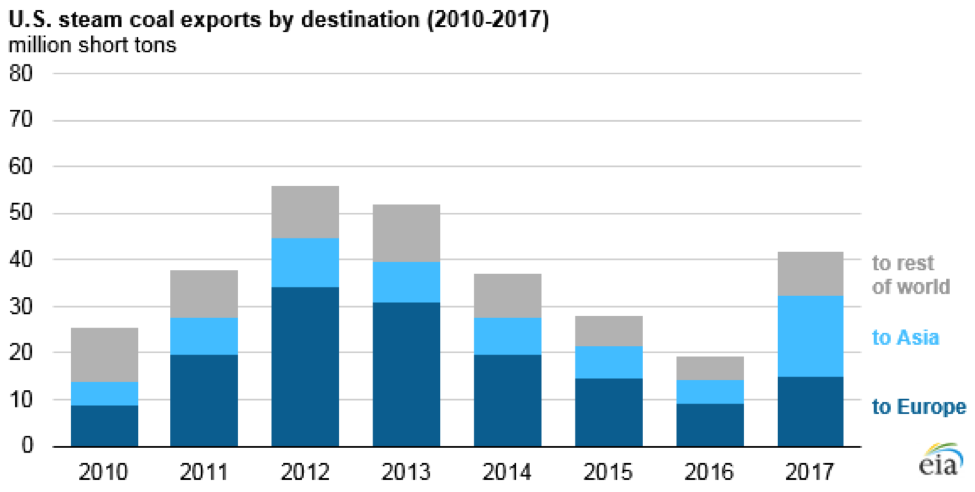 We Have Lots of Coal

There will soon be more than 8 billion people on this planet. And they all want electricity. The lowest-cost producer of power is coal, and we have lots of it.

One professional organization estimates that there are 1.004 trillion tonnes of coal reserves left. That's equivalent to 130 years of global coal output. The U.S. has been called the "Saudi Arabia of Coal" and has enough to last 500 years.

Coal is the major fuel used for generating electricity worldwide. As you can see, South Africa is most dependent on coal to keep the lights on:

Coal is cheap and plentiful. Coal plants are also low-cost and easy to build. So, consumption growth is driven by the low cost of building and running coal-fired power plants and the strong demand from emerging market countries like China and India for electricity. Their growing infrastructures and populations demand electricity.

There are 1.3 billion people currently without electric power in the world. And they want refrigerators and TVs just like everyone else.

There's a true growth trend in coal right now. It's one of the most undervalued commodities in the world. But it won't be that way for long. And there's a solid case to be made that coal will be one of the best-performing assets over the next 10 years.

Know Your Types: Thermal and Metallurgical

Coal formation began in the Carboniferous Period, known as the first coal age, which occurred between 360 million and 290 million years ago. The buildup of silt and other sediments, combined with movements in the Earth's crust, buried swamps and peat bogs under the earth. With burial, the plant material was subjected to high temperatures and pressures. This caused physical and chemical changes in the vegetation, which transformed it into peat and then coal.

Dry, hard coal is worth more than wetter, less dense coal because it burns hotter and cleaner.

The type of coal is determined by...

The degree of change undergone by coal as it matures from peat to anthracite is known as coalification. Coalification has an important bearing on coal's physical and chemical properties and is referred to as the "rank" of the coal.

Ranking is determined by the degree of transformation of the original plant material to carbon. The ranks of coals, from those with the least carbon to those with the most carbon, are lignite, subbituminous, bituminous, and anthracite.

Initially, the peat is converted into lignite, otherwise known as brown coal or soft coal. This is the type most common in China.

Over many more millions of years, the continuing effects of temperature and pressure produce further changes in the lignite. This progressively increases its organic maturity and transforms it into the range known as subbituminous coals.

Further chemical and physical changes occur until these coals became harder and blacker, which forms the bituminous or hard coals. Under the right conditions, the progressive increase in organic maturity can continue and finally form anthracite — the most valuable type of coal, which is used in the production of iron. This type of coal is abundant in the U.S.

When investing in coal, the quality of the coal is more important than the quantity.

Since 1983, China has been the world's top producer of coal. But that doesn't mean it has the most. It just means that it has the highest demand. Production has less to do with reserves than it does with demand.

By far, the U.S. has the world's largest reserves of coal. Some estimate that the U.S. has enough coal to last 500 years.

For example, Indonesia, Australia, and the U.S. export to Asia; South Africa and Kazakhstan export to India; and Russia to Germany, China, and Japan. Because coal production is low cost and low tech, any country with a rail line, a port, and an abundance of coal can be a major exporter. Digging coal out of a pit mine is nothing like drilling 2 miles down in the North Sea. If coal spills, you pick it up. There are no blowout wells.

As opposed to other energy sources, there's an almost endless supply of coal. No one talks of "peak coal." So, coal isn't affected by new finds, dwindling supply, or politics in the Middle East. In this way, it's the most honest of energy commodities.

The top importers of coal are...

Coal mining exacts a tremendous toll on the environment to the point of destroying mountain ranges and polluting waterways. Black lung is a killer for miners. Underground seams of coal have been known to catch fire and burn for years.

There are thousands of underground seam fires around the world. The most publicized might be the one that's still burning underneath the now empty town of Centralia, Pennsylvania. One in India has been burning since 1916.

But the real problem is the waste products that are produced after it's burned.

Coal plants produce the largest amount of carbon dioxide (CO2) emissions in the world. Scientists believe CO2 is the primary cause of global warming or climate change. In 2011, utility coal plants in the U.S. emitted a total of 1.7 billion tons of CO2. All by itself, a 1970-era coal plant generates 3.5 million tons of CO2 per year.

Burning coal, especially brown coal, is a leading cause of smog, acid rain, and toxic air pollution. China has an epic problem with air pollution. Recent air pollution was so bad that it was reported as "beyond index," according to the U.S. Embassy's American Air Quality Index (AQI).

As someone who's not only traveled to China but also suffered traveling in India under the great Asian brown cloud, I can tell you that air quality is a real problem.

These emissions can be fixed with scrubbers and other technologies. But these are expensive and inefficient.

But that's not all. A usual coal plant produces 114 pounds of lead, 4 lb. of cadmium, and other toxic heavy metals. It also spews forth 720 tons of carbon monoxide, 220 tons of hydrocarbons, and 225 lb. of arsenic.

According to the International Energy Agency (IEA), there are over 2,300 coal-fired power stations in the world.

From a climate perspective, the ideal scenario would be for China to shut down all its coal-fired power plants and switch over to clean energy. But that can't happen — China's energy economy is a massive ship that can't turn on a dime.

But China is going green, just not the way you think. China signed the Paris agreement, which includes a promise to install 800 gigawatts to 1,000 GW of new renewable capacity by 2030. This is an amount that's equivalent to the capacity of the entire U.S. electricity system.

China and the U.S. have around the same landmass, but China has 1.3 billion people to the U.S.' 325 million. It needs an electricity system that's much larger. So, adding the renewable equivalent of one entire U.S. electricity system isn't enough to replace coal in the near to medium term.

To bridge the gap, China is rolling out new technologies to drastically reduce local air pollution and climate emissions from the nation's remaining coal plants:

Not all coal-fired power is created equal. Emissions and efficiency vary dramatically based on the type of coal and coal-burning technology used. China has been steadily shutting down the nation's older, low-efficiency, and high-emissions plants to replace them with new, lower emitting coal plants that are more efficient than anything operating in the U.S.

But China needs the higher-quality coal. To get it, it imports from the U.S. and Australia.

So, even though Wall Street thinks coal is dead, coal prices and exports have been trending upward. One U.S.-based coal company that I've discovered grew earnings by 37% last quarter and is paying a 10.61% dividend. And it has a price-to-earnings ratio (P/E) of 6.85! That's crazy undervalued.

Click here to find out how to start making money today.