In February 2021, a series of severe winter storms swept over Texas, disabling a variety of power sources as electrical demand surged due to cold temperatures.

The result was a massive power outage that darkened nearly 5 million homes and businesses for weeks and killed at least 151 Texans.

Satellite images of Houston before and after the first storm on February 10. Source: https://en.wikipedia.org/wiki/2021_Texas_power_crisis#/media/File:Houston_bmhd_2021047_lrg_Feb_16_2021.jpg

In the aftermath of the power crisis, partisan misinformation over the cause of the disaster was widespread.

Both of these claims are false. The proximate cause of the disaster, according to state and federal investigators, was actually the failure of several inadequately winterized gas power plants.

But perhaps more importantly, the crisis got as bad as it did because Texas’s grid was completely unprepared to handle large fluctuations in the supply and demand of electricity because it had next to no storage capacity.

Indeed, as governments around the country (and world) scramble to avoid becoming the next Texas, energy storage technology is becoming a hot investment...

How Intermittent Wind and Solar Are Boosting Demand for Energy Storage

Abbott was wrong in his assertion that the intermittency of carbon-free energy sources like wind and solar was the cause of the Texas power outage. But he’s not wrong in pointing out that these sources have reliability issues. 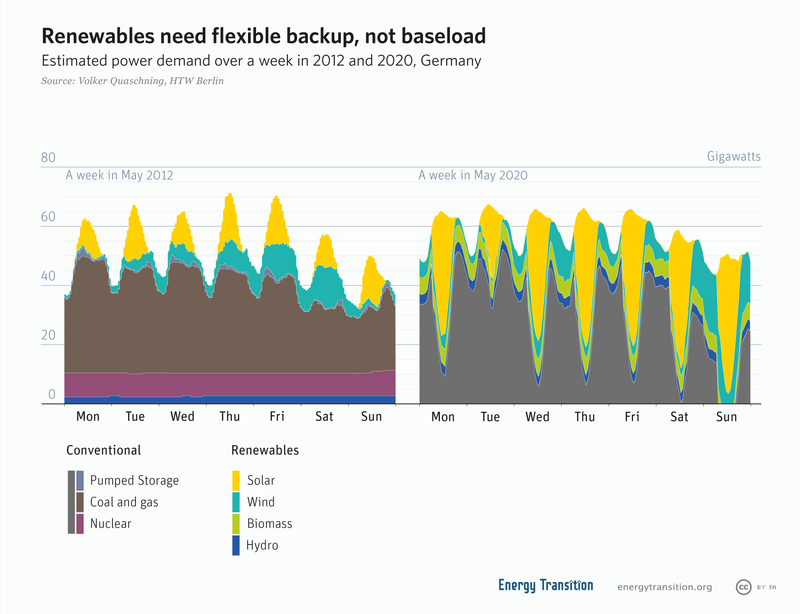 As you can see, wind and solar power were able to handle most of the load on some days, but on others, they were totally inadequate, and German consumers relied on their remaining coal plants to keep the lights on.

In a world without those coal plants, electrical grids would need massive, utility-scale battery facilities to store the excess power on sunny or windy days and deploy it on overcast or stagnant days.

But even in a world with more reliable energy sources, grid operators will likely need substantial storage capacity to handle changes in supply and demand.

After all, there’s only one carbon-free, non-intermittent energy source that is available today at a large scale: nuclear power. And nuclear reactors are notoriously difficult to start and stop on short notice...

Nuclear Power Has the Opposite Problem... but Still Needs Storage Capacity

All three of the most serious nuclear accidents in history — Chernobyl, Fukushima Daiichi, and Three Mile Island — actually involved reactors that had recently been shut down or were running at unusually low power output levels.

You see, a nuclear power plant works by using the heat from a nuclear reactor (shown in red and orange in the diagram below) to boil a coolant into steam, which is used to spin turbines and generate electricity before being cooled, recondensed, and pumped back into the reactor. 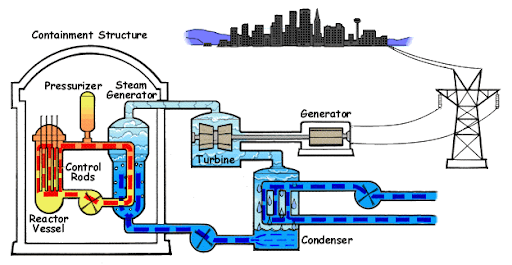 The function of this coolant system, however, is not just to spin the turbines. It also cools the reactor, whose radioactivity can passively generate a potentially dangerous amount of “decay heat” for several hours even after it has been shut down.

If the amount of coolant flowing through the reactor is suddenly reduced — say, due to an unexpected shutdown in which technicians don’t have time to gradually shut off and cool the reactor — the radioactive fuel inside can overheat and melt through its containment structures, releasing extremely radioactive material into the surrounding environment.

The best way to prevent such disasters is to keep as much coolant pumping through the reactor as possible, which in practice, means running nuclear power plants at full output 24/7.

Given that the U.S. is building new reactors, like Plant Vogtle III and IV in Georgia, and investing hundreds of millions of dollars in the federal Advanced Reactor Demonstration Program, American grid operators could soon face pervasive surpluses of nuclear-generated electricity on low-demand days.

There are two possible responses to such surpluses. One is to try to reduce the power output of nearby nuclear plants and risk a catastrophic coolant failure accident. The other, much safer solution is to store the excess power in utility-scale battery installations.

In sum, every type of carbon-free energy comes with unique challenges which can be solved with utility-scale battery technology. Wind and solar aren’t reliable enough to run high-tech, urbanized economies on, while nuclear is too reliable to effectively respond to the characteristic volatility of power usage.

So how does one invest in utility-scale battery technology, exactly?

The Easiest Way to Invest in Energy Storage

It isn’t easy to find individual companies that operate entirely in the utility-scale battery niche.

Many of the biggest players, like NextEra Energy (NYSE: NEE) and Toshiba (OTC: TOSYY), are diversified giants whose battery interests make up a negligible portion of their total business. And many small pure plays, like ESS Inc., are private startups.

With this in mind, exchange-traded funds (ETFs) that focus on battery technology are the best ways for most investors to get exposure to the industry. Fortunately, two battery tech ETFs happen to be great investments in their own right.

The fund has an expense ratio of 0.59% and pays a 0.21% dividend. Its price-to-earnings (P/E) ratio of 32.81 is a bit steep by conventional standards but not when you consider the potential earnings growth in its portfolio companies’ futures.

As you can see above, both funds have trounced the broader markets in the last year, and as we’ve discussed, they have lots more growing to do in the years ahead as solar, wind, and nuclear power make up a growing share of America’s energy resources.

For more cutting-edge investment research on the future of the energy industry, check out Energy Investor. Editor Keith Kohl currently sports an average gain per play of 23.10% — far above what you can get with a broad market index. Click here to learn more.