Our wealth of natural gas is the worst-kept secret in the U.S. energy sector today.

I also can’t think of a more beaten-down commodity over the last decade.

Just think, natural gas on the Henry Hub was trading for a staggering $12.69 per million British thermal units (BTUs) in June 2008.

Mind you, this was four years after a little-known company named Range Resources completed its Renz-1 well.

It drilled its vertical well into the Marcellus Formation in western Pennsylvania.

Prior to that, companies were having wild success combining horizontal drilling with hydraulic fracturing techniques down in Texas’ Barnett Shale.

Why not try it here?

That was the beginning of the end of our dependence on foreign natural gas.

However, there are also severe consequences at home.

As our annual natural gas output swelled over the last decade to over 40 trillion cubic feet in 2019, it took a devastating toll on prices.

Last June, the spot price for natural gas on the Henry Hub averaged $1.77 per MMBTUs.

Yet for the first time in recent memory, some natural gas bulls are sharpening their horns.

And you may not want to sleep on natural gas much longer.

This past summer we learned just how much the U.S. relies on its vast natural gas resources.

During an intense period of hot weather, gas was the savior for many of us as our electricity demand for it soared to a record 47.2 billion cubic feet (Bcf) on July 27.

If you ever feel frustrated by your monthly power bill, just close your eyes, take a deep breath, and imagine how much you would’ve paid if gas prices on the Henry Hub were still $12.69 per MMBTU.

Globally, however, demand for natural gas took a 4% haircut due to COVID-19.

And the future looks much, much brighter.

The International Energy Agency (IEA) gave investors a road map to help them take advantage of a natural gas bull over the next five years.

Though COVID had its impact on short-term demand, the outlook heading through 2025 paints a bullish picture.

According to the IEA, global gas demand is expected to not only recover in 2021 but experience steady growth through 2025: 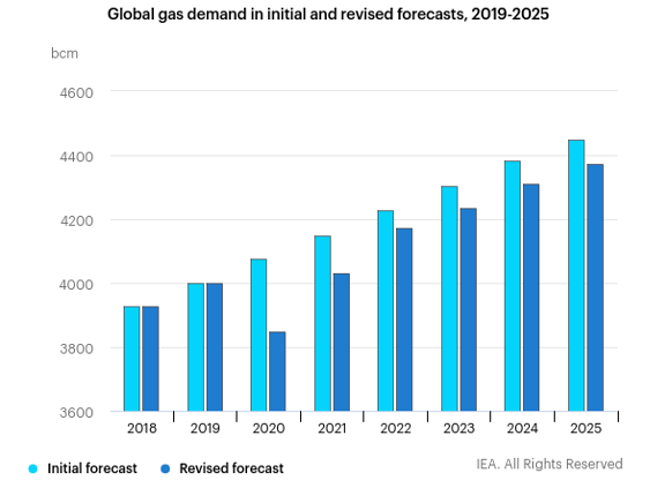 There’s one major issue with being overly bullish on natural gas right now.

No matter how you slice it, we still haven’t addressed the glut of gas right now in the U.S. The reason we’re using so much of it is because it’s dirt cheap!

That is all thanks to both the flood of tight gas production in the Marcellus as well as the huge amounts of natural gas being extracted from oil wells, particularly in the Permian Basin — enough to make the 1.5 billion cubic feet currently shut in from Hurricane Laura look like peanuts.

This month, the EIA expects natural gas output in the Appalachia region to average 32.6 Bcf per day.

Meanwhile, demand for natural gas is expected to decline to 78.7 Bcf per day in 2021.

Looking forward, the bullish case rests on how quickly the fundamentals tighten back up.

According to the IEA, upstream spending by shale gas companies is expected to be cut in half this year compared with 2019.

Remember, it’s not just oil drillers that are taking their rigs out of the field.

That’s 90 fewer rigs than a year ago.

If the U.S. shale patch has one Achilles’ heel, it’s drilling. Due to the steeper decline rates experienced by these tight natural gas wells, companies have to drill at a feverish pace to push growth.

But you know the saying, right?

A crisis for one investor is an opportunity for another, and the looming question on your mind should be: Where is your edge as an investor?

Well, consider that this natural gas bull is poised to rage through a china shop.

Bull in a China Shop

One thing that has become clear as we move toward a post-COVID life is that Asia will be a major catalyst for future demand growth.

In fact, the Asia-Pacific region will be responsible for more than half of incremental demand over the next five years.

Moreover, its natural gas use in the industrial sector will make up the largest amount of that growth.

Unfortunately, China’s own shale gas revolution never got kick-started the way it did in the U.S. In fact, the country has all but given up hope of becoming a powerhouse natural gas producer.

This is a huge turn of favor for natural gas investors.

Even throughout this COVID environment, China’s natural gas demand is expected to rise 7.7% during the second half of 2020; that’s 337 billion cubic meters by year-end.

Our oil and LNG exports to China have already spiked higher this year thanks to the trade deal.

That may not be as much as some were hoping, but exporters are finally getting their foot back in the door.