It happens every year without fail — that moment when you wake up shivering one morning and it hits you that summer is gone and the cool days of autumn are quickly turning bitter cold.

You get up, and for the first time in a long while, you click the switch on your thermostat and put the heat on.

Most people trudge back under the covers without much thought.

But for some reason, the first time I click on that switch, all I can think about is one thing: Pennsylvania.

Despite the fact that I lived in the Keystone State for most of my life, there’s another reason that first trip to the thermostat makes my mind drift back to PA.

Actually, there are 6.2 trillion reasons why: natural gas.

Whenever winter weather starts to settle in, natural gas investors breathe a slight sigh of relief. Record-cold temps have gripped the central, eastern, and southern parts of the country.

We’re expecting prices to climb even higher over the short term as winter weather slams into parts of the U.S. It’s barely into November, and parts of New England are expected to be hammered with snowstorms.

Make no mistake: This is incredibly bullish for natural gas investors.

So, what’s our outlook going forward?

Although exports have been driving profits for natural gas investors, it was still a painful year for the rest of the market.

The EIA expects natural gas prices at the Henry Hub to average about $2.67/Mcf this year. If true, it would mean prices dropped 18% year over year.

And they’re projecting even weaker prices ahead, too.

When the EIA released its latest "Short Term Energy Outlook" last month, it projected Henry Hub spot prices to decline another 2.2% and average $2.61/Mcf in 2020.

In fact, natural gas prices in each sector are expected to fall next year.

Look, we certainly can’t blame the demand side of the equation for weaker prices. As you can see below, U.S. natural gas consumption has been steadily growing for the last 33 years:

Natural gas accounted for more than 35% of our electrical generation in 2018 — well over coal’s falling share and more than double that from renewables.

To put a little perspective on that, the electric power sector makes up almost 37% of the United States’ total energy consumption.

And as President Trump recently announced our official withdrawal from the Paris Climate Accord, I can’t help but think natural gas is the biggest reason U.S. greenhouse gas emissions are falling.

With all this bullish news for natural gas, you have to wonder by now what’s keeping a lid on prices.

Well, that brings us full circle to Pennsylvania.

I know this doesn’t come as a surprise to anyone in our investment community. We’ve been tracking Marcellus Shale boom since Range Resources drilled its first exploratory wells in the play.

And we’ve come quite far since those early days.

Here’s a quick look at natural gas production in the Appalachian region: 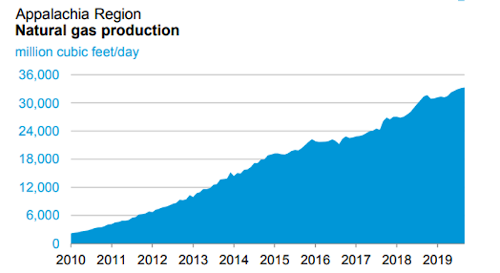 Last month, an estimated 33.1 billion cubic feet of natural gas was extracted from the Marcellus play.

More than a decade after the Marcellus Shale boom was sparked, and the U.S. is still awash in natural gas.

And it’s with this supply in mind that it’s important investors are at the future of natural gas.

What is the future of natural gas?

That’s probably the first thing that pops into the head of any investor looking to get a jump on natural gas investments... and it should.

The first application to export liquefied natural gas out of the U.S. arrived on the Department of Energy’s doorstep back on August 11, 2010.

It took less than four weeks for it to get the green light.

Then Cheniere Energy became the first U.S. LNG exporter after a shipment left its Sabine Pass terminal in February 2016.

That year, approximately 187 billion cubic feet of liquefied natural gas was exported from the United States.

In 2019, we surpassed that amount in the first eight months of the year.

Shell’s “LNG Outlook 2019” painted a very bullish picture for us, reporting earlier this year that global LNG demand will reach 384 million tonnes by 2020.

Of course, LNG exports that would tap into strong Asian demand would immediately pop into anyone’s head as the best natural gas investments going forward.

But what if they aren’t?

What if I told you that just ONE country bought more U.S. natural gas than all of our LNG exports combined?

Not only did this premium customer buy up 1.7 trillion cubic feet of U.S. natural gas in 2018, its thirst for natural gas is climbing at an alarming rate.

And no, I’m NOT talking about China.

Who is this mystery shopper?

Take a look south of the border, and you might be surprised to find that Mexico is buying a staggering amount of our natural gas:

Locking up LNG Profits in 2020

You might think companies are restricted to a certain amount of natural gas they can send to Mexico.

That’s true for the most part, since there’s only so much pipeline capacity that flows into Mexico.

But that may not be the case for much longer.

Right now, the Department of Transportation is weighing the decision to allow companies to transport LNG by rail.

For areas with pipeline constraints — areas, say, like the Permian Basin, where pipeline bottlenecks have become common — this would be a game-changer for the U.S. LNG market.

Think it’s crazy? Well, keep in mind that this won’t be the first time it’s been done.

Truth is, we’ve already tried it out in Alaska.

Back in 2015, Alaska Railroad was granted a two-year permit that would let it ship a dozen LNG cars per train during this pilot project.

Although the final decision won’t come for another few months, approval would be a boon for major rail players.

If Trump green-lights LNG-by-rail, perhaps the biggest winner might just be Union Pacific (NYSE: UNP), one of the largest providers of rail transportation between the U.S. and Mexico.

More importantly, Mexico’s reliance on our natural gas will grow even higher as more of its gas-fired power plants come online.

Now, Trump is about to open up another door for exporters.

Will you be ready?

Energy and Capital, Copyright © 2020, Angel Publishing LLC. All rights reserved. 3 E Read Street, Baltimore, MD 21202. The content of this site may not be redistributed without the express written consent of Angel Publishing. Individual editorials, articles and essays appearing on this site may be republished, but only with full attribution of both the author and Energy and Capital as well as a link to www.energyandcapital.com. Your privacy is important to us -- we will never rent or sell your e-mail or personal information. Please read our Privacy Policy. No statement or expression of opinion, or any other matter herein, directly or indirectly, is an offer or the solicitation of an offer to buy or sell the securities or financial instruments mentioned. While we believe the sources of information to be reliable, we in no way represent or guarantee the accuracy of the statements made herein. Energy and Capital does not provide individual investment counseling, act as an investment advisor, or individually advocate the purchase or sale of any security or investment. The publisher, editors and consultants of Angel Publishing may actively trade in the investments discussed in this publication. They may have substantial positions in the securities recommended and may increase or decrease such positions without notice. Neither the publisher nor the editors are registered investment advisors. Subscribers should not view this publication as offering personalized legal or investment counseling. Investments recommended in this publication should be made only after consulting with your investment advisor and only after reviewing the prospectus or financial statements of the company in question.