Two surging gas stocks could be the future of your portfolio too...

In 1764, King George ended a long-running feud between the colonies of Massachusetts, New Hampshire, and New York.

He proclaimed that the area now known as Vermont belonged to the New York colony, ever increasing his role in colonial affairs (a problem that would soon come to a head, as you well know).

When officials from New York tried to divvy up Vermont into counties and townships, locals formed together and fought back against New Yorkers, declaring they would form their own state or even their own country.

Settlers assembled militias to protect themselves from the government in New York and stay free of its laws.

In January of 1777, the Vermont Declaration of Independence was signed, establishing the region's independence as a state, which wouldn't be recognized by New York until 1790.

Although many have tried, this is the only time a state has successfully seceded from its parent.

And it took the distraction of the Revolutionary War to make it possible. Every try since then has failed.

In the state of Maryland, for example, many citizens and government officials feel neglected in the Western region and have threatened secession, but they have found hardly any support.

Meanwhile, in New York, there have been several attempts to split the state so as to better serve voters who don't live in New York City. All have been rejected.

But after a recent decision by New York's Governor, parts of the state are threatening to secede once again...

He made this decision after listening to a presentation on the effects fracking might have in New York. Cuomo said, “I will be bound by what the experts say.”

And the experts derided hydraulic fracturing as an environmentally irresponsible danger to public health.

One expert wrote that he wouldn't allow his daughter to play on a playground in areas near fracking sites.

This all despite the fact that several other states have seen huge economic benefits from the stimulation fracturing provides.

Of course, jobs aren't the end-all, be-all of deciding whether it's right to do something — health and environment should be considered. But New York's Southern communities are desperate...

These communities sit in what's called the Southern Tier, a once-vibrant area that lies on the border of Pennsylvania. It was once home to companies like IBM, Corning, and Lockheed Martin. 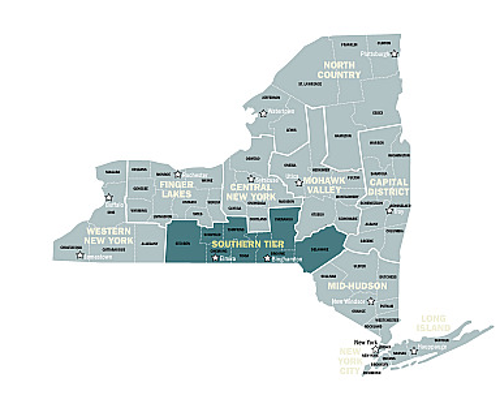 Although some of these companies are still there, it's mostly a formality, with many of the manufacturing jobs shipped abroad as corporations hunt for a smaller payroll.

Some towns can't even afford police departments, while others go without crucial businesses like funeral homes.

With jobs and opportunity dried up, many communities in the Southern Tier were banking on Gov. Cuomo to allow fracking permits and help these towns rebuild.

But he decided to ban it. And as a second blow, a state panel rejected a bid for a casino in the Southern Tier on the same day.

Now the area is fighting for a final way out of the burdensome regulation of the Governor.

Much like the militias of Revolutionary Vermont — albeit less violent — the people of the Southern Tier are fighting to join Pennsylvania.

And there's no question as to why...

The Southern Tier sits on the crown of the Marcellus Shale formation, and the people who live there were hoping fracking would rescue them as it has for people in North Dakota, Southwest Texas, and Pennsylvania.

But with it officially banned in New York, lawmakers in the Southern Tier are surveying residents to explore secession into Pennsylvania, the neighbor who has seen the full benefits of hydraulic fracturing.

For example, Bradford County in Northern Pennsylvania has seen the taxable income of its residents rise by 25% from 2007 to 2011.

Pennsylvania's new governor Tom Wolf and the state's government are planning on using about $1 billion worth of the extra revenue provided from drilling taxes to help improve some of PA's struggling school districts.

And as of December, Pennsylvania's unemployment rate stood at 4.8%, much lower than the rest of the nation (including New York), a lot of which can be attributed to Marcellus jobs.

So it's very much visible to the people of New York that fracking is rescuing towns just across the border.

Pennsylvania as well as West Virginia sit above the Marcellus and, over the last few years, have become the new frontiers for natural gas production in the U.S. 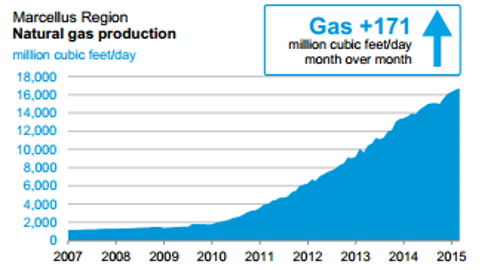 As you can see in the chart above, the Marcellus was producing roughly 17 billion cubic feet of gas each day as of February. And that number is steadily rising, with the bulk of production coming from Pennsylvania and West Virginia.

As technology improves, so too will the amount of gas harvested and the money brought in to stimulate the economies of West Virginia and Pennsylvania... all while New York sits on the sidelines.

It goes without saying that new technology will also help limit risks to the environment and public health. But Governor Cuomo doesn't see it that way.

So residents of the Southern Tier will have to leave the area, hope the governor will change his mind, or secede into Pennsylvania — an unlikely prospect, as it hasn't happened since 1777.

Plus, it would take approval from New York, Pennsylvania, and Congress for it to happen.

In the meantime, if you'd like to better understand how economically powerful hydraulic fracturing is, especially in the Marcellus, I suggest you heed the investment advice below...

Per the Energy Information Administration, natural gas output is expected to rise 3.2% in 2015, despite the roughly 30% drop in prices last year as companies employ new technologies and methods to boost efficiency.

This efficiency is evident when you compare the rig count numbers to production numbers as shown below... 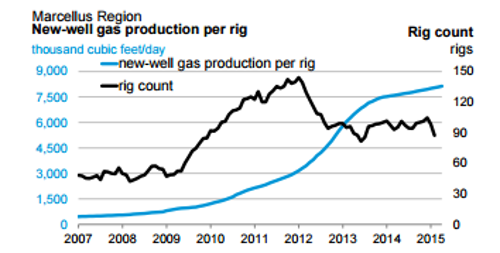 Companies will use tactics like multi-well pad drilling, where multiple wells are drilled on a single site, unheard of until a couple of years ago.

Some are increasing the length of their horizontal wells (a key factor for hydraulic fracturing operations) in order to reach more shale.

Now, let me be clear about something: the Marcellus Shale is not for oil investors. Sure, there's some there, but the bulk of production is natural gas.

And with the natural gas price environment the way it is, now is the best time to buy...

Natural gas prices have fallen 81% from their highs in 2008, as the share prices of drillers fell with them. For these reasons, Forbes recently said “A bottom for U.S. Natural Gas is in Sight.”

It makes sense that we're close to seeing a bottom, if we haven't already passed that point. I mean, despite the dramatic drop in prices, companies have still managed to lower their costs below the price of gas.

So devaluation is already overselling the stocks that drill there, especially those with great assets and a large number of wells like the two below.

One, Cabot Oil & Gas (NYSE: COG), is the biggest producer in the Marcellus, while the other, Talisman Energy (NYSE: TLM), is an undervalued play that has a lot of upside. It's cheap and can (and probably will) see quick gains.

Here's some of their particulars. 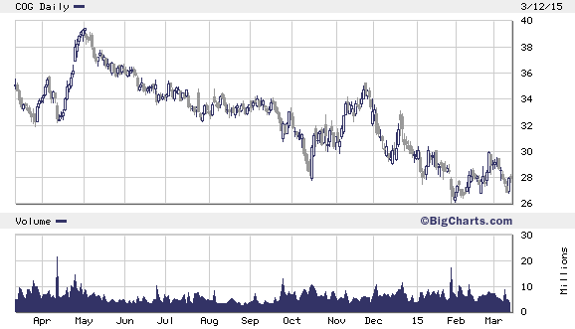 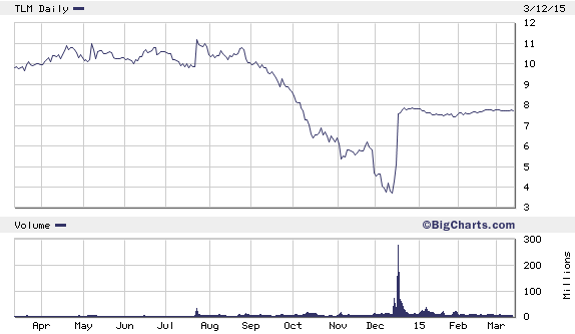 Both of these companies are poised for growth as the Marcellus, the largest shale gas field in the world, supplies the transition in world energy consumption. Coal is becoming a less widely used source of electricity, and natural gas has become the gold standard.

Manufacturers are using it to create chemicals and fertilizers while midstream companies are preparing to export liquefied natural gas abroad to Asia, Europe, and South America.

These developments are only the tip of the iceberg in terms of the financial powers of natural gas, and, specifically, the Marcellus Shale. Although New York has decided to ban drilling in the Marcellus, Pennsylvania and West Virginia have increased production at nearly unfathomable rates.

Soon, New York's government will be forced by financial necessity to reconsider the Marcellus and hydraulic fracturing. In the meantime, investors should focus on Pennsylvania and West Virgina.

These two stocks are poised to join the coming bull market in natural gas and the future of American energy profits. Investors should too.