Special Report: Investing in Venezuela's Downfall: the Good, the Bad, and the Ugly

Venezuela is not doing too well… The papers report staggeringly high inflation and people starving on the streets.

So why is this once solid country doing so poorly?

Well, a plethora of things have led to its downfall, but a huge part of it was its unhealthy reliance on oil and socialism. Venezuela has more oil reserves than any country in the world, even beating out the hugely oil-rich Saudi Arabia. According to Forbes, “If Saudi Arabia's state-owned oil firm ARAMCO is worth about $3 trillion with some 310 billion of oil reserves, then Venezuela's comparable oil major PDVSA is worth nearly the same with around 510 billion barrels of estimated recoverable oil reserves there.”

Huge problems hit the country when oil tanked between 2014 and 2016. Suddenly oil, which used to sell for $115 a barrel in 2014, dropped to below $40, and has been struggling to hold gains ever since.

Venezuela fell as oil did.

According to oilprice.com, “Venezuela does have some of the largest oil reserves in the world, but much of its oil production occurs at mature fields that require maintenance. But maintenance requires cash, something that is increasingly scarce in the country. Venezuela’s state-owned PDVSA was already failing to properly invest in oil production even when oil prices were in triple-digit territory... In fact, production has been gradually declining for more than a decade.” 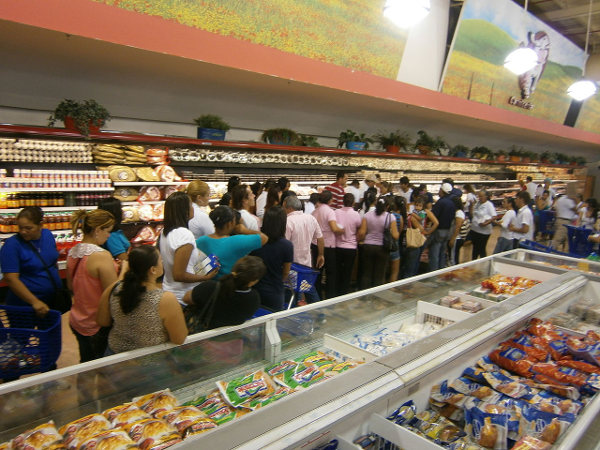 This fall has lead to a staggering hyperinflation rate of 500%. The current U.S. inflation rate is 1.6%. The difference is shocking, and it’s the reason so many Venezuelans are paying for a bag of rice with suitcases full of money.

According to The Guardian, “the 100-bolivar note, which is currently worth only two US cents (1.6p) on the black market... Central bank data showed that in November, there were more than 6bn 100-bolivar bills in circulation, 48% of all bills and coins... The oil-producing nation’s currency has fallen 55% against the US dollar on the black market in the past month.”

People are starving in the streets, and according to The Guardian, “the Bengoa Foundation for Food and Nutrition estimates that 25% of children are malnourished.”

This had led to extreme unrest, rampant crime, and whispers of revolution on every street. President Maduro, who many blame for the crisis, is hugely unpopular. According to the Wall Street Journal, “In 1998, Hugo Chávez rode to power on a wave of populism. His socialist overhaul, though, sent the Venezuelan economy into a tailspin that his successor, Mr. Maduro, has made worse. To save scarce dollars for bond payments, the government is halting basic infrastructure maintenance and abandoning subsidies on food and services, making life increasingly difficult for ordinary Venezuelans and fueling runaway inflation.”

The government continues to try to keep a white-knuckled hold on the situation, but revolution is likely not far behind. After all, the worst thing you can do to a country is not feed its people.

But the odd thing is that the country is better for investors than you might think.

At least it is for gutsy bond investors.

You see, through all the turmoil, Venezuela has finally begun defaulting on some of its debts, which has had some interesting benefits for holders of those debts.

According to Forbes, "‘The price of bonds is so low that under most scenarios, there is upside on the bonds even in the event of a default’, says Jan Dehn, head of research and an emerging markets bond analyst for Ashmore Group, a London-based investment bank… PDVSA, Venezuela's preferred bond for foreign investors, is unlikely to default. It has a constant need to access capital credit lines for working credit. A default would cut off those credit lines. Oil production would be threatened and this is Venezuela's prime source of revenue.”

In June of 2016, Venezuela defaulted on part of the $2.5 billion loan it owned to fellow oil producer Russia, putting a number of its other debts in doubt. Bonds held on the country's $3 billion government bond, which it enacted in 2016, yielded 29.3% for investors trading the bonds at 57 cents.

As you see, if you do decide to invest in Venezuelan debt, the reward could be sweet indeed.

According to Forbes, “The Venezuela EMBI Global Diversified index bond spread is currently 2,419 basis points over U.S. treasuries. Duration is about 3.42 years so that spread is compared to the U.S. three-year. Investors who can buy speculative grade debt and hold it long term will be paid more than 24% in yield, and that doesn't count the capital gains they'll get when spreads tighten and bond prices rise on the news that Maduro is a goner.”

No one knows for sure where a stock is going to go, and Venezuelan investing is certainly more fraught with danger than most, but if you want a high-risk, high-reward investment, Venezuelan bonds could be right up your alley.