Can you guess what the average American life expectancy was 100 years ago?

I’ll give you a hint: It was a lot lower than it is today.

The average American lived just 60.9 years in 1921 — while the average American today lives 79.11 years. Our national life expectancy has risen by 30% in the last century, and there are nearly 100,000 Americans alive today who are more than 100 years old. 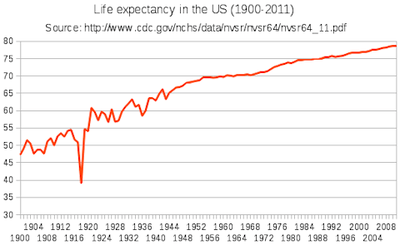 Much of that gain is attributable to the invention of new medicines, like antibiotics, which made once-deadly diseases like typhoid and tuberculosis curable. And there’s reason to believe that there are more life-extending discoveries in our future.

In fact, Dr. Steven Austad, chairman of the biology department at the University of Alabama, believes that the first 150-year-old has already been born. Dr. Stuart Kim, a professor of biology at Stanford University, is even more optimistic — he thinks the first 200-year-old is alive today.

So what are these future life-extending technologies?

Here at Energy and Capital, we can’t predict the future — but we can identify the trends that will shape it. Anti-aging technology will absolutely be one of those trends; the market for anti-aging therapies is expected to reach $65 billion before the end of the decade, according to Mordor Intelligence.

Below, we’re breaking down some of the most exciting areas of anti-aging research today — and profiling the publicly traded companies spearheading that research.

Here’s a simple but surprisingly difficult question: What is the biological process that drives aging?

As we’ll discuss in this report, there isn’t really a single complete answer. Aging is driven by a combination of internal processes — some cellular-level, some organ- or whole-body level — and external factors like environmental exposure and common diseases.

But on the microscopic scale, one of the most fundamental drivers of aging is a process called cellular senescence — the tendency for a lineage of cells to stop dividing and die out after a certain number of generations (human cell lineages typically die after about 50 divisions).

On the one hand, cellular senescence isn’t an entirely negative process; it’s believed to play a role in tumor prevention by limiting the reproductive potential of old, potentially damaged cells.

A number of small biotech companies are developing drugs that aim to reduce or delay cellular senescence. Unity Biotechnology (NASDAQ: UBX) is developing a suite of anti-senescence drugs to treat age-related eye and neurological disorders — one of which is in Phase 2 clinical trials.

AgeX Therapeutics (NYSE: AGE) is also developing anti-senescence drugs to treat age-related cardiac and metabolic disorders. All of its products are still in preclinical trials at the time of writing.

Both stocks are tiny; their combined market cap is currently under $200 million. And both have had a rough year, as you can see above. But these small caps could provide investors with a way to profit from anti-senescence technology that can slow down aging at the cellular level.

People have been trying to extend their lives through lifestyle changes for a very long time — and most of these lifestyle changes (for example, cryotherapy and large-dose vitamin supplementation) are of dubious efficacy.

But one lifestyle factor that has a well-proven relationship with longevity is daily caloric intake. People have long known that survivors of near-starvation experiences like famines tend to live unusually long lives. What’s more, many cultures around the world encourage some form of intermittent fasting as a life-extending health activity.

In the last few decades, laboratory tests on rats and mice have confirmed that careful caloric restriction appears to extend the lives of many mammals, although the biological mechanism for this is not well understood.

The problem, of course, is that caloric restriction isn’t easy. There’s a fine line between caloric restriction and malnutrition. And even if one stays on the healthy side of that line, reducing one’s food intake obviously has unpleasant side effects — like hunger, irritability, and fatigue — which may not be tolerable for many working adults.

In 2004, Harvard University biologist David Sinclair formed a biotech company called Sirtris Pharmaceuticals, which is dedicated to researching CRMs that mimic the effects of food reduction by increasing the production of regenerative sirtuin enzymes. In 2008, Sirtris was acquired by GlaxoSmithKline (NYSE: GSK), which has continued the development of its CRMs.

Sanofi (NASDAQ: SNY) has gotten a hunger-reducing CRM to market before. Rimonabant (trade name Acomplia) is a cannabinoid-receptor-blocking drug that has been sold in the European Union as a treatment for obesity. Research into its life-extending effects is ongoing.

In contrast to the previous two stocks we discussed, GSK and Sanofi are both blue chips; as you can see above, Sanofi shares have been roughly flat this year, while GSK has made modest gains.

One of the most promising areas of anti-aging research involves stem cells, or “unspecialized” precursor cells that can transform into different cell types.

Stem cell extraction is a controversial process; one of the best sources of human stem cells is human embryos, and some religious groups object to embryonic stem cell production on the same grounds as abortion.

As you can see above, all three of these stocks are volatile small caps, two of which have seen substantial gains this year. Lineage shareholders are up more than 87% in the last 12 months, while U.S. Stem Cell shareholders had a chance at over 1,000% gains during the meme stock craze earlier this year.

These genes may be linked to longevity — and some researchers believe that gene editing therapies could extend the human life span by “inducing” them in naturally unaffected people.

Cancer is also the second-most-common cause of death in people over the age of 65 — and many cancers are known to have genetic risk factors that could be ameliorated through gene editing.

These three stocks are the only midcaps we’ll discuss in this report; their market caps are all between $2 billion and $10 billion. And as you can see above, their performance over the last year has been more animated than GSK and Sanofi but less chaotic than the small caps discussed earlier.

Getting Ahead of the Trend

It’s too early to say which of these companies, if any, will make a penicillin-sized discovery and propel humanity into a new era of 150- and 200-year-olds. But shareholders of the 10 stocks we’ve discussed above have a decent chance of profiting from such a breakthrough.

Many of the stocks in this report are relatively speculative small caps — not the kind of thing you’d want to bet your entire retirement account on.

But by allocating some spare cash to these anti-aging upstarts, you could be getting ahead of one of the biggest medical trends of the 21st century — and profiting from a $65 billion future market.

If you’re interested in profiting from more cutting-edge medical trends, check out Technology and Opportunity. Earlier this fall, subscribers locked in a 113% gain on a single well-timed trade —in less than a month. Learn more here.