I want to revisit an idea I wrote to you about way back in 2016.

At the time, the only action to take was to prepare and wait. But now we're butting up against my prediction, and it’s looking as if I’ll be proven correct.

Instead, a long-term gold bull super-cycle began in the summer of 2001. And it hasn't stopped since.

In fact, despite the drop in prices over the past few years, the long-term gold bull market is actually going exactly as expected.

Problem is, investors simply can't see the forest for the trees.

But if history can be used as any metric of what to look forward to from gold, prices could easily reach as high as $6,500 an ounce within the next 12 months or so.

At that time, the U.S. found it necessary to begin abandoning the quasi-gold standard that had been adopted by the Gold Reserve Act of 1934.

And in August 1971, the Nixon administration announced that it would no longer freely convert U.S. dollars to gold at the official exchange rate.

This marked what many consider the official end of any kind of gold standard in America — and the beginning of a 10-year gold bull market that lasted through January 1980.

Here's the entire gold bull super-cycle of the 1970s from beginning to end: 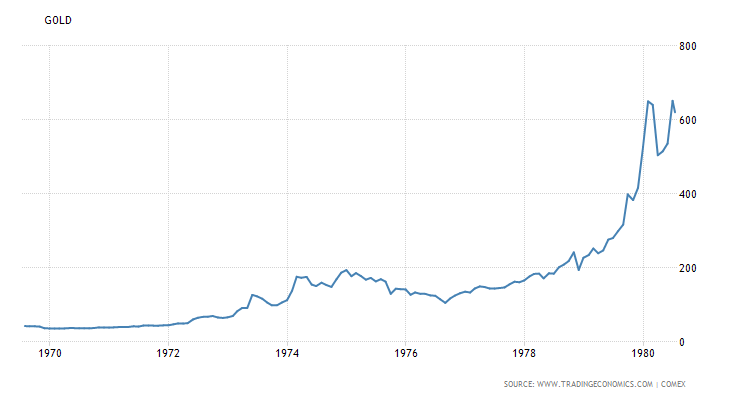 This bull market can be broken down into three general stages, where gold prices first rise, then fall, and finally soar. 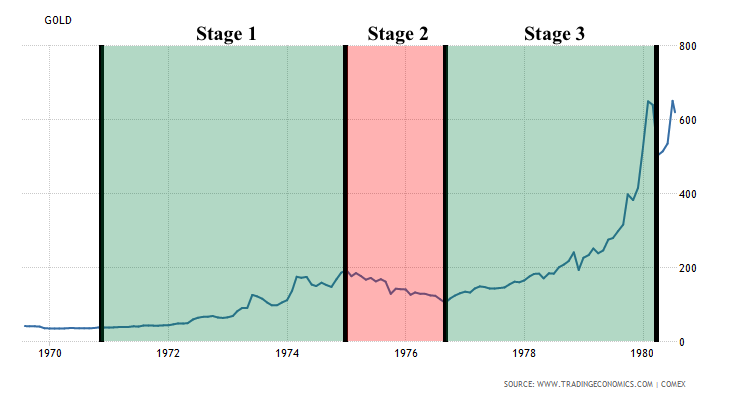 And the whole thing started with old Tricky Dick...

Nixon's move to deny the dollar’s convertibility to gold had an immediate and clear impact on the value of the greenback as measured by the U.S. Dollar Index, which plunged 25% from 1971 to mid-1973.

This led to a period of higher U.S. inflation levels and (in conjunction with the energy crisis) eventually tipped the entire global economy into a recession lasting through 1975. This was the first global recession since WWII.

At that time, there was no private market for gold in the U.S. In fact, Americans didn't fully regain the right to own gold bullion until the last day of 1974. But private gold markets elsewhere around the world did exist. And from the day Nixon halted the dollar’s convertibility to the yellow metal, the price for gold against the U.S. dollar soared nearly 400%. This marked the first stage of the gold super-cycle with gold prices rising.

To answer the American recession in the mid-1970s, the Federal Reserve dropped key interest rates and increased money supply to spur lending and jumpstart the economy. It worked for a very brief period, and the U.S. dollar seemed to recover. And during this second stage of the 1970s gold super-cycle, the price of gold decreased for several months.

But the Fed's monetary policies eventually caught up with it, and the U.S. dollar fell to one of its lowest points in history.

And that's when gold prices took off — hitting record highs and increasing over 500% in less than two years.

Now, here's why all that’s important...

Nearly the same exact scenario started in 2001 and continues to unfold before our very eyes today, with only a few minor exceptions.

Starting in the summer of 2001, the value of the greenback as measured by the U.S Dollar Index started to plunge leading up to the global financial crisis of 2007.

Then the Plunge Protection Team stepped in, with the Federal Reserve cutting key interest rates and (this time) introducing its first round of quantitative easing to spur lending and jumpstart the economy. Any of this sounding a bit familiar?

This time, however, the gold markets weren't restricted in terms of investment vehicle options — meaning the market was significantly larger and more volatile. The result...

The price of gold continued to soar against the U.S. dollar well past the recession and through 2011 to record highs of over $1,900 an ounce, as fears of higher inflation spread. Although it lasted over a longer period of time, and the market was unrestricted in terms of investment vehicles, the period from 2001 to 2011 represents the first stage of the ongoing gold super-cycle.

Some believe that's where the story ended for gold. Because the price of gold dropped for four years straight. But they forget (or never knew) that gold prices also dropped for nearly two years during the super-cycle of the 1970s for the same reasons the yellow metal’s value fell between 2011 and 2015 — resulting in the second stage of the ongoing gold super-cycle.

Just compare gold prices from the first two stages of the 1970s gold bull super-cycle to prices from 2001 to today...

The Plunge Protection Team was able to delay the crash that started in 2007. But we can expect that — again, just like in the 1970s — the Fed's monetary policies will eventually catch up with it and that a crash in the U.S. dollar (and probably another global recession) is inevitable, ushering in the third and final stage of the 21st century gold bull super-cycle.

If we consider gold prices in December 2015 as the bottom, an equivalent 514% increase puts gold over $6,500 an ounce 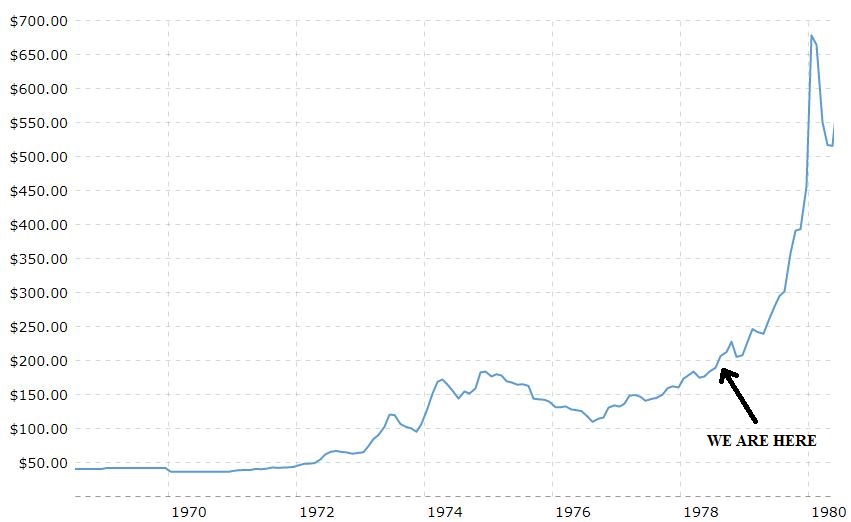 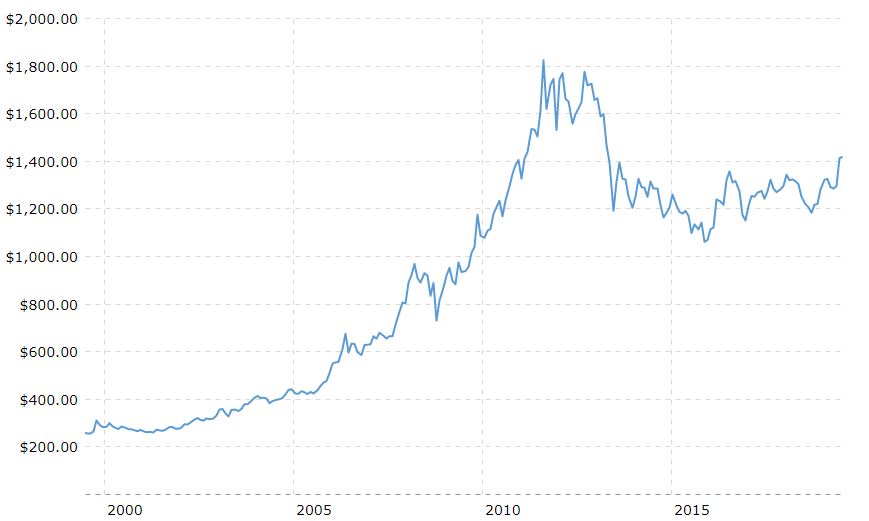 The next financial crisis could make the crash of 2008 look like a fender bender.

And make no mistake about it...

The Federal Reserve and corrupt politicians can’t save the value of the U.S. dollar or your hard-earned assets even if they wanted to. Take control of your own money and do what the smart money did in 1976...

Gold is a form of money, despite what some might want you to believe. Money (the U.S. dollar to you) is nothing more than a medium for labor storage and exchange. Gold is the ultimate medium for labor storage (a.k.a. “wealth storage”). However, it does not make for a great medium for exchange. But that doesn't matter because the goal of this investment is not using physical gold as currency; it’s ultimately to simultaneously hedge against global recession and leverage this coming spike in gold prices.

The safest way to hedge against global recession and leverage this coming spike in gold prices is to diversify your precious metal assets — don't put all your eggs into one gold mine.

You're going to want to own physical gold as well as a portfolio of precious metal stocks, ranging from small-cap exploration companies to major international producers.

The physical gold will protect your labor storage and can be easily converted back into a fiat currency (maybe not the U.S. dollar) for easy exchange at any time.

Larger mining stocks are going to more safely leverage rising gold prices, while small-cap producers and explorers offer greater potential for big returns (with greater risk). And with gold right on the cusp of a breakout, there’s good justification to take those risks.

Avino operates two silver mines in Mexico and has a much larger gold project under development in British Columbia employing about 500 people. The company produces from its wholly owned Avino and San Gonzalo Mines near Durango, Mexico, and is currently planning for future production at the Bralorne Gold Mine in British Columbia. And notably the gold and silver production remains unhedged.

What I like about ASM the most, however, is that the stock actually moves well in reaction to gold prices. More often than not, mostly unknown small-cap gold companies don’t get enough attention to react quickly to changes in commodity prices. ASM is different. The company has a wide following, and shares can often move 5% or more per day with big commodity news.

Another small-cap gold stock that likes to move on news is McEwen Mining (NYSE: MUX). McEwen is a diversified gold and silver producer with operating mines in Nevada, Canada, Mexico, and Argentina. It also owns a large copper deposit in Argentina.

The company is headed by billionaire Rob McEwen, founder and former chairman and chief executive officer of Goldcorp (now a part of Newmont). As such, MUX also has a rather large following, and the stock moves well in reaction to gold prices.

Currently shares of MUX sit at just over $1.80. But with gold still heading higher, MUX could be a $3 or $4 stock in short order.

I don't want to bog you down with a bunch of gold stocks today. But I will be bringing you many more ideas next month based on this $6,500 gold prediction.