Not too many years ago, newspapers and TV channels often used weather-related stories as light filler content for slow news days.

Not anymore. In the last year, weather has often been on the front page — in part because the world’s changing climate has started to produce the kind of scary news stories reporters love to cover.

All of the headlines in the collage below are from different sources and are about different weather-related catastrophes — and they’re all less than a month apart in the summer of 2021. 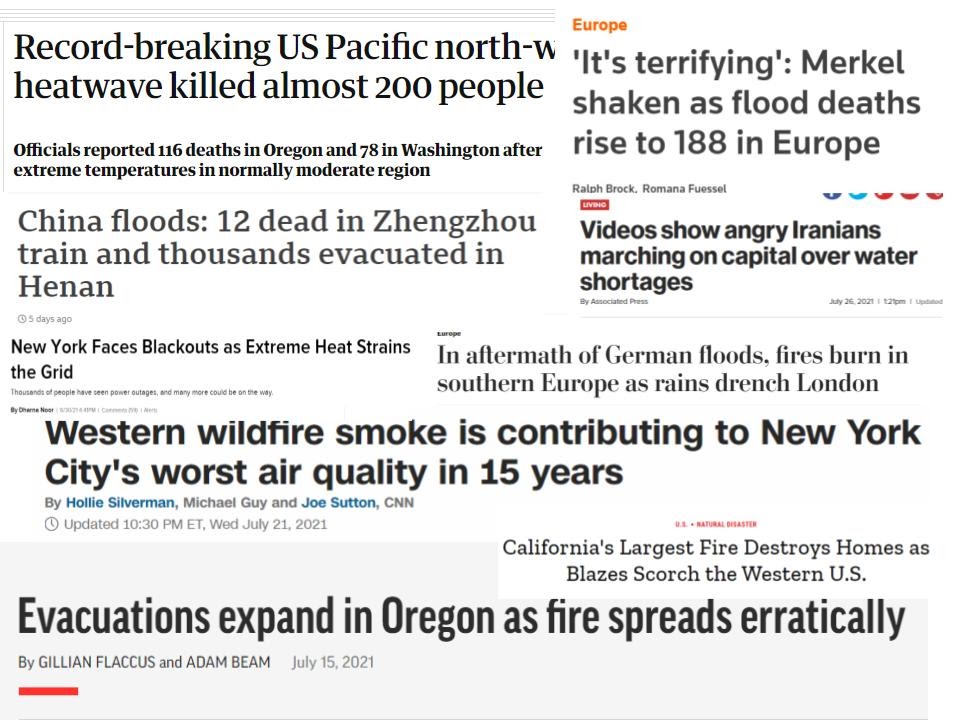 Scientists today almost universally agree that not only is climate change real and human-caused but it’s already underway to a significant degree.

The 197-country Paris Agreement is trying to limit it to an average global temperature increase of 2°C, because we’ve already gone 1°C over average preindustrial temperatures.

There’s really no easy way to say it: We’ve failed to stop a catastrophic degree of climate change — past tense.

It’s still important for us to reduce emissions as fast as possible to try to avoid an apocalyptic worst-case scenario in the centuries ahead, but at this point, we’re in for some disastrous weather events over the next few generations. In fact, they’re already here. See above.

In this bleak climate, a new scientific and engineering discipline has started to emerge alongside environmental sustainability: environmental resilience.

What Is Environmental Resilience, and Why Is the U.S. Government Throwing Tens of Billions of Dollars at It?

Resilience is an emerging concept that doesn’t quite have a universally agreed-upon dictionary definition yet. This report is the first financial publication to describe it as an investable industry; if you google “resilience stocks,” you’ll find a bunch of off-topic articles.

Yet the U.S. government is gearing up to spend tens of billions of dollars on resilience projects over the next decade… so someone needs to define it for investors.

Environmental resilience refers to our ability to prepare for and withstand climate change-related threats like major storms and wildfires. The term is often contrasted with environmental sustainability, which refers to our attempts to prevent or mitigate these things by proactively reducing our environmental impact.

So while sustainability is all about solar panels, carbon capture, and electric cars, resilience is all about seawalls, fireproofing, and storm shelters. It’s a downer industry… but sometimes that’s the world we live in.

The environmental resilience industry may be a depressing place at times, but it’s about to get very lucrative. The White House-backed bipartisan infrastructure bill working its way through Congress calls for the federal government to spend an extra $579 billion over the next five–eight years, of which $47 billion (the olive-green slice of the chart below) will go to resilience projects. 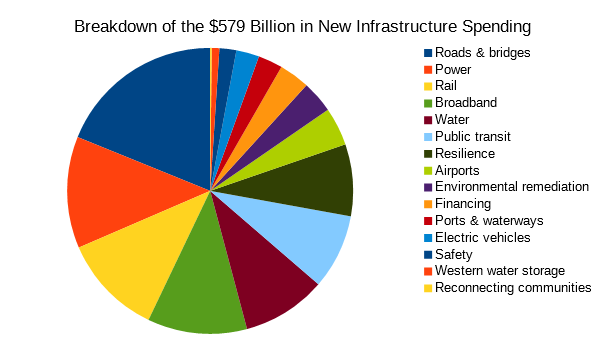 Chart by author, based on White House fact sheet data

But how do investors buy into the resilience industry? After all, the government can’t plan all of its resilience spending in advance. Some of it will inevitably be tied to natural disasters like hurricanes, which can’t be predicted precisely ahead of time.

But by looking at a catastrophic hurricane from the recent past — one scientists say was aggravated by the effects of climate change — we can get an idea of which firms might benefit from future disaster contracts.

For the eastern U.S., one of the most dramatic consequences of climate change in the decades ahead will be an increase in the intensity of hurricanes and tropical storms. The warmer the air in a storm is, the more water it can pick up over the ocean, and the heavier its rains will be.

Plus, planetwide atmospheric warming is expected to significantly slow down certain Atlantic wind currents over the next century, giving future storms more time to gather water and energy over the ocean before making landfall. 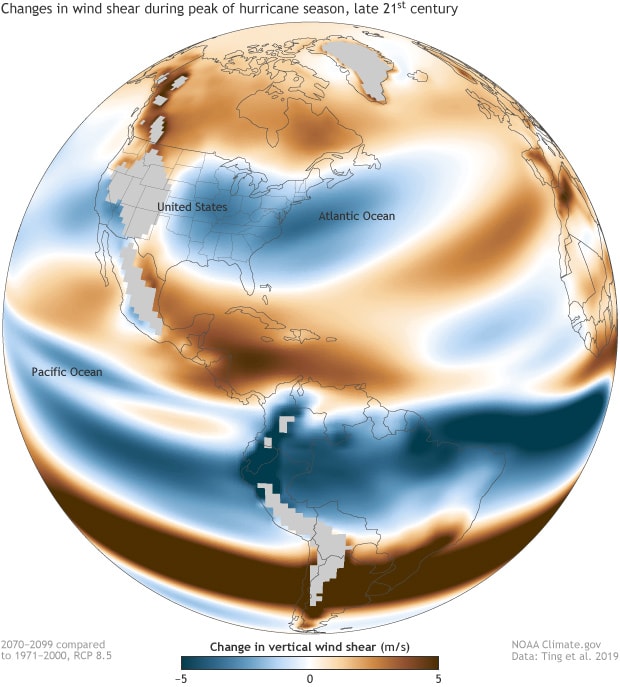 As with many other climate change processes, scientists say this intensification of U.S. hurricane impacts is already underway. In fact, they say the most destructive storm in recent memory, Hurricane Katrina, was a prime example.

A 2013 study published in the journal Climatic Change found that Katrina’s storm surge would have been as much as 60% lower if it had occurred under the temperature and sea level conditions of 1900. The authors concluded that its impact on the Gulf Coast would have been far less severe had it not been enlarged by abnormally warm air and high seas.

So if more Katrina-sized storms are headed to the eastern U.S., it stands to reason that some of the most immediate beneficiaries will be engineering firms that received contracts during the recovery from Katrina.

As it happens, two publicly traded companies stand out in this regard: Fluor (NYSE: FLR) and KBR (NYSE: KBR).

Fluor is a multinational engineering and construction firm based in Texas that received large Federal Emergency Management Agency (FEMA) contracts in the aftermath of Katrina and subsequent storms.

In early 2006, it won four deals worth a total of about $400 million to build trailers for displaced Gulf Coast businesses. It has since won similar FEMA contracts in the aftermath of the 2015 floods in Texas.

KBR (formerly Kellogg Brown & Root) is an engineering and facilities management firm also based in Texas that was spun off from Halliburton (NYSE: HAL) in 2007.

In the mid-2000s, KBR, then a Halliburton subsidiary, received several Navy contracts worth a total of $229 million to repair hurricane-damaged facilities. It has won several comparably sized emergency management contracts in the years since.

In the year after Hurricane Katrina, both Fluor and KBR’s then-parent Halliburton outperformed the S&P 500 by double-digit margins. The bleak implication is that an increase in such severe hurricanes may be good for the stock performance of the two firms in the years ahead.

Climate change is expected to bring much more rain to some regions, like the U.S. Atlantic coast, through changes in storm dynamics. But it’s also expected to starve other regions of badly needed rain, making Western wildfires bigger and more numerous.

U.S. Department of Agriculture projections show that an average annual 1°C global temperature increase would increase the median burned area in the U.S. West each year by as much as 600% in some types of forests.

Fires in a variety of different ecoregions have already been trending upward. 2020 was the worst Western fire season in U.S. history, and the number of blazes has been rising visibly since the 1980s… 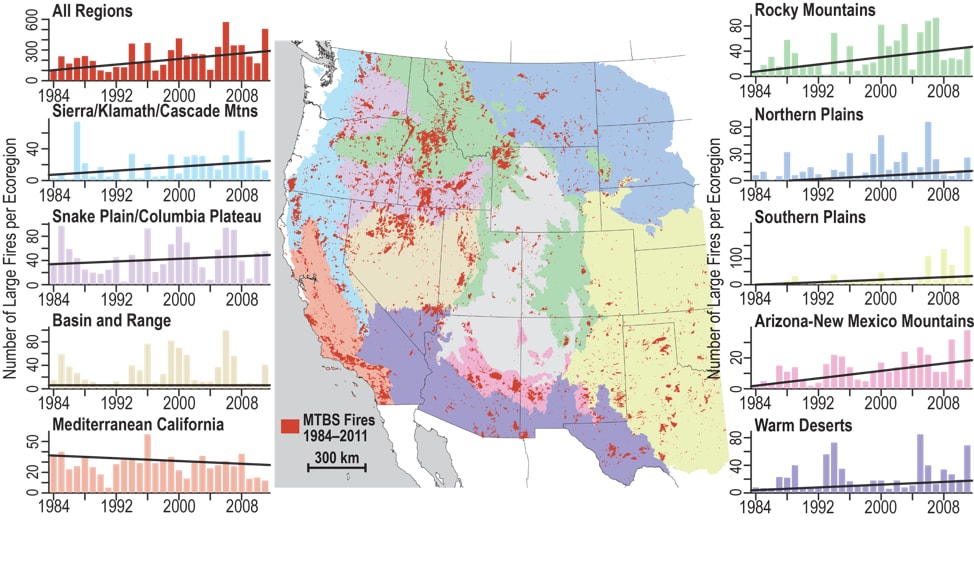 With this in mind, it’s no wonder that research firm MarketsandMarkets expects the fire protection system market to grow at a compound annual growth rate (CAGR) of 7.1% through 2025, reaching a value of $95.4 billion by that year. And within that market, two publicly traded companies stand out: Honeywell (NASDAQ: HON) and Johnson Controls (NYSE: JCI).

Johnson Controls is a diversified building maintenance, equipment manufacturing, and engineering firm headquartered in Ireland. It’s the largest fire protection firm in the world and has already won multiple contracts with local governments in the Western U.S. to provide municipal fire protection services, including a 2019 deal with the city of Costa Mesa, California.

Honeywell, meanwhile, is an engineering and manufacturing firm based in North Carolina and another one of the largest fire protection firms in the world. It too has extensive experience winning public-sector fire protection contracts along the vulnerable Pacific coast, including a 2011 upgrade of fire systems for the Mountain View Los Altos Union High School District in California.

Over the course of 2020 — again, the worst year for Western U.S. wildfires on record — both Honeywell and Johnson Controls outperformed the S&P 500. The depressing reality is that a climate-related uptick in wildfires may be good for shareholders of these companies.

Resilient Investing With a Conscience

Several companies in the watch list above, however, come with an important caveat for green-minded investors: They’re not environmentally sustainable.

If you dig into the non-emergency-response operations of these companies, you’ll find that many of them have pretty large carbon footprints. Johnson Controls also makes HVAC systems, which are a huge contributor to the carbon footprint of large buildings and cities.

In brief, the resilience industry doesn’t necessarily have the same kind of “conscience” that the sustainability industry does. It doesn’t concern itself with saving the world — only with cleaning up its messes.

Investors who are looking to make the world a better place by mitigating the worst effects of climate change, not just withstanding them, should check out Green Chip Stocks. Editor Jeff Siegel’s portfolio is currently up more than 50% on gains from a series of smartly chosen sustainable companies. Click here to learn more.