You’d be surprised how many people ask me what the price of oil will be in a year.

What’s more interesting is the look on their faces when I tell them what it would cost them, right down to the penny.

If you wanted to buy a barrel of oil right now and take delivery at some point in October of 2020, it would cost you exactly $51.46 per barrel as I write this.

No, I’m not reading any tea leaves, nor am I scouring over some obscure quatrains written by Nostradamus in the 16th century.

It’s simply the way the futures market works... with a few caveats, naturally. You wouldn’t just be buying a single barrel of oil, since the contract would be for 1,000 barrels of West Texas Intermediate (WTI).

Now, asking which direction oil prices will head over the next year — that’s a different story.

Which way will oil prices go?

According to the EIA’s Short-Term Energy Outlook, WTI prices will average $54.43 per barrel in 2020.

Although we would be in a better spot than we were in 2017, it would mark the second consecutive year-over-year drop in oil prices. 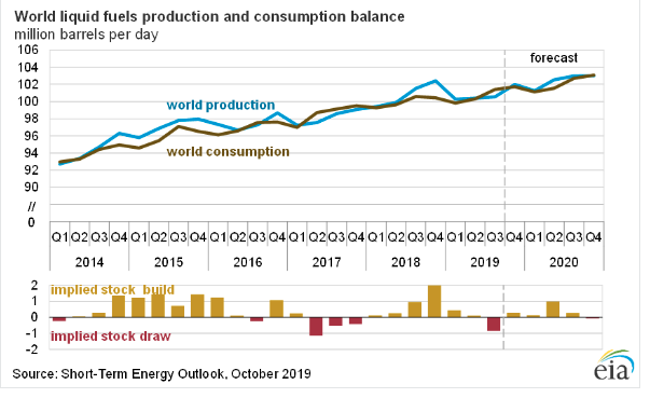 As you can see, the EIA is expecting the market to tighten heading into 2020, followed by downward pressure on prices during the first half of 2020 as global inventories rise starting in the second quarter.

That would make it the weakest year for demand growth since 2016.

And yet there’s one thing we can’t ignore: The world’s thirst for oil is reaching incredibly high levels.

I think both of their projections are forgetting something.

Look, geopolitical volatility in the Middle East is certainly nothing new to us.

The Saudis just shrugged off an unprecedented attack on their oil facilities that knocked out HALF of their output, and it failed to really move the dial on prices.

Imagine what it would take to push crude to $100 per barrel.

It may not be an attack at all, actually.

All it could take is a slowdown in U.S. tight oil.

I’m not talking about a natural peak in production, mind you, but rather a slowdown in drilling that will ultimately lead to less U.S. crude on the market.

In the latest Baker Hughes rig count, it showed that there are 207 fewer rigs drilling in the United States than there were a year ago — more than half of that loss was seen in Texas.

And even though we aren’t expecting crude prices to spike in 2020 without some horrific catalyst in the Middle East, that doesn’t mean investors need to go empty-handed in the oil sector.

You just need to know where to look.

So crude prices aren’t going to overwhelm anyone, at least not in the short term.

Not with 12.6 million barrels of U.S. crude oil flowing out of the ground right now.

But that doesn’t mean there isn’t an opportunity for investors.

I’ll show you one to keep an eye on right now.

For months, we’ve seen Iran play a cat-and-mouse game against the world by seizing several oil tankers this year. It had gotten to the point that the British navy had to start escorting UK-flagged ships passing through the Strait of Hormuz.

And it’s one of a number of reasons the tanker market has been so strong lately.

Daily rates for VLCCs (very large crude carriers) heading from the Persian Gulf to China have exploded roughly 90% higher during the first week of October. Suezmax rates more than doubled.

Now couple that geopolitical chaos with the fact that President Trump slapped sanctions on China shipping companies, and you have a recipe for an extraordinarily strong tanker market.

When traders stopped booking supertankers operated by COSCO, which accounts for about 3% of the VLCC market, it caused immense pressure on tanker rates. Remember that this is on top of the more than 200 tankers being avoided for carrying Venezuelan crude oil.

Investors like us who had been patiently waiting for the tanker market to gain strength were rewarded with stocks like Nordic American Tankers, which surged 80% in just two weeks.

This won’t be an overnight affair.

Still looking for a winner over the short term in the oil market?

Unless, of course, you think the tensions in the Middle East will subside anytime soon, or Trump will decide to let China off the hook and buy more Iranian crude.