Crude by rail has become a dangerous and corrupt enterprise, but Bakken master limited partnerships are changing this... every day.

When we talk about the railroad business, what we're really talking about is the coal business.

Sure, you may take the train to work or as a cheap alternative to air travel, but railroads are mainly commercial vessels, meant to ship goods from one market to another.

And, historically, coal is king of the rails. In fact, last year, more than 4 million carloads of it were shipped throughout the United States.

Even though many in government and the media will claim that there is a 'war on coal' happening, you don't see it in the stats, at least not yet anyway.

However one telling piece of information in the chart above is that coal, although the biggest commodity shipped by rail, only saw shipments grow a minuscule 0.3% for the same period that year.

Also notice that, at the same time, petroleum and petroleum products like diesel and gasoline saw shipments grow 13%.

So while coal is still king, take note that crude oil is taking over the rails, especially in the North and Midwest.

Here's a brief explanation as to why this is happening, and how you can profit...

In April 2014, North Dakota's oil production breached the 1 million barrel per day benchmark for the first time. By 2015, that had grown to more than 1.2 million barrels per day! 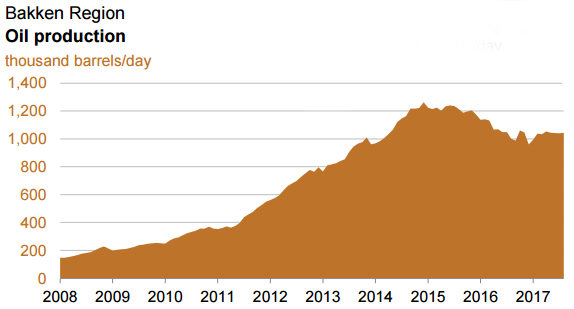 The oil rout of the last few years brought production back down from that peak, but the Bakken shale's dominance in the oil industry is still going strong.

Yet while the state climbed the economic ladder thanks to the Bakken, what was once the biggest industry in North Dakota was left behind.

According to a study by North Dakota State University, farmers in the state lost millions in profit over the last few years, and will lose even more if nothing changes.

You may be wondering how more oil production hurts farmers. Well, a closer examination of the situation in North Dakota shows that the two industries fight each other on a daily basis.

But their relationship offers us a way to build a valuable position in the energy sector.

The faltering agriculture revenues in North Dakota stem from a single culprit: railroads.

In September 2014, the Surface Transportation Board in North Dakota held a hearing in Fargo where senators, state legislators, and Governor Jack Dalrymple implored railway operators to ship grain instead of oil.

The Canadian Pacific Railway and BNSF railroad control most of the trains that transport Bakken oil, and they had been moving a lot more crude than crops.

Today, the same is true, but for different reasons.

Back then, the argument was that while grain produced before the hearing rotted in storage tanks, railway operators blamed the cold winter for the lack of agricultural shipments.

However, this argument was flimsy at best...

Even if the unusually harsh winter had caused trains to be less efficient, data leaked from the BNSF railroad showed that several oil trains carrying millions of gallons of crude had been traveling from the Williston Basin through the Midwest to ports on the East and West Coasts.

Today, the story is a little different.

Well, between 2014 and 2016, oil pipeline capacity in the state took off, leaving oil producers an alternative to the railways. However, with the onset of the shale boom, even the new pipeline capacity couldn't keep crude off the trains for long.

The biggest project in the state, the Dakota Access pipeline, faced many setbacks and forced producers scrambling for diminishing pipeline capacity to turn back to travel by rail. The pipeline officially began transporting oil in June, 2017, and will be able to transport as much as half of the state's oil to a facility in Illinois.

That is, as long as production levels stay where they are. Which is unlikely.

As output increases again, producers will be looking for more transportation capacity... and taking up room on the rails once more.

So, to me, it simply looks like oil producers are willing to pay more to ship their assets.

But the solution to overcrowded railroads already exists, and it offers investors a valuable and unique way to see gains in U.S. energy.

Part of the solution to traffic problems for rail companies is to make single shipments much larger so they can transport more goods in one go and free up more time for other products.

The only expense for this is in adding extra cars to trains.

This practice looks good for traffic problems until you factor in the that these super-massive oil transports have become rolling, thundering bombs that could derail and explode at any moment.

Between 2007 and 2014, there was a drastic increase in rail accidents involving crude oil, which peaked at 144 accidents in a single year! And was all because companies had been overloading shipments and increasing rail speeds to meet demand.

The worst of these came in July 2013, when a runaway train derailed and exploded in the Quebec town of Lac-Mégantic, killing 47 people and destroying the town's center.

There have also been notable accidents in Lynchburg, Virginia; Casselton, North Dakota; Aliceville, Alabama, and more across the U.S.

As more and more people realize the problems surrounding these massive crude oil trains, it's only a matter of time before the next wave of the U.S. oil boom takes over...

This next wave is new pipelines. Once these super-efficient and reliable transports catch up with oil transport demand, we will see fewer accidents and less traffic on the railroads.

Pipelines are so efficient because the business model is incredibly simple.

Once the pipeline is built, an operating company charges drillers or other companies that want to ship oil and gasoline through its pipes a fixed rate.

As throughput rises, so too do profits, and once the expenses of construction, maintenance, and payroll are met, the rest is gravy for the company and its investors.

Because of the reliable business model and cashflow of pipeline companies, many of them adopt a master limited partnership (MLP) structure.

If you aren't aware of MLPs here's a quick explanation...

An MLP is a company that derives 90% of its business from natural resources and avoids paying taxes if it distributes at least 90% of its profits to shareholders (much like a REIT). Because of this, these companies offer extremely high dividend yields for those who own shares. Sometimes these dividends are more than 15% per share, per year.

And since MLPs focus on energy, including pipelines, we are extremely excited about their inevitable growth over the next few years.

Conservative estimates suggest that pipeline capacity will almost double in the next few years, while other sources suggest even more growth.

This means that, while looking for lucrative investments, we absolutely cannot ignore pipeline MLPs. Especially those in North Dakota, where virtually no pipelines existed before Bakken production exploded, and where the bulk of inland supply is in desperate need of transport out to southern refineries and export terminals.

One of my favorite stocks in the area is Enbridge Energy Partners, L.P. (NYSE: EEP). This company has a long track record and experienced management as it is an offshoot of pipeline giant Enbridge Inc.

The company has advanced projects in North Dakota and will see more exuberance in its favor as investors see this trend continuing.

Since oil prices took their dive, the company is undervalued on the open market, so an investment is even more worthwhile at this point.

Remember too, that since Enbridge Energy Partners is an MLP it pays a high dividend (8.7% per share in this case).

So with oil's slow but sure recovery in mind, I suggest a modest dollar cost averaging strategy to watch your wealth grow as pipelines help ease pressure on railroad operators and families stricken by explosions.

In the meantime, keep your eye on our Energy and Capital daily newsletter, where our editors divulge some of the best MLPs, ETFs, options, and other lucrative energy investments available.