But before we get into the three stocks to buy for Lithium’s 4,000% rise, I wanted to tell you about our ‘backdoor’ lithium play.

I know I mentioned it the last time we spoke and I wanted to address that before moving into the ‘meat and potatoes.’

This company and its "Infinite Lithium" technology, are about to blow all of the gains made from the normal lithium plays out of the water.

This stock is unlike ANY other in the lithium space. It’s groundbreaking in every sense of the word.

It could help free America from its dependence on countries like China for its lithium supply.

And it could catapult your life and your wealth to an entirely new level.

Our resident Lithium expert Keith Kohl has vetted the three lithium companies highlighted below, but he won’t shut up about his “Infinite Lithium” play. He’s explained the premise to us and other readers of Energy and Capital because he truly believes this is the answer for the current supply/demand crisis facing the lithium market.

While the three lithium plays inside our report “The Top 3 Stocks to Play for Lithium’s 4,000% Rise” are yours completely free, Keith has reserved his backdoor “Infinite Lithium” play for his premium subscribers at Energy Investor.

Goldman Sachs is calling it “the new gasoline.”

The Economist has called it “the world's hottest commodity.”

Energy experts have dubbed it the "oil" of the future.

I'm talking about lithium: a one-of-a-kind element used in consumer electronics, computers, and communication — think everything from cellphones all the way up to electric vehicles... basically anything necessitating a compact, rechargeable power source.

Demand is going to soar in the coming years. The main driver for this explosive lithium growth is the rechargeable battery sector.

Rising prices of lithium, cobalt, and carbon are not a bubble. They are underpinned both by rapid growth in electric vehicle sales and tight supplies.

Electric vehicles (EVs) are expected to make up 35% of the automotive market by 2040. Just as importantly, Elon Musk’s prediction that long-range EVs would be available for less than $30,000 by 2023 came true - two years early. Several long-range models from Audi, Nissan and Hyundai already cost less than $30,000 after tax credits.

Again, this all goes back to batteries, which have seen a huge reduction in cost that will continue.

Estimates indicate that the cost of “fueling” electric vehicles is a fraction of the cost for conventional gasoline vehicles. The cost to charge an EV is around $0.14 per kilowatt-hour, while a gallon of gas currently averages $3.38.

The average lifetime maintenance cost of an EV is roughly $4,600, while the average gas car costs twice as much - $9,200 on average - in mechanic bills over its lifetime. .

In addition to getting cheaper, these batteries are also getting more efficient. New and second-generation plug-in models can go farther on a single charge than their predecessors. And this is key.

The Tesla Model S has a 400-mile range. Audi's Q4 e-tron is up near 300 miles of range and is already considered the cheapest electric Audi, starting at around $45,000.

These technological advancements have accelerated sales. Furthermore, they’ve demonstrated a significant competitive advantage for car companies which master them. It’s a race to build the best battery. The manufacturer with the most efficient, cost-effective and potent battery wins.

Furthermore, such batteries are essential for renewable energy sources, specifically wind and solar. The need to store power for prolonged periods requires the kind of industrial-grade capacity that only advanced lithium batteries can deliver. That's added another nice tailwind to lithium demand.

Data compiled by Allied Market Research suggests that the global lithium-ion battery market is expected to grow at a compound annual growth rate of 18% to reach $129.3 billion by 2027. 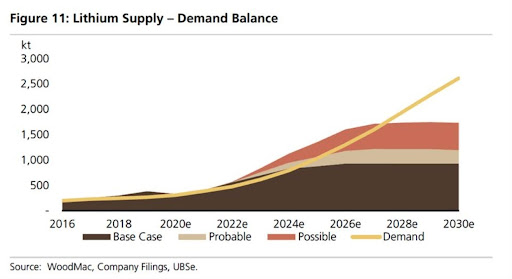 So how can investors play it?

Albemarle owns and operates a mine at the Salar de Atacama project in Chile and the Silver Peak mine in Clayton Valley, Nevada. Albemarle is a $14.33 billion market cap diversified chemical corporation and is not a pure play on lithium production, though it is positioning itself as the face of the lithium mining industry.

Livent, on the other hand, is a pure lithium play - its business is split between lithium brine production from the Salar del Hombre Muerto in Argentina, and the processing of that brine into various lithium-based products.

Ganfeng is also a pure play - and China’s largest lithium producer. It has mining operations in Australia, Argentina, Mexico and China - and recently inked a 3-year supply contract with Tesla. As you can see from the chart below, Ganfreng had an astronomical 2021.

These stocks have done rather well recently; each of them is outperforming the S&P (the thinner blue line on the bottom in the chart below) 500  this year. (Albermarle is represented by purple, Livent by Magenta, and Gangfeng by the gold line below.)

Many Australian miners are benefiting as well, because electric car demand in China is absolutely booming. Australia is the world's top lithium producer and home to the world's two biggest lithium mines.

Orocobre (OTC: OROCF)is the largest lithium mining company in Australia by market capitalization, and sources lithium from the Olaroz Lithium Facility in northern Argentina. Keith kohl managed to recommend Orocobre to his Energy Investors for a 420%+ gain (and that’s NOT the “Infinite Lithium” stock he won’t stop shouting from the rooftops about.)

Pilbara Minerals (OTC: PILBF) developed the Pilgangoora project in the iron ore-rich Pilbara region of Western Australia. The lithium-tantalum project is 100% owned by Pilbara and is one of the largest hard-rock lithium deposits in the world.

The Pilgangoora project is currently in Stage 2 of a three-stage expansion process for the mine. Company reports have stated that it is waiting until “such time that market demand and/or participation of a partner at Pilgangoora is sufficient to justify its development.”

Both stocks have posted impressive performances this year…

As lithium demand increases over the years, Pilbara and Orocobre’s stock prices should follow suit.

The fund is a great way to track the overall lithium market while investment and demand grow over the next few years into unparalleled territory in the coming decades.

Included in the holdings of the ETF are miners, chemical companies, battery manufacturers, and other industrial companies.

By diversifying the exposure to lithium, the Global X Lithium & Battery Tech ETF provides investors with less risk and the potential for long-term reward.

A New Technology is About to Make Lithium Mining Obsolete?

In one of the world’s most advanced labs a group of engineers has literally "cracked the code" to the clean energy revolution.

I wouldn’t be surprised if they were awarded the Nobel Prize for solving the world’s energy crisis.

Because they’ve developed a technology capable of generating an infinite supply of super-rich lithium right here in America... WITHOUT any mining.

According to one of the world’s leading sustainable energy information providers, "The technology can produce battery-grade lithium."

Better still, the entire production process is safe too, unlike traditional lithium mining.

Mining lithium is an incredibly energy-intensive process, one that uses a slew of toxic chemicals.

And it wreaks havoc on local ecosystems.

Mining activity scars the landscape... It harms and pollutes the soil... And it contaminates the water supply and local streams.

“This isn’t a green solution — it’s not a solution at all,” says Guillermo Gonzalez, a lithium battery expert from the University of Chile.

This company’s lithium production process uses a combination of safe, nontoxic liquid chemicals inside a lab.

It’s 100% emission-free, there is NO risk of fire or explosion, and it doesn’t even waste any water.

So forget about mining lithium in far-flung, unstable political regions like South America...

Forget about China, which controls roughly 70% of the world’s lithium supply...

And forget about jump-starting America’s own domestic lithium mining operations...

Because they're all about to become things of the past...

And it’s all thanks to this firm’s incredible "infinite lithium" technology.

And with global demand for lithium absolutely exploding, I predict that its share price could soar 10, 20, even 30 times higher from here.

Get the full story before it's splashed all over the mainstream media.