This is a collage of seven headlines from the last few months. Each is from a different publication, and each is about a different kind of business.

But you can see a commonality between each of these stories… 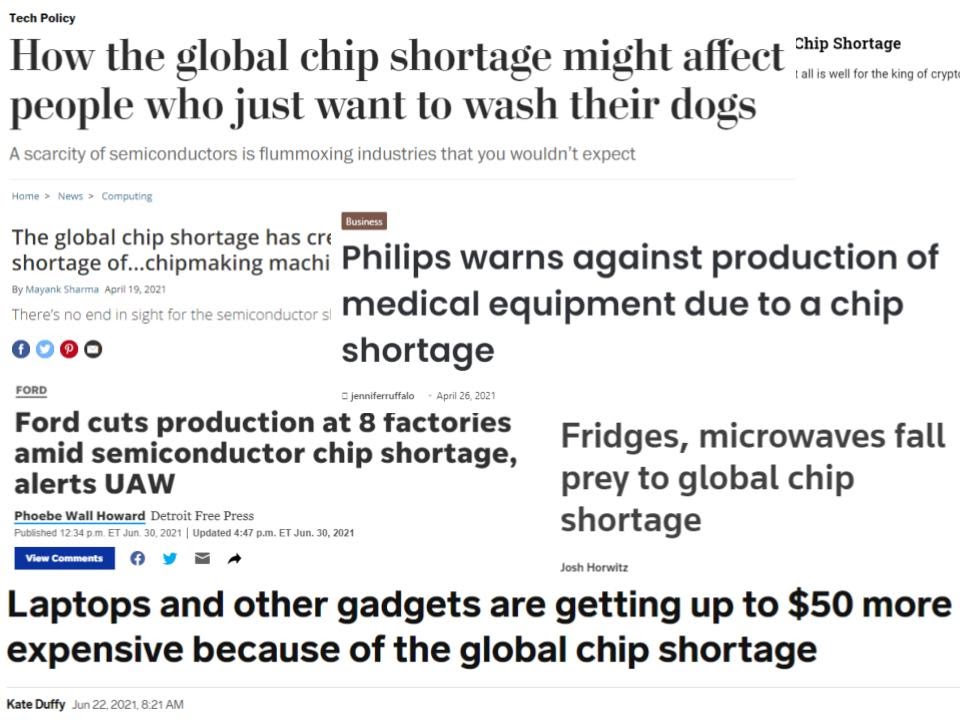 A wide swath of industries, from consumer electronics to automobiles to medical imaging to veterinary services, are experiencing shortages or rapid price increases because of a severe global drought of semiconductor chips that started during the COVID-19 pandemic.

The chip shortage has only worsened as the world has emerged from the pandemic — and it’s one of the biggest drivers of the sudden spike in inflation.

In mid-July, the Bureau of Labor Statistics (BLS) reported that the consumer price index (CPI) had jumped 5.4% from a year earlier — the largest increase since 2008. Much of that increase, however, was driven by products hit hard by the semiconductor shortage, like appliances (up 5.8%), watches (up 11.2%), used cars and trucks (up 45.2%), and rental cars (up 87.7%).

In sum, this semiconductor chip shortage is threatening to bring the global consumer economy to a grinding halt — and a handful of fabrication firms are stepping up to solve it.

Investors have an opportunity to earn big profits from these firms — but before we discuss them, we should probably go over what a semiconductor chip actually is and why semiconductor fabrication activity has been so depressed since the early days of the pandemic.

Well… yes and no.

When we hear the word “semiconductor” in an American context, we tend to think of California-based semiconductor manufacturing firms like Intel (NASDAQ: INTC), Broadcom (NASDAQ: AVGO), and Qualcomm (NASDAQ: QCOM).

The mainstream media have done a poor job of explaining the difference between semiconductor manufacturers like them and the semiconductor fabricators (or “fabs”) that are responsible for the global chip shortage. This researcher suspects that many tech and finance reporters don’t understand the distinction themselves.

The American companies we confusingly call “semiconductor manufacturers” actually produce and sell computer parts like processors and graphics cards using semiconductor chips. Most of them, including Broadcom and Qualcomm, outsource the fabrication of those chips to a small handful of semiconductor fab firms located mostly in Asia. 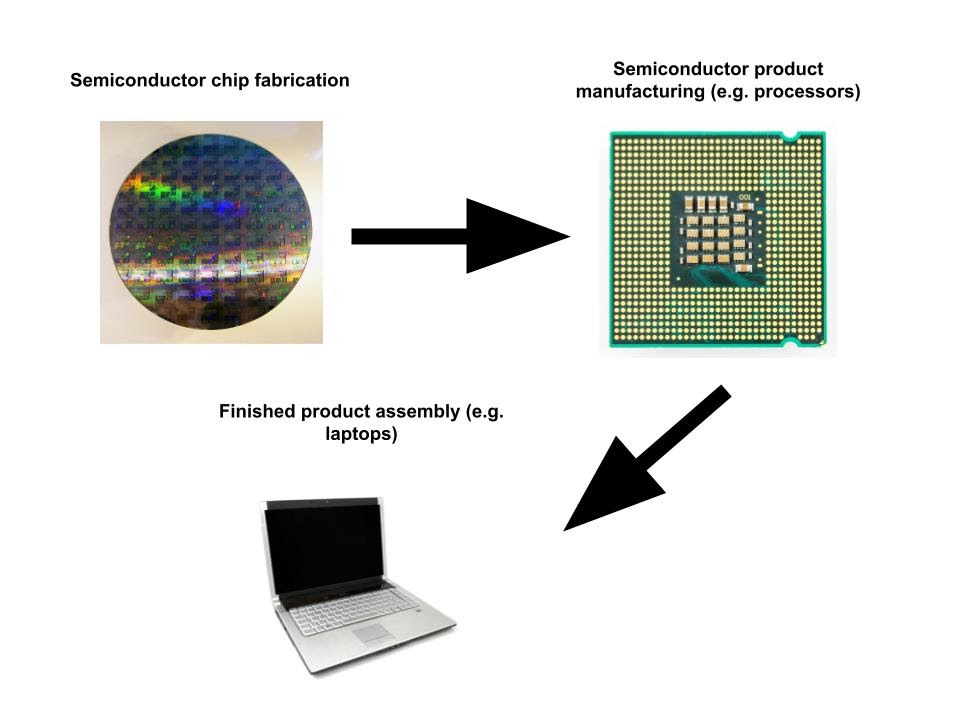 (Intel is a niche case; it is best known as a manufacturer but also has its own in-house fab facilities and has recently invested in expanding those fab facilities so it can produce chips for other firms. More on that in a moment.)

And when we say most manufacturers outsource fabrication to a small handful of Asian fab firms, we do mean a small handful. Just nine firms accounted for 92% of the global semiconductor fab market in the first quarter of 2021, and most are located in Taiwan.

The self-governing island accounts for more than 60% of global fab revenues — and therein lies part of the problem.

To make a long story short, Taiwan is still largely in the grips of the COVID-19 pandemic because it has struggled to access and distribute vaccines.

Less than 1% of Taiwan’s population is fully vaccinated, as it has been trying unsuccessfully for months to purchase vaccine doses from Pfizer and BioNTech. It blames the mainland Chinese government — which claims the self-governing island as its own territory — for interfering with a deal (accusations China denies). 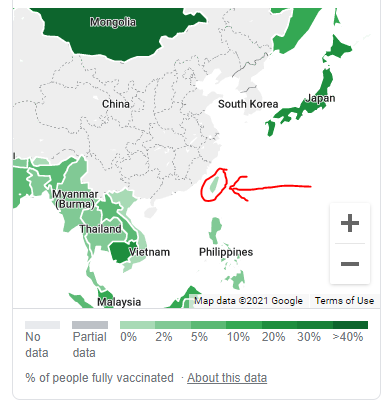 Taiwan’s vaccination issues are such a big problem for the global electronics industry that vaccine manufacturers have made special arrangements to try to get its factories up and running again.

As a result of its lack of immunity, Taiwan is currently on Level 3 of its COVID-19 alert system — a level that restricts fab operations — and is inching toward Level 4, which could shut them down entirely. TSMC has quarantined dozens of workers in recent months after a string of infections in its facilities.

The pandemic has also caused a lasting shortage of helium, a key input in the semiconductor fab process. Fabs use the gas’ chemical nonreactivity and strong coolant properties to prevent unwanted reactions during the more delicate parts of chip synthesis. It’s mostly extracted as a byproduct of oil and gas drilling, which has been severely depressed during the pandemic.

So between a shortage of vaccinated workers and a shortage of crucial fab inputs, semiconductor fabs are still desperately struggling to meet demand — and could continue to do so for some time. Back in June, Singapore-based manufacturer Flex projected that the chip shortage would last well into 2022.

In the meantime, there is a small set of publicly traded semiconductor fabs that are uniquely well-positioned to respond to the shortage and have made large investments in expanding their fab capacities recently…

Founded in 1987 and based in Hsinchu, Taiwan, TSMC is the world’s most valuable semiconductor company and the largest independent fab by revenue. (Yes, the name is at odds with domestic semiconductor-industry terminology. TSMC is not actually what Americans call a semiconductor manufacturer but rather a semiconductor fab.)

As we’ve discussed previously, TSMC’s COVID-19-related operational issues have been a big part of the problem with the world’s semiconductor chip supply. But TSMC is big enough that it will also inevitably be part of the solution.

The world simply has zero chance of meeting the demand for semiconductor chips without TSMC’s fab facilities — and to that end, TSMC is expanding those facilities. It has pledged to invest a whopping $100 billion over the next three years on expansions to its productive capacity. (The fact that the company can find $100 billion to invest in internal improvements should tell you something about its scale and dominance.)

In the meantime, TSMC has done an excellent job of maintaining top-line and bottom-line growth, even as it fights to keep its factories operational. In the most recent quarter, earnings rose 11.2% year over year on a 19.8% increase in revenue.

The firm is profitable on an earnings basis, has a low debt-to-equity ratio of 20.74%, and pays a 4.3% dividend at a 48.6% payout ratio. Shares have pulled back in the last few months amid news of production problems, giving investors a great entry point.

In a sense, TSMC is too big to fail, and to that end it deserves inclusion in any good selection of semiconductor fab stocks. But the current crisis also demonstrates that TSMC can’t meet the current supply deficit alone. And with that in mind, it’s also worth investing in a newcomer to the outsourced fab sub-industry…

Founded in 1968 and based in Santa Clara, California, Intel is the largest semiconductor manufacturer (in the American sense) in the world by revenue. Its main business consists of selling processors, graphics cards, integrated circuits, memory devices, and other computer parts to electronics manufacturers and consumers.

Intel also has its own fab facilities, but historically it has used those facilities exclusively to make chips for its own products, like the x86 microprocessors found in most personal computers. As a result, it usually isn’t mentioned in analyses of the fab market. But that’s likely to change soon.

Earlier this year, CEO Pat Gelsinger pledged more than $20 billion in investments to expand its U.S. fab facilities with the goal of becoming a fab that can make outsourced chips for other companies (like TSMC does).

And in mid-July, The Wall Street Journal reported that Intel was in talks to acquire GlobalFoundries, a top-10 fab that controls 7% of the global outsourced fab market and is the only major outsourcing fab located outside of Asia.

Those moves are still pending, but in the meantime, Intel has maintained an impressive degree of profitability through the pandemic. It currently has a trailing price-to-earnings (P/E) ratio of just 12.35 — far lower than most tech stocks — and a comparably low forward P/E of 12.55.

It also has a healthy 45% debt-to-equity ratio and pays a generous 2.5% dividend at a 30.1% payout ratio. Like TSMC, Intel shares have pulled back since the spring, creating a great buying opportunity.

This report has now profiled the main incumbent in the semiconductor fab industry — and perhaps its most important upstart. But to get a more complete cross section of the industry, we should include a company that's higher on the supply chain than both firms…

Founded in 1984 and based in Veldhoven in the Netherlands, ASML Holding is the world’s largest supplier of photolithography systems for the semiconductor fab industry.

Its machines allow fabs to print intricate patterns made out of conductive materials onto silicon wafers, which form tiny, semiconductive electronic circuits on the surface of those wafers (hence “semiconductor chip.”)

Even if TSMC, Intel, and every other big fab went out of business tomorrow, the companies that would replace them would still likely need to buy ASML photolithography machines.

As you can imagine, ASML has grown its top and bottom lines like gangbusters during the chip shortage. In its most recent quarter, its earnings soared 240.9% on a 78.8% increase in revenue.

The company is profitable on an earnings basis, has a low debt-to-equity ratio of 34%, and pays a 0.4% dividend at a 23.6% payout ratio. Shares have raced upward this year, but they still have plenty of room to run.

These three companies should give investors a broad degree of exposure to the semiconductor fab industry as it works through a historic shortage that could continue through next year.

To continue profiting from the changing needs of the global tech industry, however, you need to either spend a lot of time reading up on industry trends or follow the advice of an expert who does.

Technology and Opportunity editor Keith Kohl is one such expert, and he has led his subscribers to big gains on semiconductor stocks in recent years. Click here to learn more.