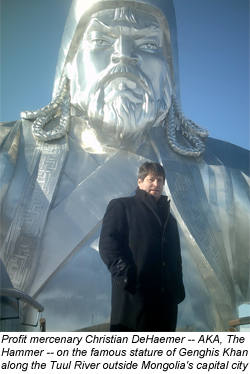 Hi, my name is Chris DeHaemer.

Since 1996, I’ve shown readers like you the fastest, safest ways to make money and grow their retirement savings.

I’ve traveled the world to find the kinds of life-changing profit opportunities I’m revealing to you today.

I was in Cuba researching investment ideas well before the travel embargo was lifted.

I’ve been all over the world, from the Middle East to Mongolia and back, just to get the first look at energy plays.

I don’t get my information from hanging out at dinner parties with Wall Street hucksters or relying on the talking heads on CNBC.

I get it from rolling up my sleeves and getting dirty.

I’m not some guy who just looks at numbers and figures behind a computer screen like most “analysts.”

I've flown all over the world to investigate ideas for my readers.

Going down into open pits... or riding with miners deep underground...

You name the place, I’ve probably been there.

That on-the-ground action handed my readers a huge win in 2009.

My research showed that oil prices would surge.

Any Wall Street suit could have, and would have, told people to buy Exxon or other blue-chip oil stocks.

The stock would have gone up a little... the little guy would have made pennies...

And the fat cats on Wall Street would have made themselves a fortune and popped bottles of champagne...

Not from the stock jump, but from the fees they take from recommending obvious plays to lots of customers.

But I don’t go for the obvious play in the hopes you can make pennies.

I want to find the story no one else is talking about...

And make you a potential fortune.

So back in 2009, I made calls to my connections so I could find the best way to profit.

I cashed in all my favors to gain access to the information usually reserved for insiders.

I crawled around on my hands and knees looking for the best plays with the most potential profit.

After all that research...

Then I met with the big players, interviewed the owners, had beers with workers after their shifts...

I analyzed financial reports and internal documents and interrogated the management teams...

And after all this work, I whittled the original list of 50 down to just five companies.

Any reader who took my advice booked triple-digit profits on every single one of them.

Like the 759% gain on Petro Matad (PRTDF), a Mongolian company most people had never heard of.

Or the 411% stock explosion on Africa Oil, at a time when most stock pickers were staying away from it.

Readers snagged another 381% win with Africa Oil the second time I recommended it.

I told readers to pick up Cove Energy... have you ever heard of it?

It traded under the stock ticker COV.

I was also Johnny-on-the-spot with cryptocurrencies — making my readers 2,528% and 1,040.32% in a year and a half using a time-tested exit strategy to make sure we got out with the most profits.

But you shouldn’t just take my word for it.

Take a look at just a few of the testimonials I’ve received from my readers:

"I’ve seen Chris in action before and he knows this business inside and out. It’s hard to go wrong with his picks."

Cameron P. from Kansas wrote in to tell me:

And Michael F. from Pittsburgh said:

Those testimonials mean the world to me.

Join me and I’ll tell you what happens next each week in Energy and Capital and through one of the world's greatest financial newsletter, Christian DeHaemer’s Bull and Bust Report.

Breaking up Is Easy

Here's the List of Winners and Losers, Great Calls, and Flameouts

How to Cash in on This POS Market

Oil Sells off on Demand Weakness

WSJ Gets It Wrong, OPEC Will Cut

How to Make Money From an Oil Boom

Know When to Bet Big

Here Is Why You Should Buy Crypto Now

It's No Different This Time Either...

Posted on September 20, 2022
Hydrogen Fuel Cells: The Downfall of Tesla?
Lithium has been the front-runner in the battery technology market for years, but that is all coming to an end. Elon Musk is against them, but Jeff Bezos is investing heavily in them. Hydrogen Fuel Cells will turn the battery market upside down and we've discovered a tiny company that is going to make it happen.