You Never Hear About These Profitable Oil Stocks

You’ve heard of a pick-and-shovel play before.

The phrase goes back to the days of the California gold rush, when many of the profits being made weren’t from those actively looking for gold. Instead, vast fortunes were built selling picks and shovels to miners looking to strike it rich.

I also think it’s safe to say that most of the members of our investment community have taken advantage of these kinds of plays in the past.

And now it’s time to revisit this little talked-about class of oil stocks.

If you remember, I mentioned last week that Halliburton was one of the whales in the sector that commands a market cap of around $42 billion and is arguably one of the most well-known service companies on the planet.

But let’s take a step back from that and look at what a true pick-and-shovel stock is during an oil boom.

Inside, it projected that oil production from seven prominent tight oil regions in the U.S. will average 7.3 million barrels per day.

Let that sink in for a minute.

Assuming those estimates turn out to be accurate, that means fully two-thirds of our oil production comes from tight oil plays!

Of course, you know just as well as I do that our success in these tight oil formations is due to the shale pioneers like George Mitchell. He was the one who combined horizontal drilling with hydraulic fracturing techniques and cracked the shale code that led to a generation oil boom.

But we’re not looking to play the drillers, remember?

We want to find those hidden gems in the oil sector that are milking those E&P companies for all their worth during a period of high oil prices.

And our interest today is in the latter half of that shale formula I just told you about.

It goes by many names...

Let me be blunt: There IS NO tight oil production without it!

The process alone involves blasting the tight formations underground with sand and fluid in order to create fissures in the rock so that the oil and natural gas can flow more freely.

There’s simply no way around it, dear reader.

And we’re talking about a lot of sand...

This year alone, demand for frac sand is projected to top 100 million tons. 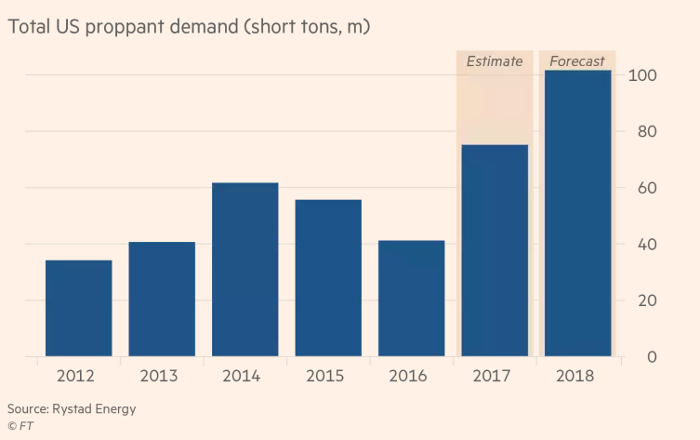 And they’re going to need to buy it from someone.

Everyone makes money in an oil boom.

Some simply make more than others.

So when 66% of our domestic oil production is entirely dependent on U.S. oil companies having a strong supply of quality frac sand, you can understand why this might be worth a little of your time to check out.

Your due diligence on players like Hi-Crush Partners (NYSE: HCLP) may pay off in spades as oil prices make another run to $80 per barrel.

The company controls mines in both Wisconsin and West Texas. Its Kermit facility in Texas has an annual production capacity of 3 million tons of sand.

Naturally, being so close to the Permian activity means Hi-Crush doesn’t have to waste any money loading its sand onto a costly railcar; the sand can just be loaded up directly onto the truck.

In fact, 80% of the drilling activity in the Permian Basin is within 50 miles of Hi-Crush’s facility.

So exactly what kind of growth are we talking about here?

For one thing, the company’s earnings are expected to surge more than 200% year-over-year in 2018, and the stock is still trading at around seven times its trailing earnings.

Again, it’s not hard to see this opportunity for what it is right now.

Frac sand remains one of the most important ingredients to the shale boom.

And it could prove to be a very strong performer for oil investors during this bull market.