How Wind Energy Leads to Yachts

Have you ever tried to argue a point that your counterpart simply doesn't understand?

This is how I often feel when arguing the bullish case for renewable energy. Though I must admit, it's getting easier.

If renewables can't make a dent, why are they being installed faster than any other energy technology, producing more energy now in the U.S. than even nuclear?

And why have billionaires like Bill Gates and Warren Buffett already invested willfully in clean technologies. . . and gone on to profit handsomely?

Quite frankly, if you haven't yet invested in renewable energy or at least come to the realization that it's worth pursuing, if only for the profits. . . you take your place among those to which I once referred as silly readers.

And I'll spend no further time trying to convince you.

But for those interested in making some of the easiest money around, I've got to tell you. . .

For starters, renewable energy captured more venture capital in the third quarter than both the biotech or software industries. This is the first time that's ever happened.

So the smart early money has already developed a healthy appetite for this sector. Venture capitalists poured $1.2 billion into cleantech last quarter, with the bulk of the money going to solar, biofuels, and smart grid technologies.

And the momentum doesn't stop there, it continues on down the chain. . . to public markets to steel in the ground. Every cleantech sector is reporting stellar growth.

The U.S. Geothermal Energy Association reported this month that their namesake sector has installed capacity of more than 3 GW. That will double in the next few years to more than 7.1 GW as new projects come online in California and Nevada.

And global solar capacity will do even better. With about 19.5 gigs already installed, capacity is slated to surge 1,037% in the next decade to well over 220 GW. . . led by the United States and China.

Solar stocks could see gains of equal percentage. Some — like the two I talked about last week — have surged more than 200% already this year. . . during a recession. . . and with every naysayer with a keyboard writing about a solar glut!

And the less-talked-about smart grid will be an $8 billion per year market, starting this year. Stocks in that sector have doubled this year, too.

All this bullishness ensues, and yet, what I really want to talk to you about is wind energy. Other cleantech sectors may be more explosive, but none can match wind's installed capacity, massive deals, and steady returns.

If solar is impressive with a projected 220 GW installed by 2019, wind capacity should be staggering. By that time, wind turbines will be churning out over 635 GW.

And the industry is so big now that single deals are often measured in billions. In fact, the wind industry has spawned its own lucrative sub-industries.

I've taken profits from companies like American Superconductor (NASDAQ: AMSC), which do well just providing niche parts for the wind industry. This particular company is up more than 100% in the past year, and rumors are circulating about a buyout by ABB, GE, or even Siemens.

And speaking of Siemens. . . the world's largest supplier of offshore wind turbines announced six orders this week totaling nearly $1 billion dollars. They will supply 250 turbines with a capacity of 565 MW to customers in the U.S. and Canada.

Duke Energy, one of the largest coal-burning utilities, is one of those customers — a fact that should bring further validity to this industry.

And all this without even mentioning China, the nation boasting this year's biggest wind market, with 10 new GW installed. But that's tiny compared to what the Middle Kingdom has planned. . .

They just began construction on the first of six 10 GW wind farms. That's right — each of those six farms will have a capacity equal to the total amount of wind power installed in China this year.

In Britain, an upcoming round of funding (of which Buffett is already involved), will fetch $160 billion to deploy 25 MW of offshore wind. Many more billions will be spent to get them to their 40 GW by 2020 offshore target.

Wind energy is everywhere. Turbines are going up faster than ever, creating fortunes and jobs along the way.

I even heard about a Vancouver-based yacht builder the other day that has laid off hundreds of people since the start of the Great Recession. Through a $1 million federal stimulus grant, the company has retooled to build components used in wind energy. . . and  will rehire 200 people.

And the wind success stories go on. . .

Especially for those that have invested in the sector. I already mentioned American Superconductor, but I've also told my readers to buy the First Trust Global Wind Energy ETF (NYSE: FAN). Look how they've performed over the past six months: 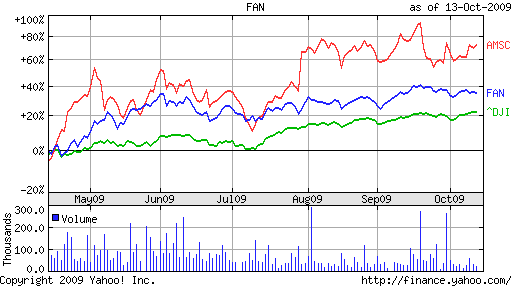 There's plenty of time to buy and hold that ETF to reap the benefits of wind growth in the coming years. In addition, I've found a few other wind stocks that I think will do very well as the number of billion-dollar turbine deals increases. You can read about those coming wind winners here.