Turning Our Back on OPEC

How could you not see it coming?

After all, we've been questioning OPEC's oil reserves for years. Whether they're breaking quotas, inflating numbers to suit their needs, or keeping a closed lid on their field data, you have to admit OPEC hasn't exactly been forthcoming to the public...

But what reason do they have to come clean?

OPEC members control about three-quarters of global reserves and pump out nearly 30 million barrels of oil every day — more than one-third of the world's total production.

According to the recent EIA's Short-Term Energy Outlook, OPEC surplus production is projected to remain above 4 million barrels per day during the next two years.

So what was all the excitement about?

Yesterday, the latest Wikileaks revelation indicated Saudi Arabia's oil reserves may have been inflated by about 40%.

Back in 2007, Abdallah al-Saif — Saudi Aramco's vice president for exploration at the time — told U.S. diplomats the country had approximately 716 billion barrels of oil, even mentioning that that number would increase to 900 billion barrels in total reserves within the next twenty years.

He also suggested roughly 51% of those reserves would be recoverable.

Now, before you jump off the deep end, remember that we're not talking about proven reserves — which, according to Saudi Aramco, stand around 260 billion barrels of oil, a number that has barely changed during the last two decades.

The cables came from the U.S. embassy and warned that Saudi numbers were overstated.

Sadad al-Husseini, a former Saudi Aramco bigwig, had said the number of total reserves were overstated by as much as 300 billion barrels. He went even further, believing the Saudis would be unable to reach their 12.5 million b/d production capacity by 2009, and that it would take a decade to reach that goal.

Whether or not the United States took Mr. al-Husseini's conflicting story to heart, one thing is clear: The U.S. is certainly importing less Saudi oil.

Last month, I showed you where we're looking to make up the difference.

The future of Saudi oil — which includes the decline of the soon-to-be world's largest wishing well, the mighty Ghawar oil field — is even more reason why the United States is looking north to our Canadian neighbors.

And those imports will inevitably rise; the EIA's report wasn't too optimistic towards domestic production...

New technological breakthroughs — much like the one my readers found in this tiny shale stock — are poised to revolutionize shale production.

Unfortunately, the bad news is right around the corner.

Alaskan production is expected to decline by 60,000 bbls/d this year and 20,000 bbls/d in 2012, thanks to maturing oil fields. Furthermore, production in the federal waters of the Gulf of Mexico falls by 250,000 bbls/d each year for two years.

But our shift from Saudi oil hasn't left them out in the cold...

China is more than happy to pick up the slack.

Not surprisingly, the Saudis changed their focus in 2010, shipping more oil to China than to the United States. That hasn't happened in nearly two decades.

Does this mean the Chinese aren't worried about the Saudis' exaggerated oil data?

The fact of the matter is it doesn't matter.

China has been on a seemingly endless energy buying spree as of late. In fact we know exactly how dedicated the Chinese have become to securing future energy security...

The country has shelled out nearly $40 billion to help develop Iran's oil and gas sector.

During 2010, China pumped more than $10 billion — about 35% of Brazil's total foreign direct investments — into Petrobras to help develop their offshore fields. 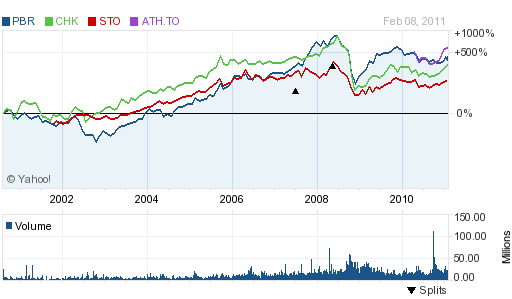 As you can see, we shouldn't be so quick to dismiss their investments — all of which have performed well for investors.

Next week, we'll take a closer look at one sector that China hasn't yet tapped, giving early investors an enormous buying opportunity.