Why BP's Nightmare Isn't Over Yet

This past week was interesting, to say the least...

For the first time since April, BP was putting out some good news with an announcement on Wednesday that the Macondo well had reached a static condition. In other words, the well pressure was under control and the drilling mud had done its job.

On Thursday, BP was given the green light to begin pumping cement into the well, which is part of the static kill procedure.

And this week saw even more good news for BP. According to the NOAA, approximately 50% of the oil spilled had degraded into tiny particles. Roughly 26% still remains as a thin layer on top of the water or as tar-balls, which either washed ashore or was buried in the sediment.

So we're in the clear, right?

Unfortunately, the nightmare isn't over yet — specifically for offshore drillers.

When the House of Representatives passed a vote to overhaul the offshore drilling system, part of that bill included removing the $75 million liability cap.

Although the bill has to pass through the Senate to become law, the news is certainly grim for smaller, offshore drillers that don't happen to have billions of dollars just lying around.

But the static kill news was good enough for the market. By mid-week, energy stocks across the board had moved higher. Also helping push oil prices higher recently has been the weakening dollar. 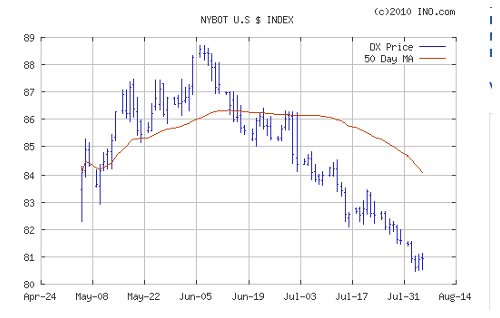 Oil prices rose above $83 per barrel for the first time since May, gaining more than 15% in the last four weeks.

But sadly, the great start this week had fizzled as it progressed — by Thursday, the market shifted its focus from BP's good news to signs of a slowing economy.

Stocks began to drop when the Department of Labor released their jobs report; the number of jobless claims rose 19,000 to 479,000 last week.

So much for the rally.

Before you get too stressed, remember there's always a way to profit in this market...

Here are a few of this week's top profit ideas:

The Fate of U.S. Oil Production: How to Profit from the Offshore Drilling Ban
In the wake of BP's debacle in the Gulf of Mexico, the fate of offshore drilling is under attack. The recent offshore drilling ban is further evidence that election-hungry politicians are going to milk the publicity for all its worth. But all is not lost for smart oil investors — and we'll give you the details on three American oil-drillers that are reaping the benefits.

Mongolia's Untapped Oil Fortune: The Last Place on Earth You Expected to See an Oil Gusher
Energy and Capital Publisher Brian Hicks uncovers the truth about Mongolia's $51 billion lost oil fortune, and shows you one tiny company that owns it all.

The Bullish Case for Energy Storage: 4 Reasons Energy Storage is the Next Major Bull
Editor Nick Hodge serves up the 4 biggest reasons to be bullish on energy storage.

How to Front-Run the Chinese Legally: Why You Should Buy Gold Before China
Publisher Brian Hicks brings readers Part 2 of his strategy for front-running the Chinese legally, this time by investing in gold.

Why are Blue Chips So Cheap?: Quality Stocks are Still Cheap
Wealth Daily Analyst Adam Sharp points out the difference — and the importance — between value stocks and value traps.

P.S. Although BP has cleared a major hurdle in this catastrophe, the coast isn't clear for offshore drillers. In fact the House of Representatives recently passed a vote to completely overhaul the offshore drilling system. Part of the bill eliminated the current $75 million cap on liability. But where many see crisis, we see opportunity...

You see, an uncertain future in offshore drilling is making certain onshore plays extremely profitable right now. In this report, I've highlighted three of my favorite oil stocks, including one that's up over 439% for my readers. Simply click here to learn about these investment opportunities.