Where is Crude Headed?

As I write this, oil has broken the $80-a-barrel mark.

This is the first time crude has traded below $80 since last October.

Many oil market observers are rejoicing, pronouncing "the era of high oil prices" over as new supply comes to the market from the Bakken and Eagle Ford. Some are even calling for oil to hit $40 a barrel.

And who can blame their enthusiasm?

This is a win-win for the economy and the consumer alike. Lower gasoline prices mean more cash available for discretionary spending!

Not so fast... Yes, lower oil prices are good for everyone (except drillers in shale oil), but it doesn’t mean they’re permanent.

In fact, one particular market action by the Chinese may predict where oil prices are headed in the future. According to a recent report by Bloomberg:

Taking advantage of lower oil prices, China is hoarding crude at the fastest rate since the Beijing Olympics four years ago as the slump in international prices prompts it to import unprecedented volumes even as refining slows.

The world's second-biggest oil consumer built up a surplus of about 90 million barrels of crude in the first five months of the year, government data show.

China, which imports more than half its crude, is constructing about 200 million barrels of storage capacity in the second stage of a plan for strategic reserves to help it manage price swings. Overseas purchases rose to a record last month even as processing by refiners including China Petroleum & Chemical Corp. (600028) and PetroChina Co. slackened.

China is one of the main reasons I believe oil prices will remain high.

The following chart shows how fast the Chinese automobile manufacturing industry is growing: 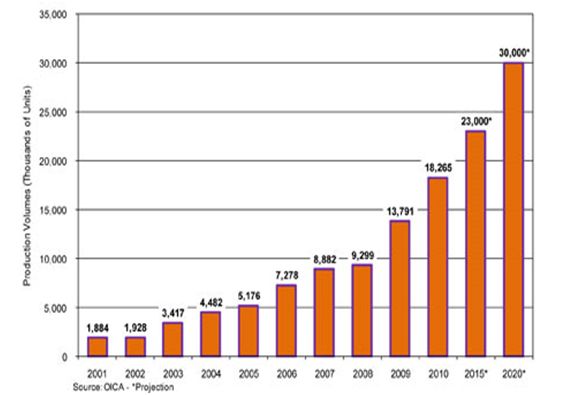 But this is only part of the story... 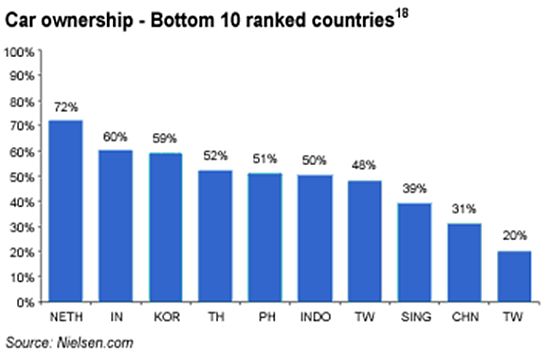 So even though the sector is growing at a robust clip, the automobile culture in China is still very young. Think of it as the U.S. in the 1930s.

If China were to catch up with the trend of other industrialized nations, the ratio would roughly be 10 cars for every 100 people. The same is true of other countries where incomes are rising, such as Brazil and India: 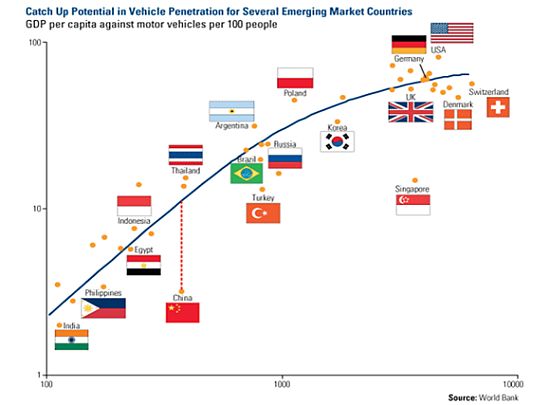 So even though the global economy is slowing down, the Chinese are gobbling up oil at what they consider to be bargain-basement prices.

China, whose overseas oil purchases are second only to the United States', plans to have stockpiles equal to 100 days of net imports by 2020. That's about 600 million barrels (roughly three years' worth of North Dakota production at current levels).

The U.S. held 696 million barrels in its Strategic Petroleum Reserve as of the week ending June 1, according to the Energy Information Administration.

So right now, the world is facing the equivalent of two United States when it comes to oil demand...

The original bull on America,

OPEC's Own Oil Crisis: Shady OPEC Dealings
Editor Keith Kohl looks into the shady OPEC dealings of the past, showing investors why oil prices will rebound to $100 per barrel.

Gold Going to $8,500/oz: Buy the Next Dip in Gold
As I write this, gold futures have fallen below $1,600. We wait with bated breath as the great Fed Chairman Ben Bernanke gathers his papers and readies his announcement...

Investing in Energy Independence: Taking a Lesson from Presidential Promises
Editor Keith Kohl shows investors how to read between the lines and profit from Obama's energy plan.

How to Avoid the Global Debt Debacle: World Tells Europe to Print More Money
Analyst Briton Ryle explains why Greece's decision to stay in the EU is a good thing, but why all is not well that ends well when it comes to debt and bankruptcy across the pond.

Ex-Saudi Aramco Exec: U.S. Becoming Energy Independent
Publisher Brian Hicks shares his takeaways from the Second Annual Mine LLC Oil and Gas Forum, where he spoke last week about Peak Oil, plus the reasons he believes oil prices will remain high... and why this is the greatest investment even of the century.

The Truth about Energy Subsidies: Fossil Fuel Gets More
Energy solutions should be viable without government handouts. Yet the recent figures show oil, coal, and gas got $312 billion... while renewables got $57 billion in one year.