What if I told you Saudi Arabia was on track to become an oil importer within twenty years?

That's a bold claim, you might say, especially considering it's the top exporter of crude oil and oil products in the world.

You might tell me it's completely impossible, that I don't know what I'm talking about...

Saudi crude accounted for around 13% of U.S. oil imports last year, and the nation produced 11.1 million bpd of oil products.

And even if that figure did start to slip, you'd say, what would the Saudis do?

The nation depends on the petroleum sector for over 80% of its revenue, 45% of its GDP, and 90% of its export income. This is a nation that functions solely because it produces petroleum.

According to Rehman, the OPEC nation is already using a fair amount of fuel: It requires oil products for more than half its electricity production, and a quarter of its petroleum production is used domestically.

But its peak electricity rates are rapidly growing at 8% a year. If these rates continue this growth, Rehman wrote, Saudi Arabia will be importing oil by 2030.

Saudi Arabia already has a higher per capita consumption than the United States. Rehman said consumption will likely grow even quicker than the population, recorded at 26 million in July.

You can't deny the hard evidence. This chart from the EIA shows the trend of Saudi petroleum consumption... 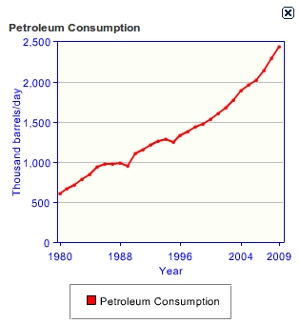 and this one shows production:

As you can see, they're quickly moving in opposite directions.

If you're still inclined to argue, you might bring up the fact that the Saudis were the ones to step up with promises to increase oil production when output from Libya was cut last summer.

If the country can do that, surely it can handle its own increased domestic demand, right?

As Keith Kohl told us earlier this week:

Heavy oil, for example, will always trade at a discount to grades such as WTI and Brent because it requires more processing.

It's cheaper, yes, but much more expensive to refine. And some refineries aren't able to handle the poorer quality stuff.

Call to mind when Libya's production was shut-in last year...

We quickly found out that many of the European refineries couldn't handle the heavier spare capacity being produced by the Saudis.

What happens when this heavy capacity is all that's left — when that's all the Saudis can manage to export to OPEC-reliant nations like the United States?

And what happens when Saudi Arabia, the biggest oil exporter, needs oil itself?

If Saudi Arabia can't produce enough to meet its own needs, there's a good chance no other nation will be able to, either.

It's just one more reason our reliance on OPEC is so dangerous.

And it's more incentive to cheer on domestic production.

Stocks to Trade the Harvest: This Corn Needs No Water
If you want to play the drought, the best way to invest is with nitrogen fertilizer companies. Here are two I have my eye on.

Unconventional Energy Investments: End of the Cheap Barrel
Editor Keith Kohl explains why investors need to get in on the ground floor of our upcoming transition away from oil.

China's Economy Implodes: THIS Could Set Off World War III
The global economy is about to get sideswiped. Are you prepared?

Gold Riots: 20% of Global Gold Production at Risk
Strikes in South Africa worsen. Gold looks like it will make a run at the all-time high in dollars over the next three months, $1900.30 set last August.

The Truth About Energy: Taking Sides Is Costing You Money
Here's some no-spin truth about oil and renewable energy investments.

Exploiting OPEC's Weakness: Is OPEC Counting Their Barrels Too Soon?
One of OPEC's greatest weaknesses could make investors easy profits.