What Are Your Odds of Profiting from Marijuana Stocks?

Conor McGregor fans were not happy.

They wanted a major upset.

They wanted their guy to win.

And if you listened to the crowd of McGregor fans, boy were they pissed that Mayweather didn’t just come out swinging.

But Mayweather isn’t an irrational street fighter. He’s an analyzer who can hone in on an opportunity with the precision of a supercomputer. He’s like the Warren Buffett of the fight world.

Mayweather’s going to walk away from this fight with $300 million, not because he takes unnecessary risks, but because he effectively calculates his odds of winning, then makes a move.

If only most investors were this smart.

A few years back, when I first started investing in the legal cannabis space, I was met with a lot of pushback.

Folks would email me to tell me why I was stupid to invest in something that was federally illegal.

They told me I would lose my shirt.

They told me I was being irresponsible.

But none of that was true.

In fact, I spent nearly two years analyzing the legal cannabis space before I made my first investment, which was a small Canadian cannabis producer operating out of New Brunswick.

The company was called OrganiGram Holdings (TSX-V: OGI), and I was able to pick up shares at about $0.40.

Today, OrganiGram trades for more than $2.00. 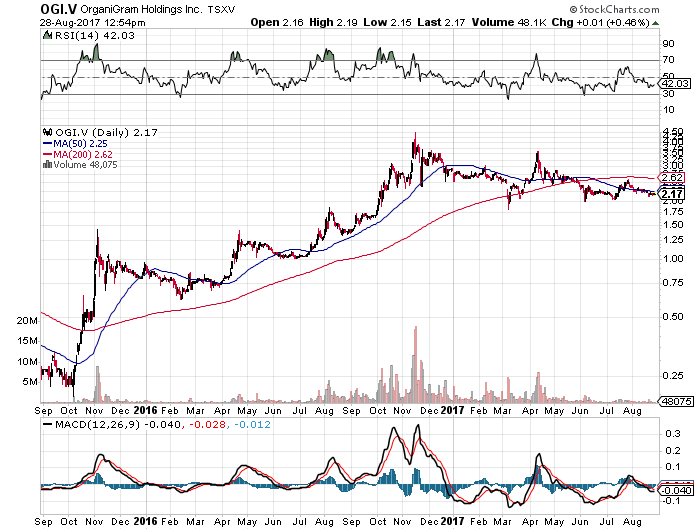 But this was not just some random investment. The truth is, I spent months analyzing the company from all angles. And only when my analysis was complete was it clear to me that this was a no-brainer.

Sure, there was the obvious risk of federal prohibition. But upon further research, it was clear that federal prohibition in Canada was on its way out, and some big-name investors were starting to pony up a lot of money to get an early piece of this action.

Although they may not be household names, in my line of work, it pays to know who the major players are. And make no mistake, I follow every move these guys make. So when I started to see a trend of early-stage capital raises being oversubscribed by just a small group of very powerful investors, I knew I was onto something. And just like Mayweather, I carefully and effectively calculated my odds of making a profit, and I “took the fight.”

Over the past few years, I’ve continued to profit from the rapid growth of the legal cannabis market, pulling off nearly a dozen triple-digit gains in the space.

And make no mistake, this trend has not petered out at all.

In fact, because I’ve made so much money in the legal cannabis space, I was asked to author a beginner’s guide to cannabis investing. You can get a copy for yourself by clicking this link.

In this e-book, I break down the entire opportunity, from the basic fundamentals of why the cannabis industry is so lucrative to a list of 46 cannabis stocks you can buy right now.

I also put together a short introductory video about the legal cannabis market, which you can watch here.

Of course, investing in legal cannabis isn’t for everybody.

Maybe you have an ethical issue with cannabis, or perhaps you’re just not that interested in making some easy money. And make no mistake, landing these triple-digit gains in the cannabis space is about as easy as it gets.

Now, I’m not here to try to convince you to invest in something you’re not comfortable with. But here’s the bottom line: If you’re comfortable with making a boatload of cash in a very short amount of time, then you need to get some exposure to the cannabis space right now. So click here to get started.