Weekend: So Long, and Thanks for All the Oil

The message from the EIA's latest Short-Term Energy Outlook is loud and clear: The world's oil supply is getting tighter from here on out.

In their report, the EIA projected global oil demand will rise about three million barrels per day during the next two years, thanks mostly to a recovering economy.

In other words, don't expect to see another oil price crash...

The EIA expects prices to average approximately $93 per barrel in 2011, and it's only a matter of time before we see a price spike to triple-digits.

For starters, that's what OPEC wants. Also in the EIA's report was this little tidbit:

Consequently, EIA expects the market will rely on both inventories and significant increases in production of crude oil and non-crude liquids in OPEC member countries to meet world demand growth.

When the EIA released its weekly petroleum report last Wednesday, a shiver ran down my spine — and it wasn't because of the snow piled up outside.

As you can see below, non-OPEC production is expected to slow over the next two years: 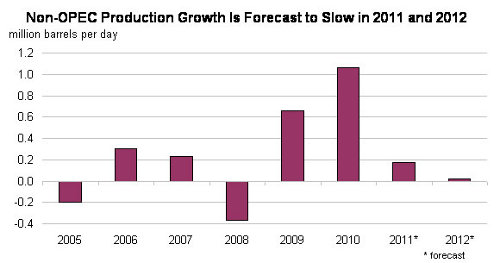 According to Kuwait's oil minister, the world economy can withstand $100/bbl oil.

Of course OPEC would say that — they've said it many times before.

Lest we forget the fact that Kuwait is one of the few oil producers left that can significantly raise production. Triple-digit oil prices would line their pockets with billions in revenue...

Am I the only one feeling queasy at the thought of the world's reliance on OPEC crude?

Between their shady reserves and the declining production from their largest oil fields, how can we possibly trust their word?

Fortunately, we don't have to...

The United States, for example, has been quietly lowering its dependence on OPEC oil.

Not only is domestic production increasing for the first time in decades; but shale extraction technology is getting more efficient with every well drilled.

If you're still unsure how to invest in the upcoming energy crisis, take a moment to check out some of the top energy stories to cross my desk this week:

Greenland's Real Estate Fortune: Why This Bit of Arctic Tundra is Worth $273 Billion
Ian Cooper's latest report sheds light on how a small mining company that controls a tiny piece of land in Greenland is raking in a fortune for early investors.

Our Last Energy Boom: Petro-fracking Poised to Double Reserves
While the mainstream is fixated on battle waging over the controversial hydraulic fracturing process, one company is still flying under everyone's radar — and their revolutionary petro-fracking process holds the key to taking America's Shale boom to the next level.

The Real Reason for the BP Blowout: Blame Peak Oil
Editor Christian DeHaemer talks about the presidential commission's conclusion on the Gulf spill and explains where he's looking for the best performing oil stocks across the globe.

Canada Flips China the Loon: Preparing for an Oil Sands Showdown
Editor Keith Kohl takes a moment to reflect on the reasons China is looking to take control of the Canadian oil sands... and why they won't get it.

Six Stocks for the Next Ten Years: What to Buy for Your Kids' College
Editor Chris DeHaemer explains which stocks he's betting on to pay for his kids' college education.

Horizontal Drilling Makes for Vertical Profits: How to Profit from America's Next Oil Boom
Editor Steve Christ takes a look at the development of horizontal drilling and explains why oil is the key to vertical profits.

The Fed Blows a Cupcake Bubble: Lessons from the Donut Bubble of '03
Analyst Adam Sharp examines the cupcake craze and the recent IPO of Crumbs Inc., the largest retail cupcake store in the United States.

Peak Oil is Past Tense: Exxon, Shell, and Aramco Admit the Peak is Real
Editor Nick Hodge offers Peak Oil admissions from Exxon, Shell and Aramco — and divulges the best way to profit in a world of $150 oil.