The lithium revolution is moving so fast that it’s being hailed as an eventual replacement for gasoline.

You've read the headlines, and I know quite a few of my readers haven't been sitting quietly on the sidelines. After all, the growth stories behind lithium and cobalt have been too good to pass up.

And we all know why these two remarkable metals are taking the world by storm: batteries.

Face it, they've become a staple in nearly every facet of our lives: at home in the myriad of new devices that pop up constantly and, of course, in transportation.

But as easy as it is for most people to blindly jump onto the bandwagon, it’s time to take a step back and look at the bigger picture…

Lithium was a bit of a tricky one in the beginning…

You see, before electric vehicles really took off, the now darling of the energy industry was actually something of a secret.

Now, I don’t want to say Elon Musk was the only person to help snowball the lithium revolution, but his influence is undeniable.

What he’s built Tesla into in less than 20 years is nothing if not remarkable.

And even if he doesn’t pull it all off perfectly, he's unquestionably led us down a new path. Electric vehicles have come a long way under his influence.

Imagine if Elon Musk unveiled his Model 3 and it looked like this: 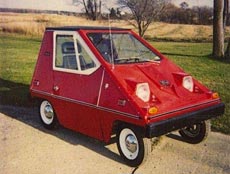 One of the first EVs, this Vanguard-Sebring CitiCar, had a top speed of 30 mph and a top range of around 40 miles. As you can well imagine, these went out of style fast as long-distance driving became more common.

Now, hardly a day goes by that I don’t see a Tesla while I’m out and about. Sure, they may not be everywhere just yet, but you have to admit they are much more common than before.

And that’s not even considering all the hybrid vehicles out there using lithium battery technology to balance out gasoline use. You can’t count the Priuses in Baltimore; they’re everywhere!

Just how quickly both hybrids and all-electrics have caught on is a testament to how ready the world is for something new.

But this lithium explosion comes with a catch...

There are two things consumers want in new products, the same two things they want in every electronic item that’s ever been put on a shelf: convenience and style.

It’s Farther Than You Think…

Right now, Tesla only checks off one of those boxes.

Those cars are as stylish as they come. It’s like driving the latest iPhone, but without the constant reminders that your iTunes needs to be updated.

However, driving an all-electric vehicle right now can be massively inconvenient — if you don’t live near a charging station.

The car comes with a wall charger you can plug in at home, but that gets you about a mile an hour in charge. Tesla partner charging stations run about three miles per hour, and Superchargers will get you almost to full capacity in an hour.

Still, I’d take a 10-minute run to the gas station over that any day.

All this means is that lithium battery technology needs some improvements before it becomes as ubiquitous as even today’s hybrids.

Alternatives like hydrogen could offer a reprieve — though I’d think having almost no access to a fueling station outside of California would be at least as inconvenient as an hour-long charge, if not more so.

So, I said at the beginning I’d be looking at the reality of the situation…

And that reality is that these problems may actually do more good for both lithium and cobalt than bad.

It means the technology isn’t done evolving, isn’t done growing, and neither is the market.

Even with lithium above $9,000 per metric ton and cobalt up to nearly $26 per pound from just $10 a year ago, we’ve still not seen the peak for either of these thriving metals.

The time it will take to perfect the use of today’s lithium batteries — or replace it with something better — just means both materials have got longevity, even while investors are raking in the gains right now.