Where's the first place you'd think of if I were to ask you about a water crisis?

It's safe to say most would say Michigan. They certainly wouldn't be wrong, either. The ongoing water crisis in Flint has been on the main stage of the national media since the story broke.

Of course, your answer would be drastically different if you lived west of the Rockies.

You would also probably chastise me for not asking you about it sooner.

You see, this water crisis isn't a recent issue. It's been an ongoing thing that has steamrolled into a full-blown disaster.

I'm talking about a problem that has persisted for nearly half a decade.

More importantly, it's a crisis that money can't solve, no matter how much is thrown at it.

And they are throwing money at it, dear reader. Last year, California's governor put together a plan to combat the state's water crisis. It was a $1 billion plan that supported both short-term relief efforts and long-term water projects.

This wasn't the first time...

In 2014, the emergency relief package that worked its way through the state legislature was worth $687 million.

It should be clear by now that water is, has been, and will continue to be the ultimate global commodity...

If you still don't see the crisis here, keep in mind that we're talking about more than bathing, brushing your teeth, or watering your lawn.

Agriculture is a $54 billion industry in the Golden State.

It also generates more than $100 billion in economic activity.

And to give you a better idea of the situation, sometimes a picture is worth a thousand words: 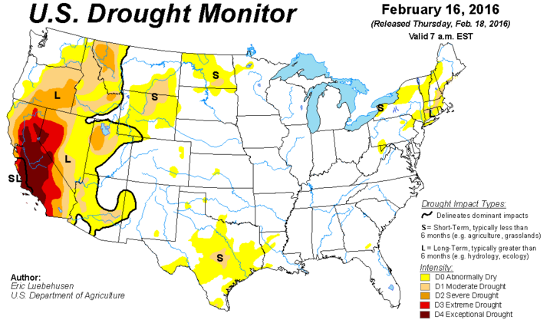 There it is, plain as day for you.

The darkest shade of red above indicates a D4 drought and is considered an exceptional level.

Now, to put some perspective on the evolution of California's drought conditions, take a look below to see how it has progressed into a full-blown crisis since 2012:

As you can see, the latest data from February 2nd (all the way on the far right in the image above) shows just how exacerbated the situation has become.

Perhaps the biggest concern is that this drought shows no signs of dissipating.

I was fortunate enough to have visited Bakersfield, California, many years ago. Little did I know that just a few years later, the area would be dry as a bone.

Yet there are communities in the state today where residents have no access to running water.

This isn't a matter of irresponsible politicians playing chicken with their city's water supply.

Fortunately, Michigan sits next to the Great Lakes, which account for 20% of the world's fresh surface water and make up 95% of the United States' water supply.

Meanwhile, cities like Los Angeles have to import 85% of their water supply.

I know it's a lot of doom-and-gloom to digest. And you probably don't need me to tell you there are always opportunities that spring out of situations like the one in which California is entrenched.

In the coming weeks, I'm going to show you how to turn this water crisis in your favor.