Wall Street Has Been Wrong About Gold for Decades

Learn How to Play Their Folly

The price of gold hit a two-week low yesterday ahead of today's FOMC announcement.

The Fed is expected to keep interest rates steady. But economists are expecting a hawkish tone from Yellen and crew.

Over 80% of economists believe the central bank will lift benchmark rates once or twice this year.

Conventional wisdom says that assets like gold and silver (which don't pay fixed yields) tend to decrease in value during periods of rising interest rates.

But conventional wisdom is wrong...

Essentially, the logic is that investors put downward pressure on gold prices leading up to what they expect to be an interest rate hike announcement.

Then, following the hike announcement, the downward pressure is eased, and gold subsequently increases in value.

In other words, gold gets oversold ahead of a rate hike, and prices correct upward following the announcement.

History shows that gold prices also fall leading into a rate hike and generally rise, though sometimes with a lag, after the first rate hike. This is shown in charts 3-6, for the last four Fed tightening cycles. Investors are apt to unload gold in anticipation of tightening monetary policies. This negative pressure is sustained until the Fed announces a rate hike which then eases the negative sentiment towards the yellow-metal. This explains the subsequent rallies in gold that occurred shortly after the Fed announced the first rate hike in the last four tightening cycles.

Here are the charts the quote is referencing: 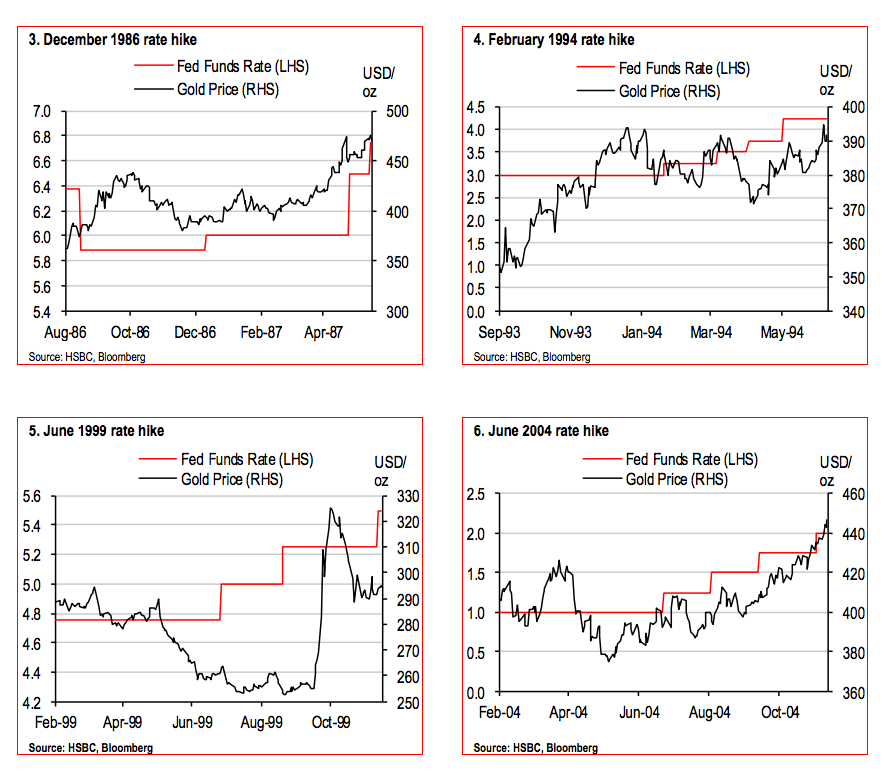 Here's what has happened to gold prices since December, when the Federal Reserve raised interest rates for the first time in a decade: 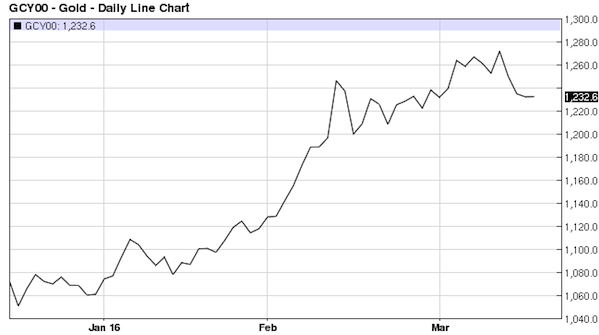 We can see this same kind downward pressure being put on gold right now ahead of what investors expect will be a hawkish announcement from the Fed.

Compared to the week before — when the COT report showed a 4.8% decrease in total COMEX short positions on gold — it's clear that investors are once again putting downward pressure on gold prices ahead of the Fed flirting with a rate hike.

Now, as I mentioned, most economists don't expect the Fed to announce a rate hike this afternoon. However, they are expecting to hear hawkish sentiment.

And if history is correct, the downward pressure on gold right now as a result will be eased once investors swallow the news, and we should see an uptick in prices. So I think right now is a good time to be a gold buyer for a short-term trade.

Going forward, however, the Fed is expected to increase rates in June. And again, if history is correct, we should see downward pressure leading up to that announcement. That will be your signal to re-enter gold.

Now, all this said, the price of gold is ultimately not driven by interest rates.

At the end of the day, the price of gold moves on supply and demand, like everything else. And between the two, demand is the most important for gold.

Even though there's little in the news about it, the demand for physical gold is quietly soaring:

I could go on all day about rising gold demand. But you get the point.

What all this is leading up to is the final mania stage of this gold bull market.

And that's where the price of gold could quadruple (or more) from here.

During the final mania stage of the great bull market of the 1970s, the average monthly gold price increased 514% between August 1976 and January 1980. 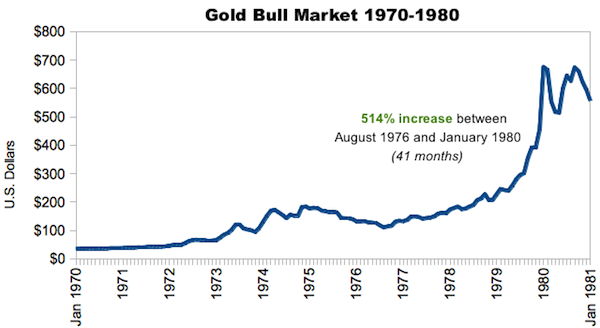 Right now, we could be sitting at right about 1977 in that chart above.

I've spent the past 12 or 13 years researching, investing in, and watching the gold market. And I haven't seen a more exciting time to be a gold investor. Stay tuned to Energy and Capital over the next several weeks, as we plan to bring you several new gold investing ideas.

Get Ready to Profit,