I hope you’re not forgetting a very important anniversary.

It was an event that took place 10 years ago in Saskatchewan, Canada. More importantly, the effect of that situation arguably led directly to the uranium bubble that took place in 2007.

And if you’ve been on the fence regarding the true value of uranium, take note.

Lately, the one thing that hasn’t been discussed much about uranium is supply — and the potential supply squeeze that could send uranium prices flying!

First, let’s freshen up with a little history lesson...

Anyone that has a dime invested in uranium has come across Cameco at one point or another.

After all, the company accounted for about 22% of the world's uranium in 2015, with mines in Canada, the U.S., Kazakhstan, and Australia. Today, its highest producing mine is the McArthur River, yet its biggest reserves — the largest undeveloped reserves in the world, in fact — are under the Cigar Lake mine.

Back in 2006, a catastrophic flood occurred at Cigar Lake. And as you can see below, it sparked an unprecedented surge in uranium prices: 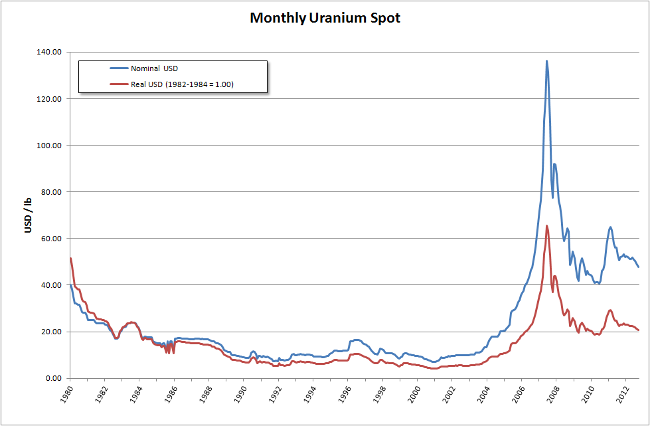 It wasn't until 2010, after a lot of pumping and yet another influx of water, that Cameco declared the mine clear and ready to resume work.

But by then, the damage had been done...

Keep in mind, this was before the Fukushima nuclear meltdown reminded people that they hated nuclear power. Power plants were still being built, and uranium demand was steady.

Was the uranium bubble justified? After watching this disaster take place in a mine with such high-grade reserves cut off, fear took over, and prices skyrocketed.

And this was before the mine actually went into full production in 2015!

Now compare this to today...

We have plenty of uranium to cover demand, and that demand has been unwaveringly low. This has brought prices way down and stagnated investment into new mining infrastructure.

Don't get me wrong; companies have continued investing to keep production steady, but that's about it...

Slow and Steady Wins the Gains

Uranium production has been growing incrementally since 2007.

Last year, more than two-thirds of the world's supply came from just 15 mines — four of which are mainly owned by Cameco!

But instead of another threat to supply, we’re looking at the other side of the equation: demand.

Currently, there are 444 nuclear reactors operating worldwide. Another 63 are being built, and even more decommissioned plants are expected to come back online, albeit with new safety regulations.

China is increasing nuclear use, as are India and the U.S. But most important for this market's recovery will be the place this mess started: Japan. The country currently has only three of a total 42 possible reactors up and running again, but another 25 have applied for a restart.

Japan is the turning point for uranium's next takeoff. It's not a matter of if those reactors will be restarted, but when.

Point is, we'll be looking at a supply shortage within the next few years, thanks to this jump in demand rather than a bust in production.

And this comes without the addition of new mines!

Right now, most are breaking even on long-term contracts worth $50 per pound of uranium. But it's going to take a lot more than break-even prices for producers to bother with extra production.

And with yellowcake at $50/lb., more companies will be able to turn a profit.