Around the turn of the last century, I had the opportunity to have lunch with a couple of ex-pat Venezuelans at a marina on the southern tip of Manhattan.

We sat in an open-air cafe down the quay from an enormous black yacht owned by a prince of Saudi Arabia. The seagulls laughed, and metal halyards slapped against aluminum masts. The iced tea went down smooth on a hot day as we ruminated over the collapse of the richest country in South America.

It was the fault of President Hugo Chavez, who was elected in 1999. Chavez imposed a form of Andean socialism. The people I was meeting with were the smart, hardworking capitalists who had amassed fortunes in the oil boom of the 1970s.

You may not know it now, but in 1970, Venezuela was as rich as Norway and ahead of Greece, Israel, and Spain. My lunch mates told stories of flying to Miami and paying cash for Cadillacs and Mustangs. But times change. Now they were seeking ways to preserve their wealth.

“It is the fault of the government workers. Fifty-five percent of the people work for the state. Once, they are in the majority, they vote themselves everything,” said one man.

“They are gutting the oil sector. Everyone who is any good is leaving,” said another. “It's like eating the milk cow.”

These folks saw the writing on the wall and had the wherewithal to get out while the getting was good.

Chavez is now dead, and good riddance. He left only $4.2 billion for his daughter Maria to somehow manage. His sidekick, Nicolas Maduro, is now in control. He has continued all of Chavez’s poor socialist policies with none of the charisma that made Chavez likable to the poor.

Chavez’s brand of socialism, like all the rest, has failed. The malinvestment, price fixing, and war on capitalism has left only chaos and misery.

The currency, the Venezuelan bolívar, has fallen sharply. 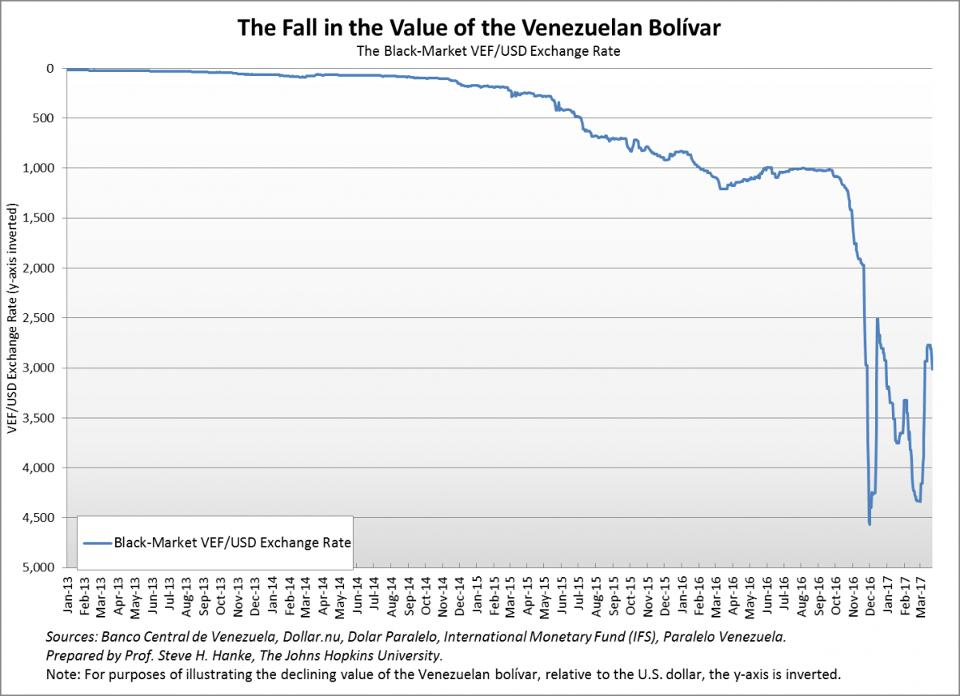 Inflation is running at 150% a month — but this is down from 800% last summer. No market can function in that climate, of course. The people are starving, and the army has taken over food distribution, which, due to corruption, has made things worse. Hospitals can’t function without medicine. Violence is terrible — 60 to 80 people a day are murdered by gangs, which is the highest homicide rate in the world. Imported Cuban secret police “disappear” opposition.

And in one of the great ironies, Venezuela, which has more oil than any other country at 298 billion barrels, now must import oil from the U.S.

Things are coming to a head. Over the weekend, the government-loyal court disbanded the parliament, and then rescinded the order a day later on orders from Maduro. One theory is that Maduro was concerned his neighbors might take action against a failed state on their border.

We know things are bad in Venezuela. Worse than bad — they’re crazy. And I wish I could tell you that things are going to get better.

Because, you see, it's not just happening in Venezuela. The global economy is in a bind.

In the United States, we’ve had years of unrest, from riots in Baltimore and Ferguson to school shootings and terrorist attacks. We have perhaps the worst political class in 241 years. The arrogance and hypocrisy are ever-present. The spin and lies are constant. Nothing can get done unless it is bought and paid for by special interests.

All of this unrest happening in America and throughout the world is a side effect of a global economy in turmoil and on the brink of collapse.

It’s a symptom of the real sickness plaguing us.

It doesn’t matter if you’re Republican, Democrat, Libertarian... whatever.

If you’re a human being who hasn’t been living under a rock somewhere, you feel that something big and bad is about to happen.

Those "too big to fail" top-five largest financial institutions that were bailed out in 2008 are now 25% bigger than they were... and more dangerous than before.

Private businesses have taken on more debt than any other time in the past 13 years, and an astounding 863 companies had their credit ratings downgraded... the most since 2009.

Huge franchise branches are closing down in bulk...

And everyone wants the government to give them more... more pensions, more health care, more war, more stuff we can’t afford.

If you are sick of it, perhaps it is time to act. Click here now and discover what is really going on.

Is it Time to Trade in Your Gold?
One of the simplest yet often most overlooked strategies for precious metals investing is the gold-to-silver ratio. You don't have to invest any extra money. But you still increase your gains exponentially over time.
Sell Dollars, Buy Gold
The dollar is falling. Energy and Capital editor Christian DeHaemer tells you should sell your dollars and stock up on gold.
Where Do the Rich and Famous Hide Their Money?
Energy and Capital editor Keith Kohl questions where the rich and famous hide their money and why they choose to do so in the first place...
Hydrogen Fuel Cells: The Downfall of Tesla?
Lithium has been the front-runner in the battery technology market for years, but that is all coming to an end. Elon Musk is against them, but Jeff Bezos is investing heavily in them. Hydrogen Fuel Cells will turn the battery market upside down and we've discovered the tiny company that is going to make it happen.