In a post-peak-oil world, an interesting dichotomy is emerging between our two primary sources of energy.

I say post-peak-oil because of a report issued by the International Energy Agency last week. It showed global crude oil production peaked in 2006 at 70 million barrels per day (mbd), and will plateau around 69 mbd through 2015.

Now pay attention to this part, because it's where making money gets really easy...

But crude oil production will have peaked around 70 mbd.

What's an oil-starved world to do?

In that IEA scenario, continuing to consume oil at current rates means the price will hit $240 per barrel by 2025 as a 30 mbd shortfall emerges in crude production.

It was enough for IEA Chief Economist Faith Birol to declare, “The age of cheap oil is over... Governments and consumers should be prepared to pay higher oil prices.”

So we have to pay more. We've been saying that for years.

But what's going to fill the 30 million barrel per day gap in supply?

Renewables will play a part, but for the most part, “the difference between supply and demand will be made up from rising production of natural gas liquids and unconventional oil, notably Canadian oil sands.”

They're the best of fuels and the worst of fuels — depending on who you talk to.

Either way, unconventional oil and natural gas are about to make energy investors tons of cash. All you have to do is look at the recent activity of the major players in the space...

Say it with me: Unconventional oil and natural gas will fill the gap.

Just yesterday, Williams Cos. (NYSE: WMB) paid $925 million for 86,000 acres of land in North Dakota's Bakken formation. And it plans to double the amount of rigs on the land — located on the Fort Berthold Indian Reservation — in two years.

The company has also acquired 100,000 acres in Pennsylvania's Marcellus shale.

One more time: Unconventional oil and natural gas will fill the gap.

And in one of the biggest recent moves, Chevron (NYSE: CVX) made a $3.2 billion bet when it bought Atlas Energy (NASDAQ: ATLS) last week.

Guess what Atlas does? It's a leading producer of natural gas in the Marcellus shale.

Refrain: Unconventional oil and natural gas will fill the gap.

Look what happens when a company gets bought out: 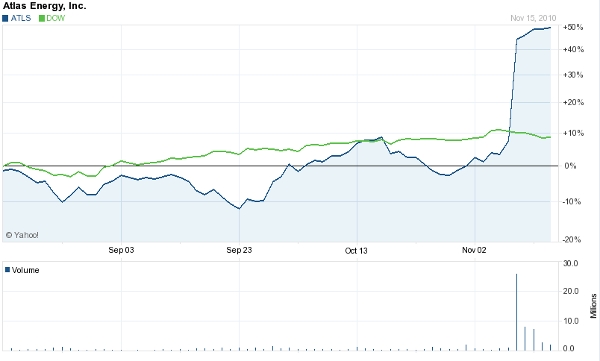 Atlas was trading for $30.00 the day before the Chevron deal was announced. It's up 50% since. And deals like this will continue...

According to The Wall Street Journal: “Atlas is just the latest independent producer to sell out to a global giant. Smaller companies such as Atlas developed the new technologies that unlocked huge new troves of natural gas locked in a type of dense rock known as shale."

It continued, “For big oil companies, U.S. shale gas is a rare opportunity to get access to big new fields at a time when older fields are drying up.”

So if we've learned anything from these deals, it's that small companies with access to unconventional oil and natural gas are about to go gangbusters as those fuels are sought to fill the gap left from dwindling supplies of easy crude.