What are the Real Shale Gas Figures?

There have been bubbles in the housing sector, derivatives, and credit card debt, but is there a shale gas bubble ready to rear its ugly head?

According to Green Tech Media, Powers maintains that reachable U.S. shale gas is approximately 127 trillion cubic feet. This is in stark contrast to the U.S. Energy Information Administration figure of 482 tcf. Powers based his analysis on drilling history rather than recent spurts in drilling success throughout the country.

Powers’ calculations severely contradict the EIA’s higher production numbers in many shale-rich regions. For instance, in Arkansas’ Fayetteville Shale, Powers is going by the numbers from the Arkansas Oil and Gas Commission—showing a figure that “4,400 wells produced 3.3 tcf since 2005,” as cited by Green Tech Media. In Powers’ view, the Fayetteville region only has recoverable shale gas of 10 tcf, as opposed to the EIA’s 32 tcf.

In addition, Powers touched upon the Antrim Shale in Michigan. While there has been a spike in production numbers, he credits the new method of “hydraulic fracturing and horizontal drilling” as reasons for the increase, according to Green Tech Media.

However, Powers went by the lagging production volume since the 1980s as a reason not to get too excited about Antrim Shale. There has been a drilling boom in north and northeastern shale sites, but things are slowing down.

This is a map of shale gas hotspots throughout the country. 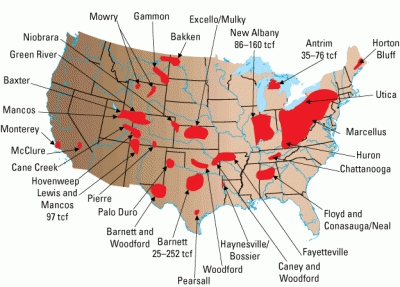 In the northeast, the Marcellus Shale has the largest supply of shale gas reserves in the country, but companies and investors should not look to this region for a long-lasting boom. An article by the Sandusky Register discussed a slowdown in Marcellus boom drilling in 2013. Many drillers are putting operations on hold in anticipation of “pipelines to expand, new markets to rise and wholesale prices to rise.”

From the Sandusky Register:

An article from boston.com highlighted the closing of numerous refineries throughout the northeast, stemming from environmental laws, competition abroad, and hard-hit economies at the state and federal level. However, there is some light amid the darkness with the influx of domestic crude. This allows refineries to cut foreign reliance on imports.

Only time will tell whether or not northeastern refineries will keep up their production numbers.

The shale boom in the northeast is already showing signs of slowing down, which seems to support Powers’ view that shale extraction has been highly overstated. There is also the fact that the federal government has a history of cutting shale gas reserve figures in the Marcellus region.

Why has there been so much hype on shale gas?

Critics would argue that companies have exaggerated shale gas drilling for the purpose of keeping stocks up. Whether or not exploration companies are intentionally deceiving investors regarding shale potential is open for debate, but oil and gas companies naturally want to promote their companies and the market they are engaged in.

The problem is that hype and excitement for shale may not have jived with the actual numbers, and many in the industry may have willfully ignored the actual calculation models.

While some peers may fiercely disagree with Bill Powers’ assertions about American shale, no one can deny his consistent analysis on past production volume in each region. While his projections take little account of future technology and investment, his analytical methods do conform to the conventional bottom-up approach of analyzing future production. By starting with past drilling numbers and ending with future volume, Powers does give himself a solid base to support his claims.

Powers’ calculations are privy to criticism; however, he is not the only top industry expert that disputes mainstream figures.

Powers’ assessment is supported by geologist and Houston-based energy consultant Arthur Berman. The knife that pierces the heart of American shale gas is the calculation of a 25 year natural gas reserve, according to Green Tech Media—a number at odds with a more optimistic projection of 100 years. This is a deflating assessment not only of shale gas, but of the entire gas market in America.

Companies will decide production volume based on investment in well drilling and equipment. It will be much harder for extraction as companies explore new and less than accommodating territory. Shale gas is hard enough to extract, but drilling wells into unknown areas will force companies to spend more on top-notch technology—something that could take years.

Does this mean shale gas will be a dead market for investors?

No, but Berman and Powers' analysis shows that caution must be taken before investors pour most of their funds into the shale market.

If more investors get wind of these less-than-stellar findings, there could be a plummet of shale gas stocks across the board. Berman and Powers could be wrong; there could be 100 years or more of natural gas in the United States.

But how much of that gas is actually recoverable? If Powers and Berman are correct, then exploration companies have plenty of work ahead if they wish to stretch beyond the 21st first century.