Time for a Natural Gas Comeback

I don't know what it is, but whenever the herd cries Sell!, something inside of me stands up and takes notice...

And usually, upon further inquiry, I find out that more than half of them have no idea why they're heading for the exit — except that it's what everyone else is telling them to do.

After all, anyone who has put a dime into natural gas stocks is well aware of how low prices have dropped.

Here's a look at how natural gas prices have tanked over the last four months: 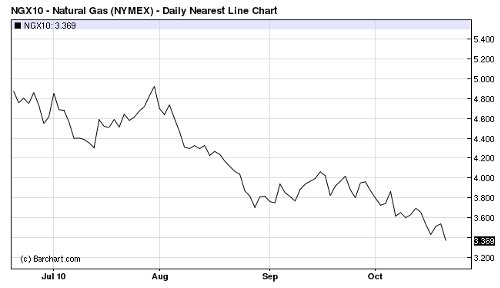 Yet while most of them tend to panic, I see a massive opportunity developing.

It's the reason I'm packed and ready to head north — the moment I heard whispers about this new technology, I knew I had to see it for myself.

Before I go any further, you need to know why the future of natural gas isn't as gloomy as most of the herd would have you believe...

Whenever I ask people why they hate natural gas, many are quick to point to the oversupply that plagues the U.S. market.

And that much is true. Our domestic gas production has been on a good run over the last five years. For that, we can thank the development of unconventional production — specifically from shale deposits across the United States.

As you can see below, U.S. production has been growing steadily:

U.S. gas production is expected to rise another 3.5% this year, according to the Energy Information Administration (EIA).

That makes perfect sense. Companies have been drilling into shale formations across the U.S. at a feverish pace.

In the EIA's latest Short Term Energy Outlook, you'll find the number of horizontal drilling rigs has increased from 712 to 962 since October 2009.

But it's not the supply side of the equation that surprises most people... One look at a natural gas prices chart, and most people tell me that demand is dropping.

That simply isn't true. Demand has actually been rising this year:

U.S. consumption levels in July were higher this year than in 2008, when prices were incredibly high.

And yes, demand dropped in 2009 when everything hit the fan the previous year... But it's slowly coming back.

The EIA's latest Short Term Energy Outlook is projecting a 4.6% rise in U.S. natural gas consumption in 2010. Industrial consumption is expected to grow 7.5% this year.

And this is what we've been waiting for.

Natural gas investors have said to themselves, at one point or another, if only demand would pick back up...

One of my readers recently asked me to weigh in on LNG. I've often seen LNG being compared to U.S. domestic production.

(You might remember how the U.S. made a huge push for LNG in 2007. Imports of LNG nearly doubled that year.)

Unfortunately, LNG is going to lose this game...

I don't believe LNG can overcome the domestic shale boom. You can see from the chart above that our imports of LNG are lagging — especially with natural gas prices below $4/Mcf.

I know how unattractive natural gas looks right now. But today, I want you to see natural gas from the perspective of my readers and I.

Here are just four natural gas plays out there with a long-term kick for investors: 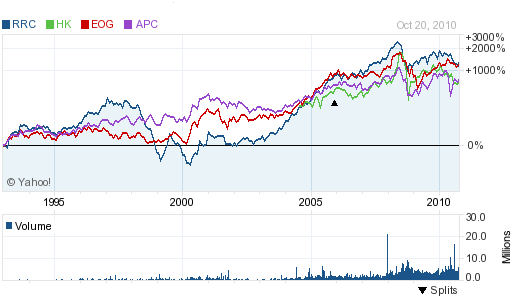 Believe me, the gains are there for the taking...

We just need to exercise a little patience. Natural gas is the obvious bridge between oil and renewable energy.

Now, that's not to say that areas like nuclear energy will be left in the dust. My colleague Nick Hodge has uncovered one of the most profitable nuclear stories buried by the media.

The natural gas comeback, however, is the reason I'm heading to the Keystone State in a few hours...

I may have found one company that could change the shale game forever.

You'll hear all about it when I get back.