Mark your calendars, ladies and gentlemen: January 12, 2016 is the day the first LNG tanker will be filled from the Sabine Pass in Louisiana.

This, however, is just a test run. Commercial tankers won't start sailing until later in the year.

But this is the official start, the U.S.'s first foray into the global LNG market.

So why should you should care?

Because despite the bullish outlook on the market, there's still a tremendous window of opportunity here for individual investors to quietly get in early — before these exports go into full swing!

Let's go ahead and dispel some of the common misperceptions... starting with Japan.

The country has recently restarted several nuclear reactors since the four-year-old boycott of nuclear energy after the Fukushima disaster.

Now we're expecting another 15 to 20 nuclear reactors to restart within the next five years, which could push the country's demand for LNG lower, to under 80 million tonnes per year.

As I'm sure you've guessed, that's putting a damper on sentiment over the LNG trade.

After all, Japan accounted for 36% of global LNG trade last year, importing an excess of 120 billion cubic meters of gas.

So the world's biggest LNG importer is about to cut its imports. Should this worry U.S. LNG companies?

You see, Japan would not have been the U.S.'s biggest client, simply because the U.S. isn't Japan's first choice for LNG supply — that spot goes to Australia.

Not only are the Aussies already an established LNG exporter, but they can also offer lower prices to Japan due to their close proximity to the country.

And even though Japan will still want to diversify its import portfolio, I can't see Australia losing its market share anytime soon.

However, there are some cases where geographic location isn't the biggest factor...

Before we delve any further, first take a look at this map from the BP Statistical Review of World Energy 2015: 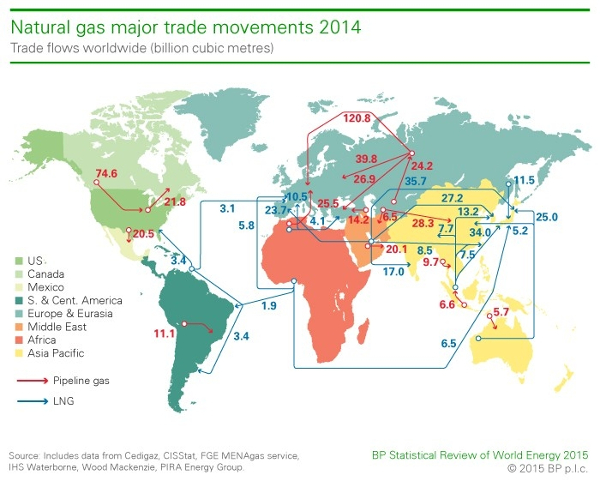 It turns out the single largest line of trade of natural gas is from Europe to Russia via pipeline — amounting to a staggering 120.8 billion cubic meters of natural gas for the year!

You can probably guess where this is going by now: Russia's political disputes with Ukraine are hurting its natural gas monopoly in Europe.

Now, I've mentioned before how these political disputes lead to questions of debt and ownership of the very pipelines Russia uses to transport its natural gas through Ukraine.

And more recently, the EU has denied Russia new pipeline routes to get around this problem.

Russia's bargaining power with this commodity has been slipping. According to Eurostat, the European Union's Luxembourg-based statistical office, the group reduced natural gas imports from Russia by 2.3% between 2013 and 2014.

What's more is that there are already signs the EU is diversifying its natural gas imports.

It turns out that the first LNG export contract in the U.S. was signed with France... and that's just the beginning.

The bottom line here is that the EU is unquestionably trying to reduce its reliance on Russian natural gas.

Meanwhile, the U.S. is ramping up exports, which will be ready to replace the EU's gas demand with a more affordable, less volatile supply over the next few years.

More importantly, the market cycle is about to turn, and glut or no glut, gas prices won't stay this low forever — too many economies depend on it.

Of course, the ace up the sleeve for U.S. LNG exporters is a readily available supply of cheap natural gas in prominent shale and tight gas plays like the Marcellus.

U.S. Export: The Future of LNG
Energy and Capital editor Keith Kohl show investors how they can capitalize on the future of U.S. LNG exports... right now!
This Miracle Mineral is About to Surge Higher
Energy and Capital editor Keith Kohl reveals the "miracle mineral" that is about to explode higher in 2016.
Oil Fight: GO
DeHaemer gives you the market synopsis on oil. Here are seven reasons to buy and seven to sell.
Lithium Goes Global: Just One Concern Remains
Energy and Capital editor Keith Kohl connects the dots for investors trying to get in on the ground floor of the lithium revolution.
Hydrogen Fuel Cells: The Downfall of Tesla?
Lithium has been the front-runner in the battery technology market for years, but that is all coming to an end. Elon Musk is against them, but Jeff Bezos is investing heavily in them. Hydrogen Fuel Cells will turn the battery market upside down and we've discovered the tiny company that is going to make it happen.