Trump, the Fed, and Gold

There has been a lot of speculation over what the Trump administration will mean for the Federal Reserve.

Investors hope the president-elect will be able to pressure the Fed (against their will) to keep interest rates low. Some believe Trump will move to replace key board figures. Others are even wondering if he will be able to take control of the Federal Reserve board completely.

But one thing is certain...

There is no love lost between the two — at least not as publicly stated.

Back in September, Trump accused Fed chairman Janet Yellen of purposely keeping interest rates low to help promote the DNC — even though he has constantly praised low interest rates and the market is betting on cheap money now.

Vice chairman Stanley Fischer and Trump are both seeking more fiscal policy stimulus to the economy. But Fischer is a staunch globalist who generally represents everything Trump's stated nationalistic direction of “America first” is against.

Moreover, Fischer's history of supporting Socialist Zionism most certainly does not fit into the Trump philosophy, nor will it find traction among his supporters.

But I suspect Trump will actually do little to nothing in terms of pressuring or significantly restructuring the Fed.

It's ultimately in Trump's best interest to simply keep everything as it is right now to use as a scapegoat, if needed.

If the economy does well, Trump takes the credit. If the economy falters, it's the Federal Reserve's fault — and, even though Trump's hand were tied, he was right the whole time. It's a win-win for Trump.

As it happens, there are also two currently unfilled positions on the Fed's board. Trump may fill those positions.

And both Yellen's and Fischer's terms are up in 2018, so Trump could potentially seat four of the seven controlling Fed board members; hence the speculation that Trump could control the Fed.

But again, I think it's in Trump's best interest to keep the Federal Reserve exactly as it is right now to use as a scapegoat, if needed. Fortunately for Trump, he won't be forced to make the decision to replace Yellen and Fischer for quite a while.

Yet there is still an intrinsic and unsolved conflict between Trump (and his supporters) and the Federal Reserve System that may be forced to come to a head...

But their methods to achieve economic growth fundamentally differ.

One method is not better or worse than another. Rather, the biggest difference in the methods simply concerns who profits the most from the economic growth.

And in short, the Federal Reserve's vision of economic growth benefits mostly the banks, while Donald Trump's vision focuses on giving the benefits to businesses that aren't banks.

This should serve as a sobering reminder that neither party is primarily working to benefit the American citizens here — expect by way of benefitting themselves first.

Nevertheless, it remains difficult to determine who will ultimately win: the big banks or big business. Investors are hedging their bets on business right now. But most likely, both sides will continue to do what they've always done: work together. One hand washes the other.

So I don't see Trump doing very much in terms of pressuring or significantly restructuring the Fed.

Rather, I believe Trump will actually start to work closely with the Federal Reserve seeking more fiscal stimulus. And this will only serve to devalue the U.S. dollar through heavy inflation.

As a result, gold will continue to gain popularity as a wealth-preserving vehicle and experience dramatic price increases from current levels. And there might be a simple way to know exactly when the next big jump in gold prices will occur...

I recently produced a short video explaining the gold leasing market. Believe it or not, gold is often leased (at cost) between banks, producers, manufacturers, and others.

The lease rate of gold changes daily. Sometimes anomalous spikes in these lease rates can signal big movements in gold. Take a look at the big spike in gold lease rates right before the yellow metal took off back in January... 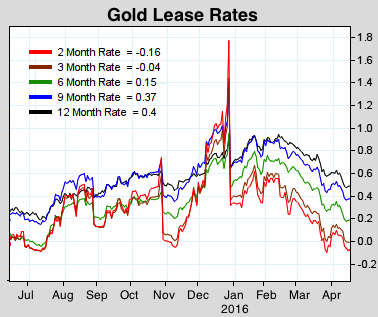 This spike occurred on nearly the exact day gold prices hit their lowest point in their four-year bear market between October 2011 and December 2015.

And immediately following this spike, the price of gold experienced its largest quarterly growth in over three decades.