Trump Could Save 30 Million Jobs by Eliminating Fuel Economy Standards

Check out this headline … 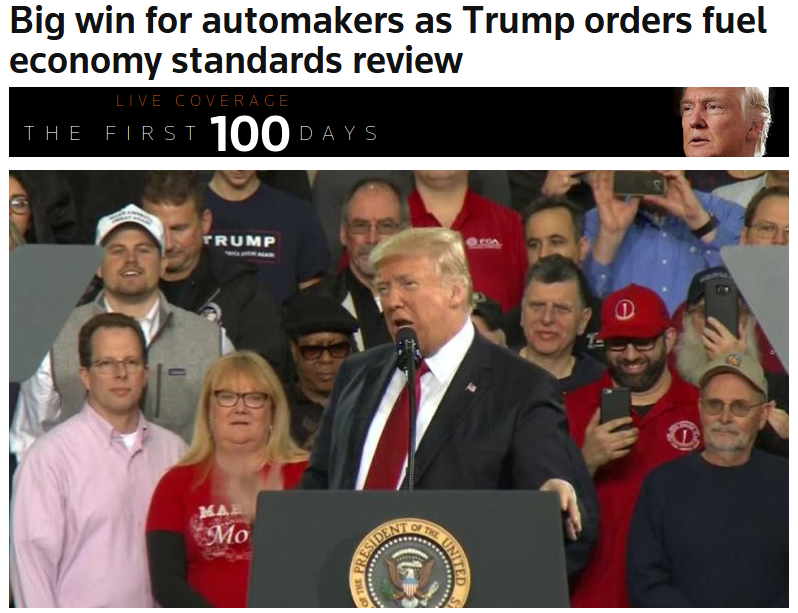 There’s a theory that the trials and tribulations of the US auto industry are partially the result of fuel economy standards that the Obama administration put into place a few years back.

Those standards required the increase of fuel economy to the equivalent of 54.5 mpg for cars and light-duty trucks by model year 2025. The standards were designed to reduce greenhouse gas emissions and reduce U.S. oil consumption. But Donald Trump maintains that it's those standards that are costing US auto manufacturing jobs. He is not only wrong, but he’s not even questioning these standards because he wants to save a bunch of shitty manufacturing jobs for the poor saps who fell for his job creation rhetoric.

He might as well just tweet that by eliminating those fuel economy standards, he’ll be able to save 30 million jobs.

You see, anything that reduces oil consumption is bad for the oil industry. And Trump and Rex Tillerson aren’t having any of that. Trump’s so far up the ass of Exxon (NYSE: XOM), he’ll do just about anything to ensure the American driving public spends as much as possible on petroleum products. 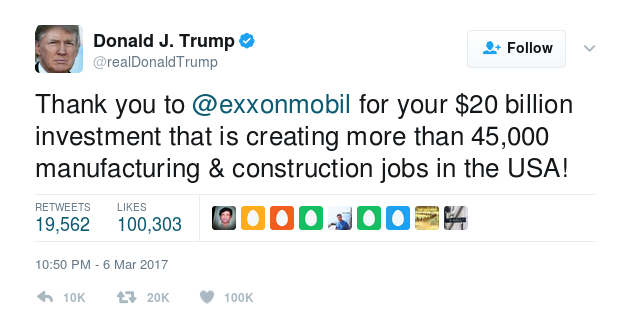 Not so great for you.

When Obama’s fuel economy standards initially came out, U.S. automakers claimed the rules were too expensive and would cost American jobs. Yet here we are today, with the most American-Made car in the market being one that actually exceeds Obama’s fuel economy standards. It’s called the Tesla Model S, and it’s built by a company that’s had no problem building a successful business while employing U.S. employees working in a US manufacturing facility.

Of course, this doesn’t mean I necessarily agree that such fuel economy standards should be in place. The truth is, I’d rather see a real free market dictate fuel economy, not the actions of the government. But there is no real free market when it comes to transportation and energy. Never has been.

But that’s a debate for another time.

The bottom line is that repealing Obama’s fuel economy standards isn’t going to do a damn thing to save American auto manufacturing jobs. Most of which, by the way, are being replaced by robots, which means these jobs are never coming back.

If Trump really wants to help with domestic job creation, he should help enable a real free market where the government doesn’t pick winners and losers. But with Rex Tillerson and a bunch of wealthy Russian oil barons dictating policy changes in the White House, this is unlikely to happen.

Investing in Electric Airplanes
Now that electric cars have taken off, it's time for electric airplanes to do the same. Energy and Capital editor Jeff Siegel discusses the rise of electric airplanes...
Tesla Delivers 100 MW in 100 Days, or It's Free!
Energy and Capital editor Keith Kohl looks into Australia's ongoing energy crisis, and how Tesla's Elon Musk has promised to solve it.
Buffett's Biggest Renewable Investment
Berkshire Hathaway Energy just made a major deal. Energy and Capital editor Keith Kohl takes a closer look at the innovation that will finally put renewable energy on par with global energy demand.
Hydrogen Fuel Cells: The Downfall of Tesla?
Lithium has been the front-runner in the battery technology market for years, but that is all coming to an end. Elon Musk is against them, but Jeff Bezos is investing heavily in them. Hydrogen Fuel Cells will turn the battery market upside down and we've discovered the tiny company that is going to make it happen.